The weekend of June 23 marks Jimmy and (future) Dr. Bulldog paying CHeF KUBiAc a visit in Boston. The following account details our burger adventure in the first Quantum Lion semi-reunion.

As commencements at universities throughout the country draw to a conclusion, summer has officially arrived! What better way to kick off this red-hot season by hanging out with old pals, drinking some hard iced tea, and eating burgers non-stop?

Jimmy and (future) Dr. Bulldog arrived at Boston Logan International Airport separately, and made their way to Boston Burger Company in Cambridge to meet up with CHeF KUBiAc. The Killer Bee (featured below) and the Mac Attack were attempted: 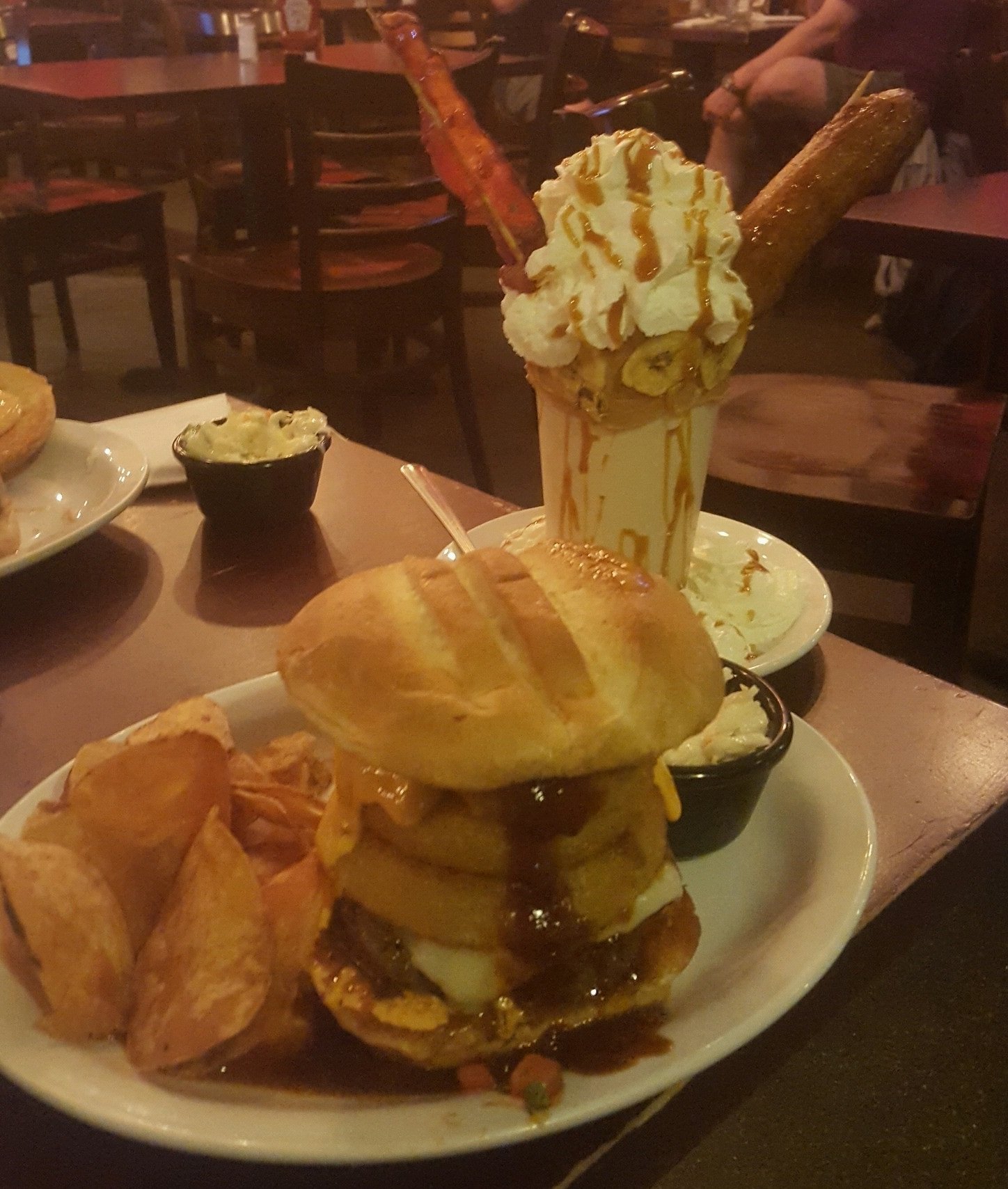 The Question of the Night: is Beantown’s Boston Burger Co. better than Pittsburgh’s Burgatory in CHeF KuBiAc’s mind? “No.” But it came close! #Yinzersrulez

The day began at Quincy Market, where we visited the Pepper Palace and tasted a wide variety of hot sauces. Interestingly, (future) Dr. Bulldog almost succumbed to The End upon walking out of the stores, stumbled around and knocked over several chairs and table at the busy tourist attraction. The red-hot spicy time bomb was readily diffused by a Presidio Passion at Ghirardelli Chocolate. The trip was quite worthwhile in spite of the slight mishap, as we acquired some spicy additions to our cooking ingredients: the Trinidad Scorpion Pepper growing kit, and Monster Mash Reaper. The former is amongst plans to be featured on this food blog in the future. 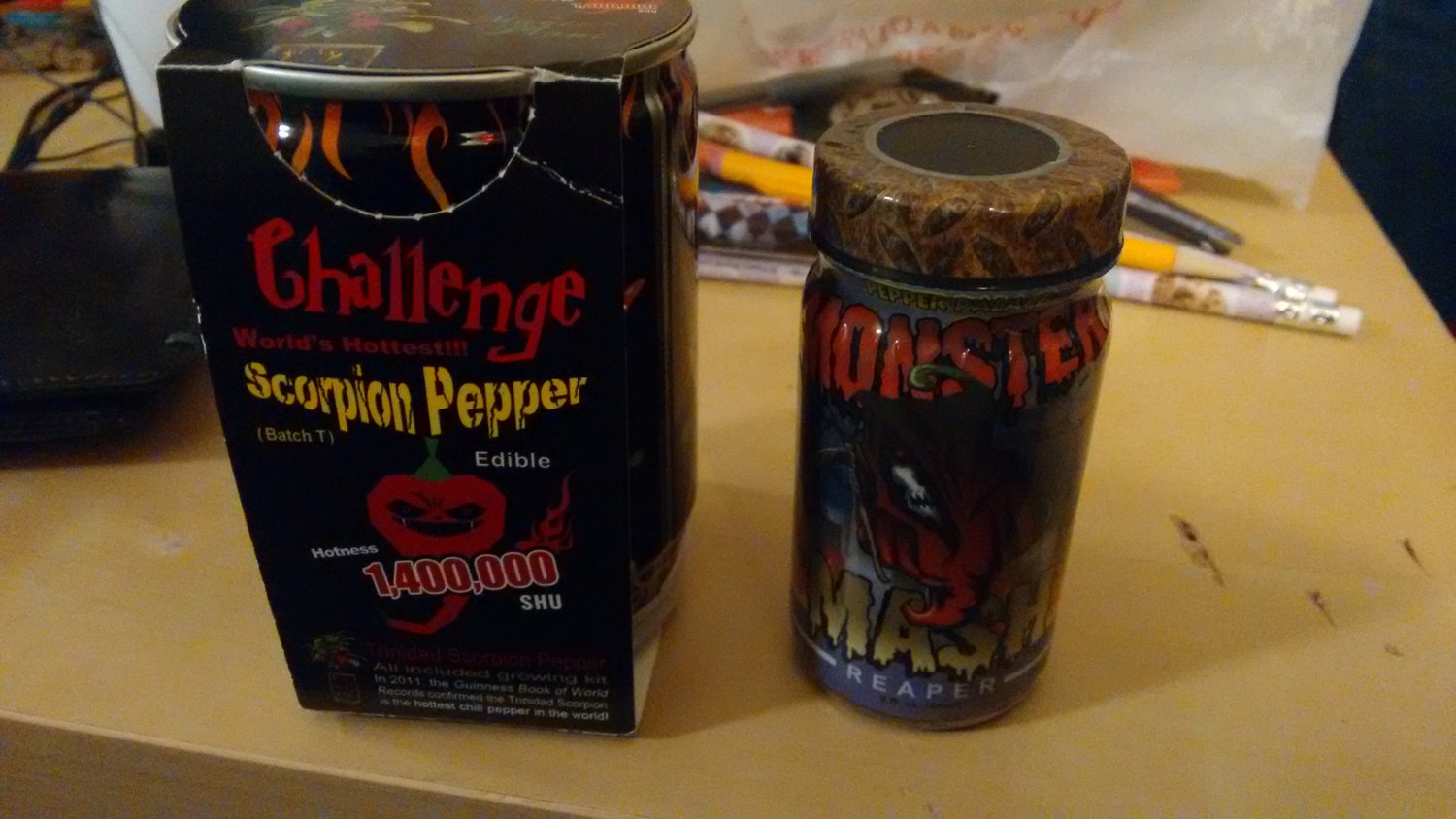 After roaming in Boston for several hours, we travelled to Eagle’s Deli in Brookline to attempt one of their signature gigantic burgers: 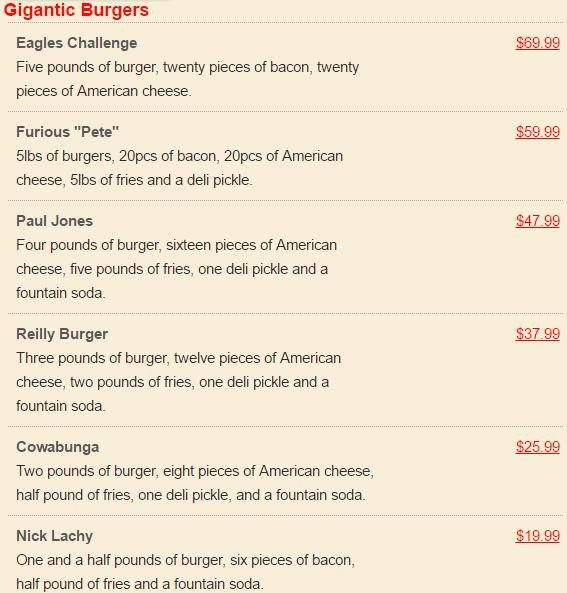 The choice was between the Paul Jones Burger and the Reilly Burger; we eventually chose the latter since the prospect of eating 5 pounds of fries was terrifying, and one of us cough was still severely weakened from an event earlier that day. 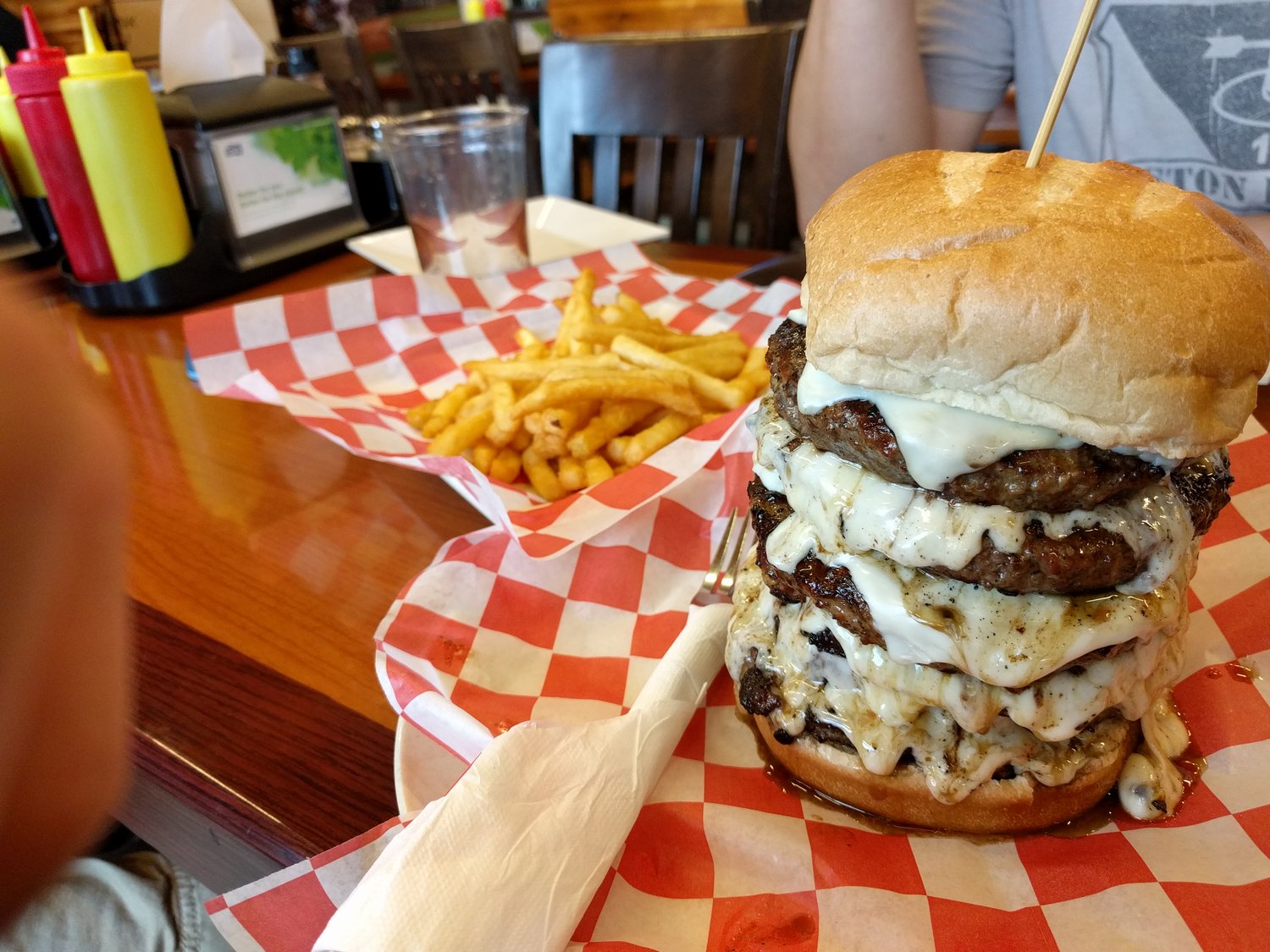 It turned out the 3 lb burger was easily consumed by us, and we were certainly not served the 2lb of fries stated in the menu. Otherwise, it was one juicy burger.

The visit culminated in the creation of our own somewhat insane cheeseburger on our last night.

I had already mentioned our 2014’s ten pound burger – the original Quantum Lion Epic Burger – in my last post. Instead of making a bigger one, it was decided that we should make our burger as creative as Quantum Lion-y possible.

Sesame seeded buns were replaced by grilled cheese sandwiches, stuffed with various snacks we ransacked from the frozen aisle; mac & cheese filled up the inside of the beef. But other traditional aspects were kept, including the strategy to use a double-decker-patty design, and the shameless and lavish usage of bacon strips. 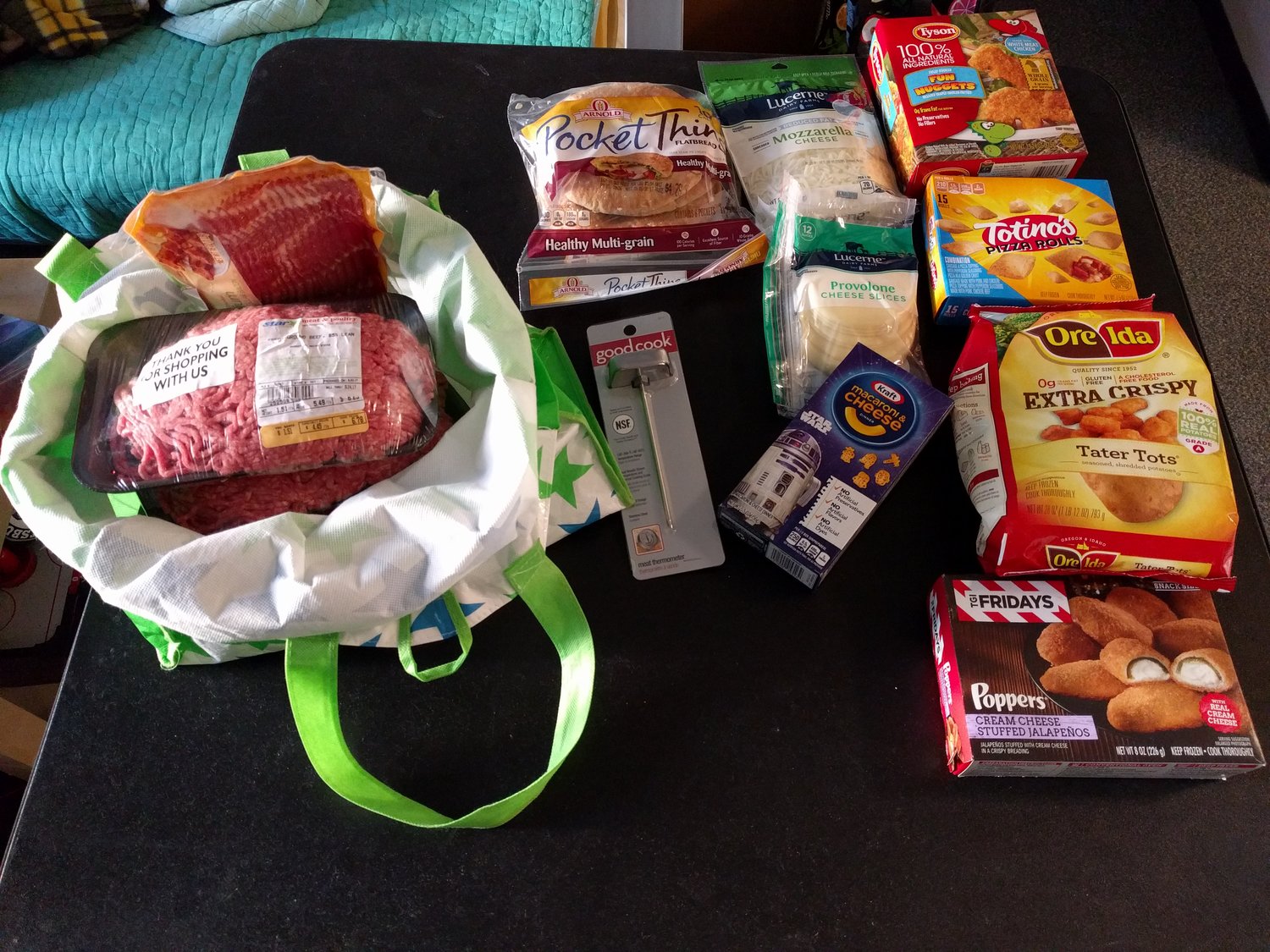 Star Wars-themed Kraft Mac and Cheese was used. The macaroni was cooked in seasoned boiling water for 12 minutes, and the water was drained. 0.5 tablespoon unsalted butter, 3 tablespoons of fat-free milk, and the cheese mix was added to the cooked macaroni and mixed well. Look at R2D2 go! 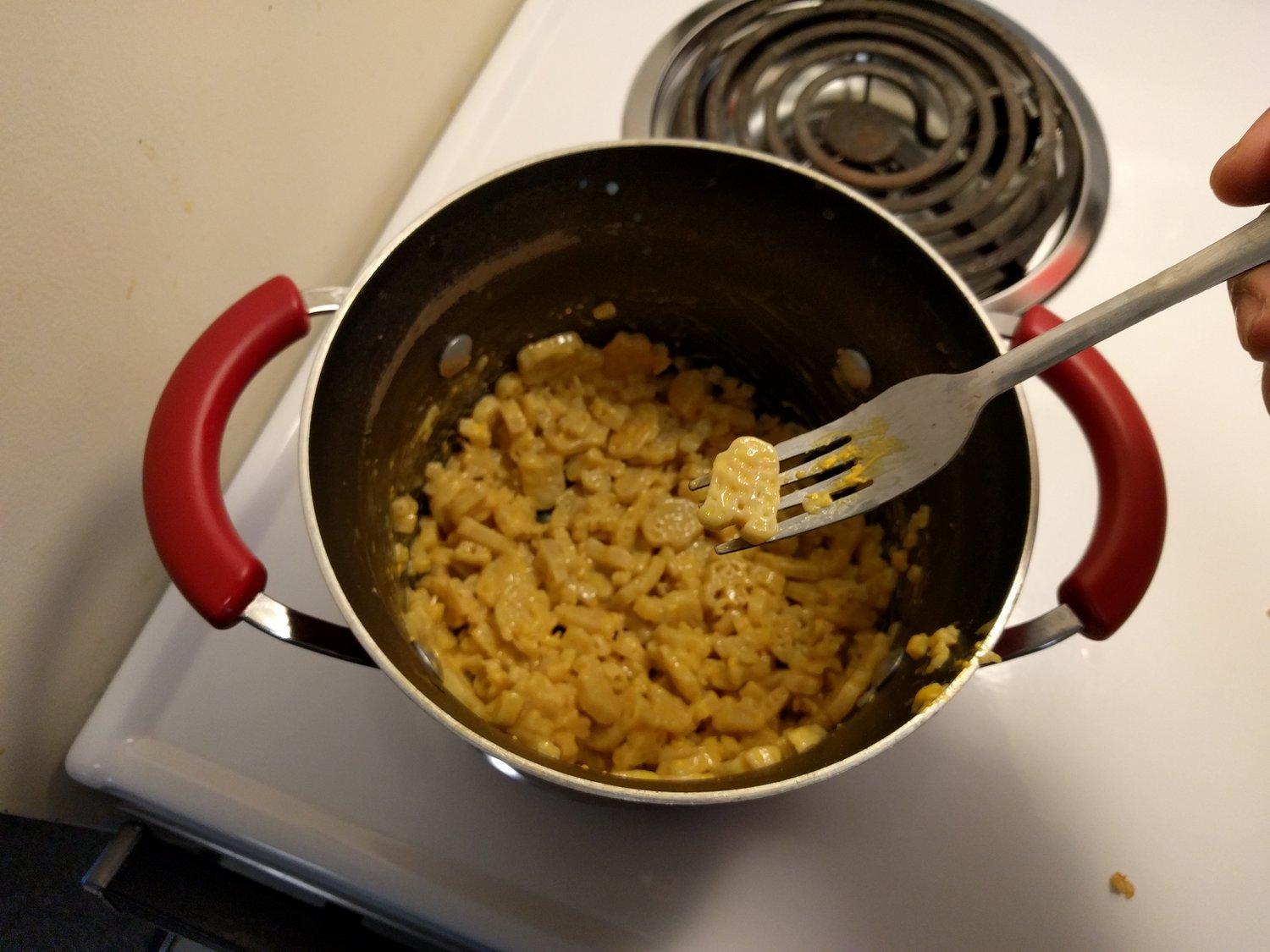 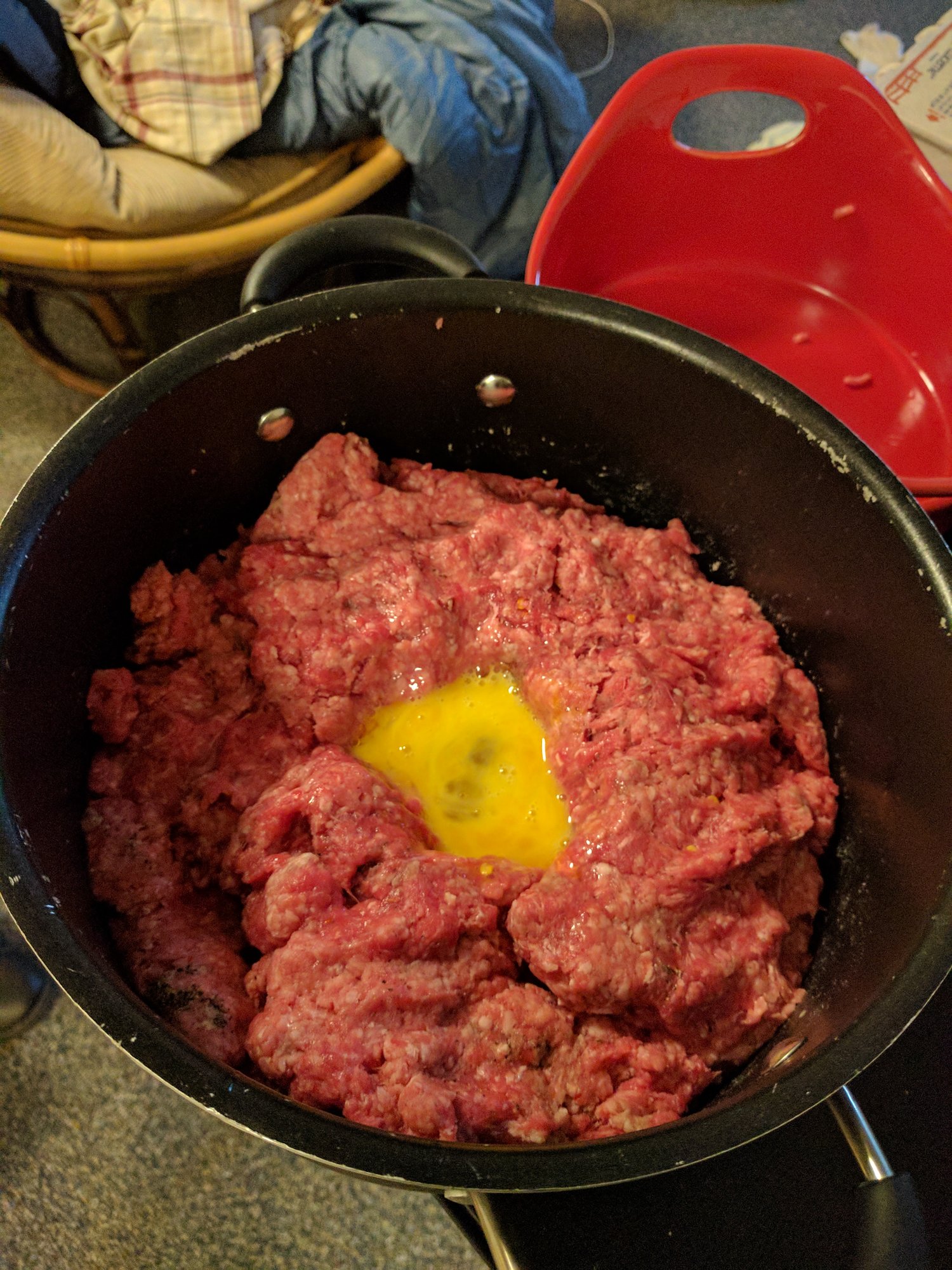 A 13” x 9” baking tray was lined with aluminum foil, and was divided in the middle with an aluminum foil septum width-wise. 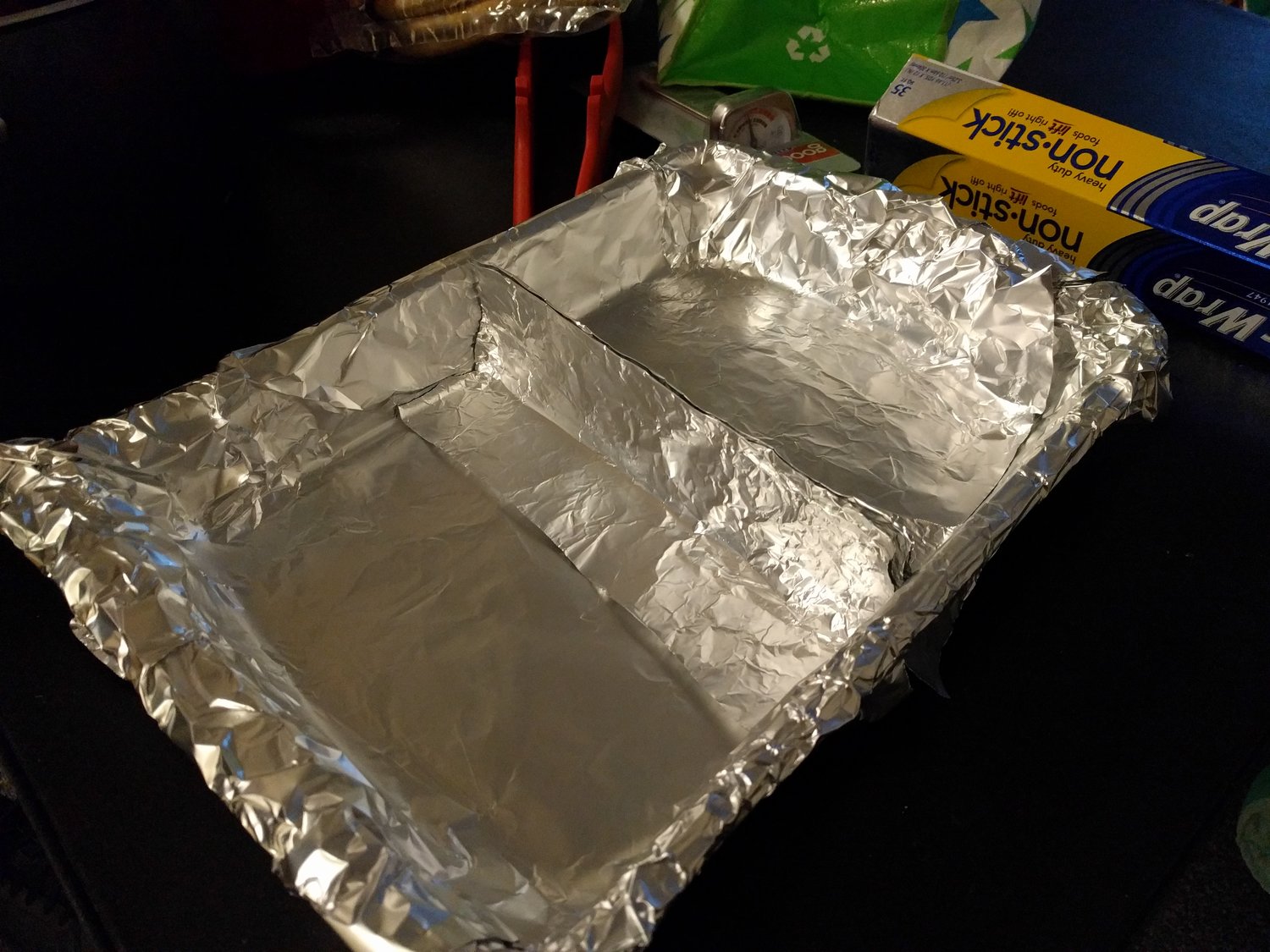 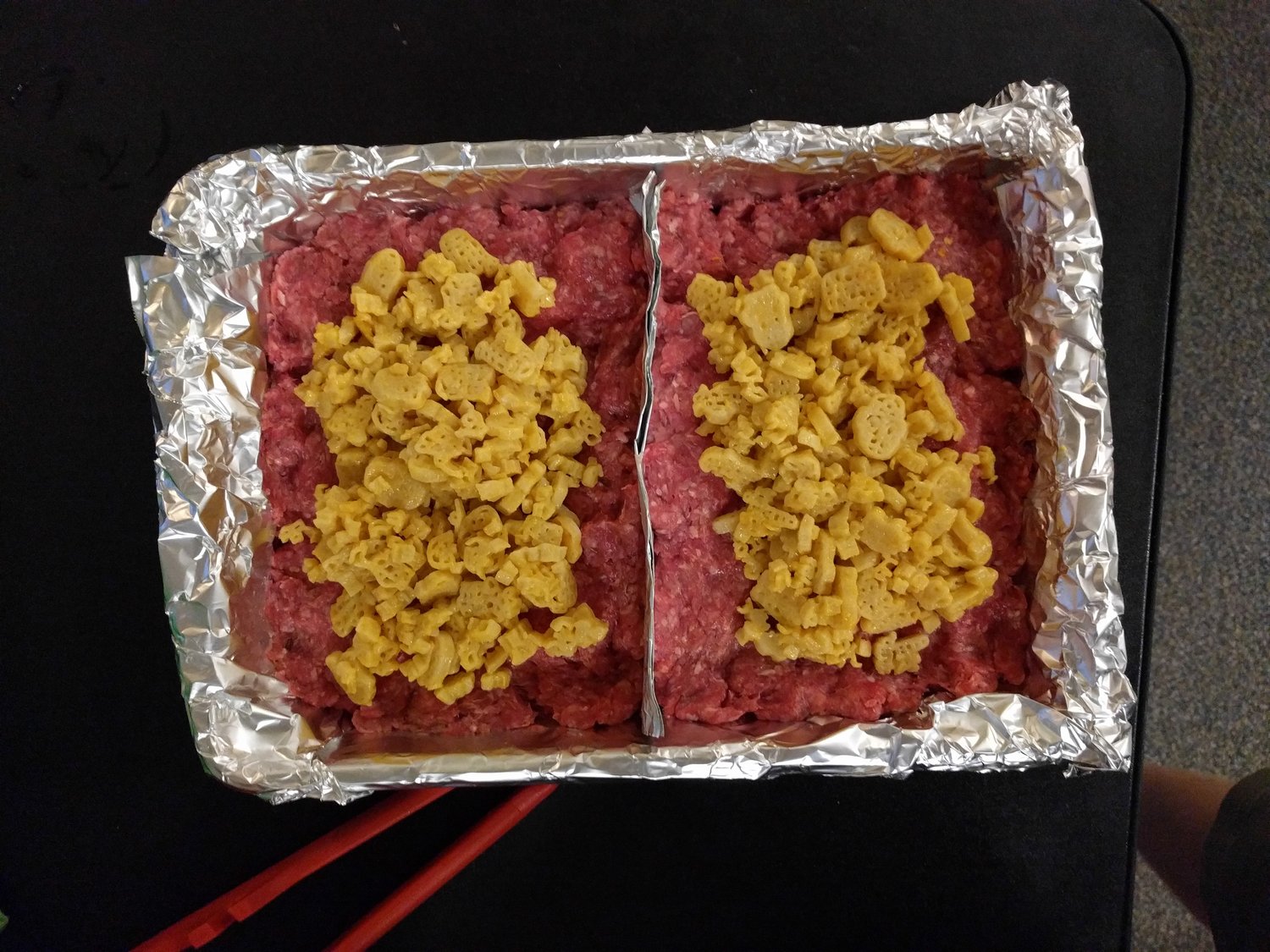 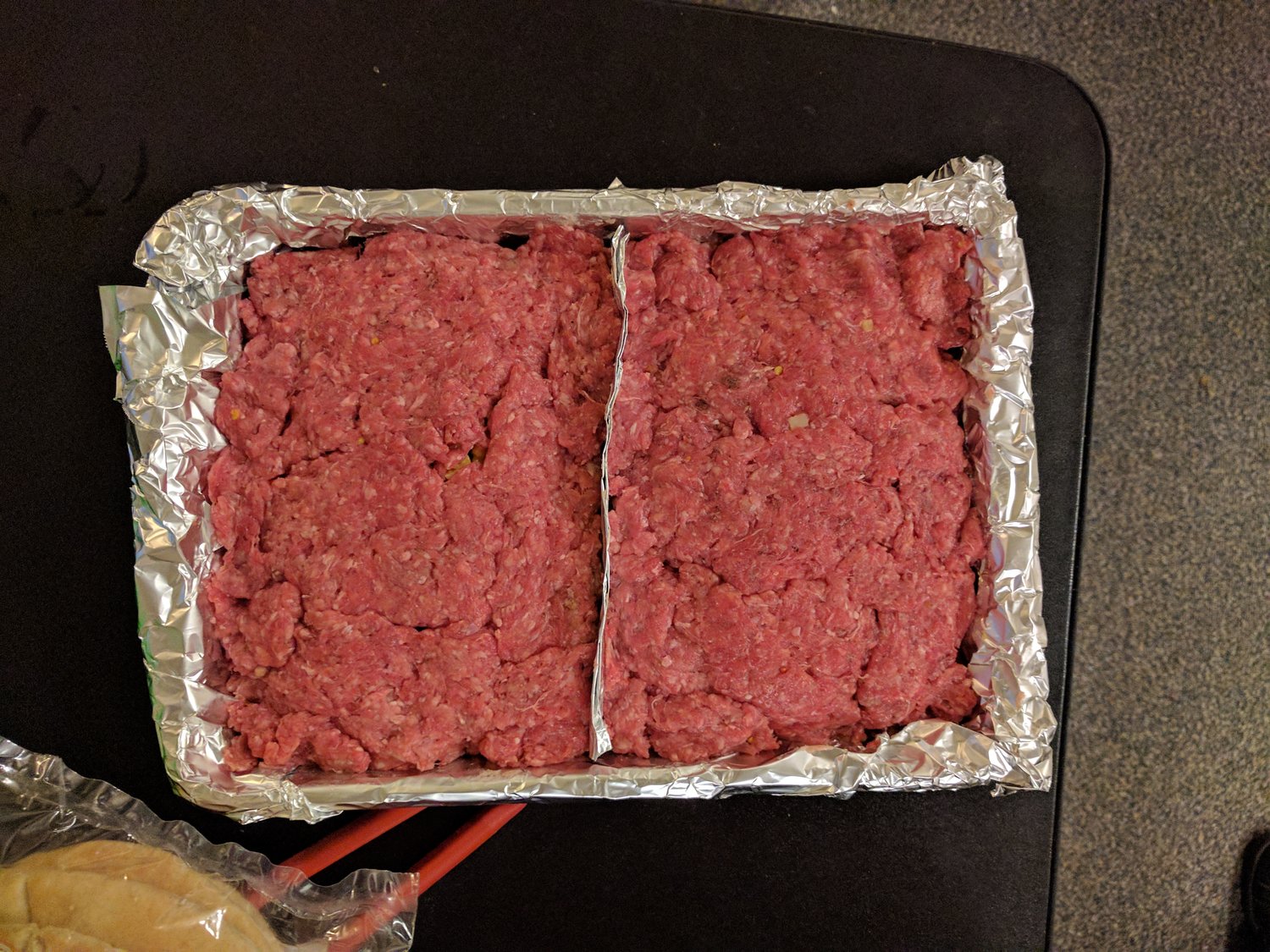 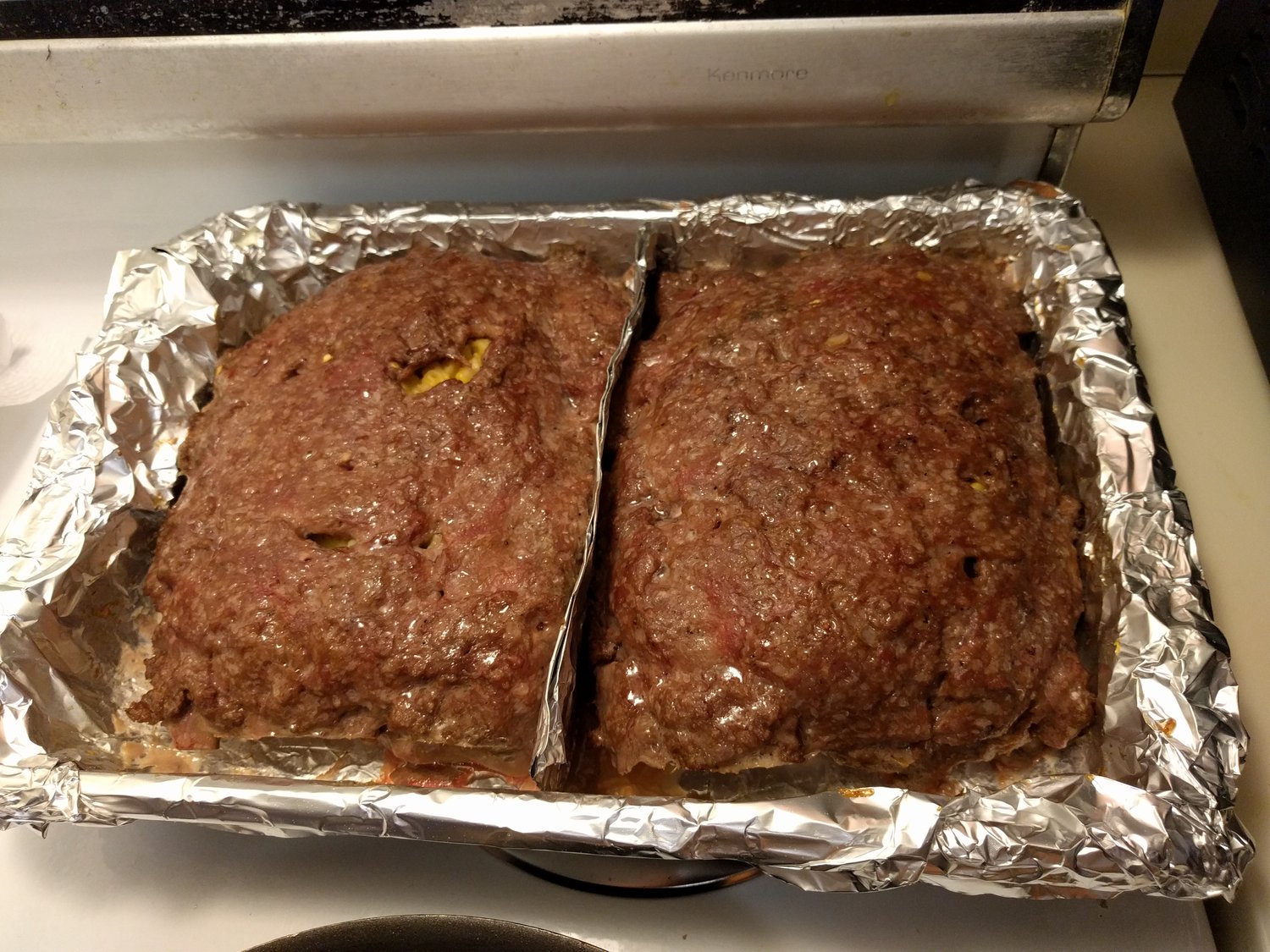 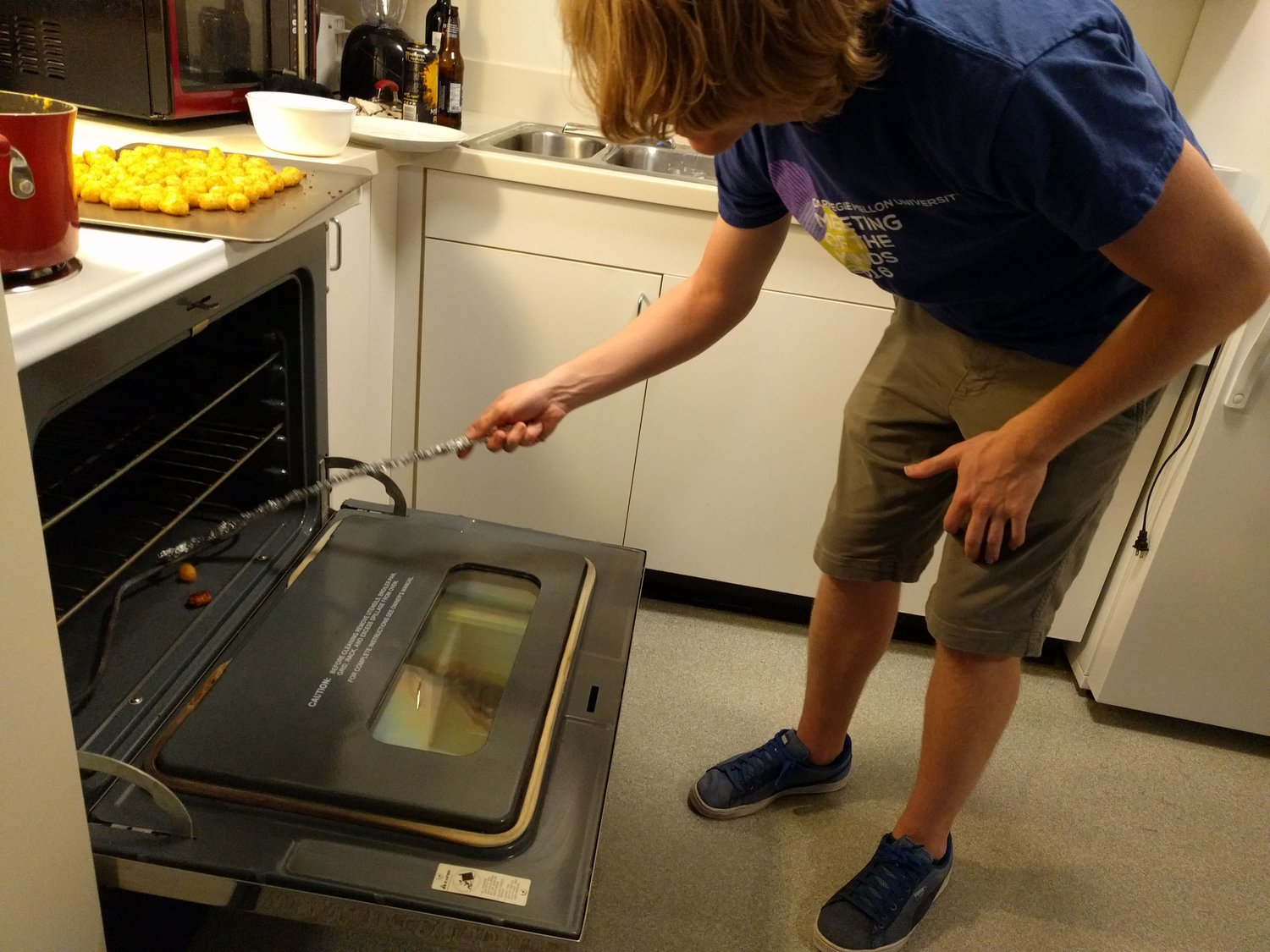 Shredded mozzarella cheese was lined up on the inside of each flat bread pocket. Tater tots were then added to the pocket, and more mozzarella was added to fill the inside. The process was repeated for the pizza rolls, Dino chicken nuggets and jalapeno poppers to complete all quartet grilled cheese layers. 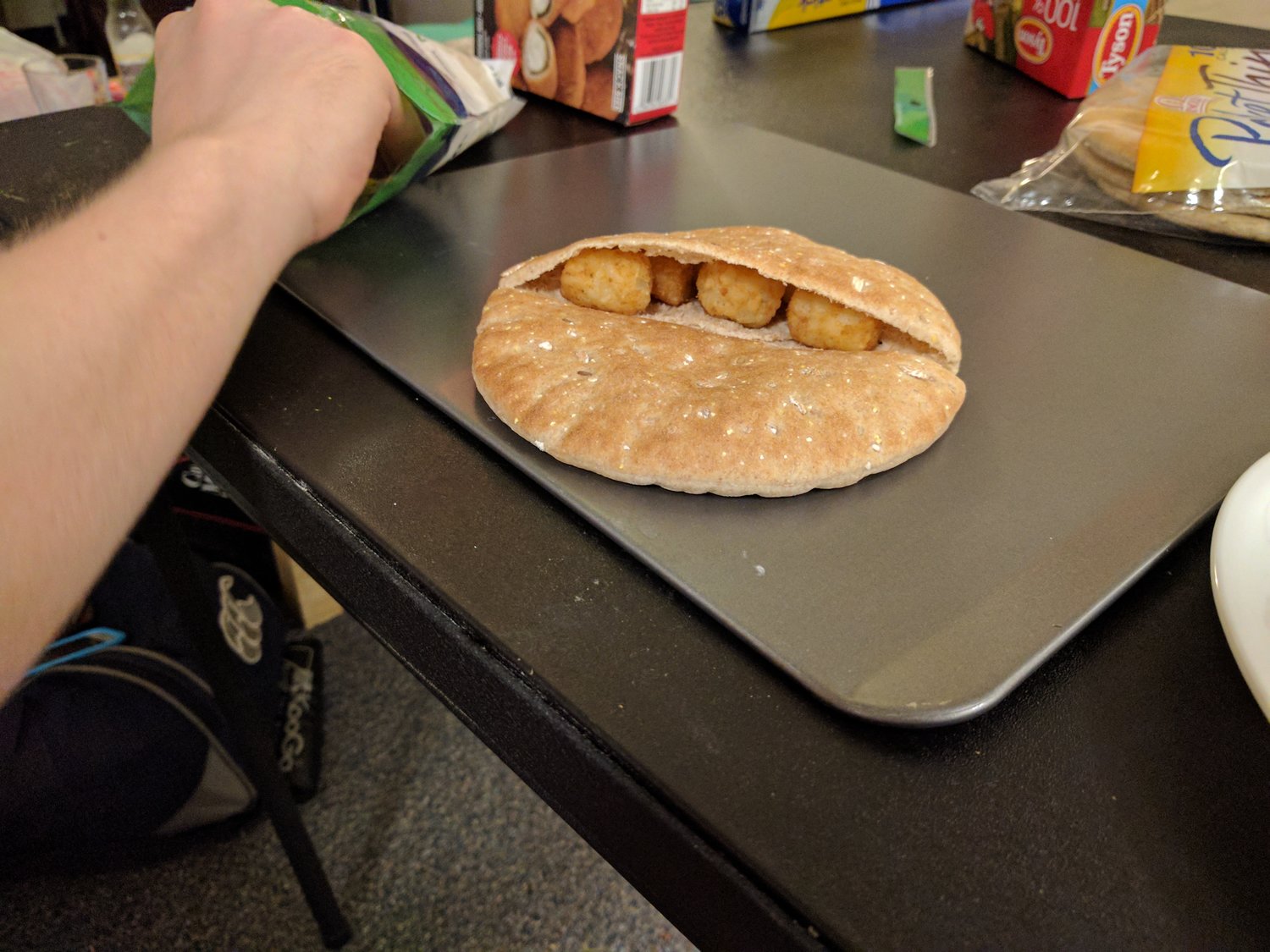 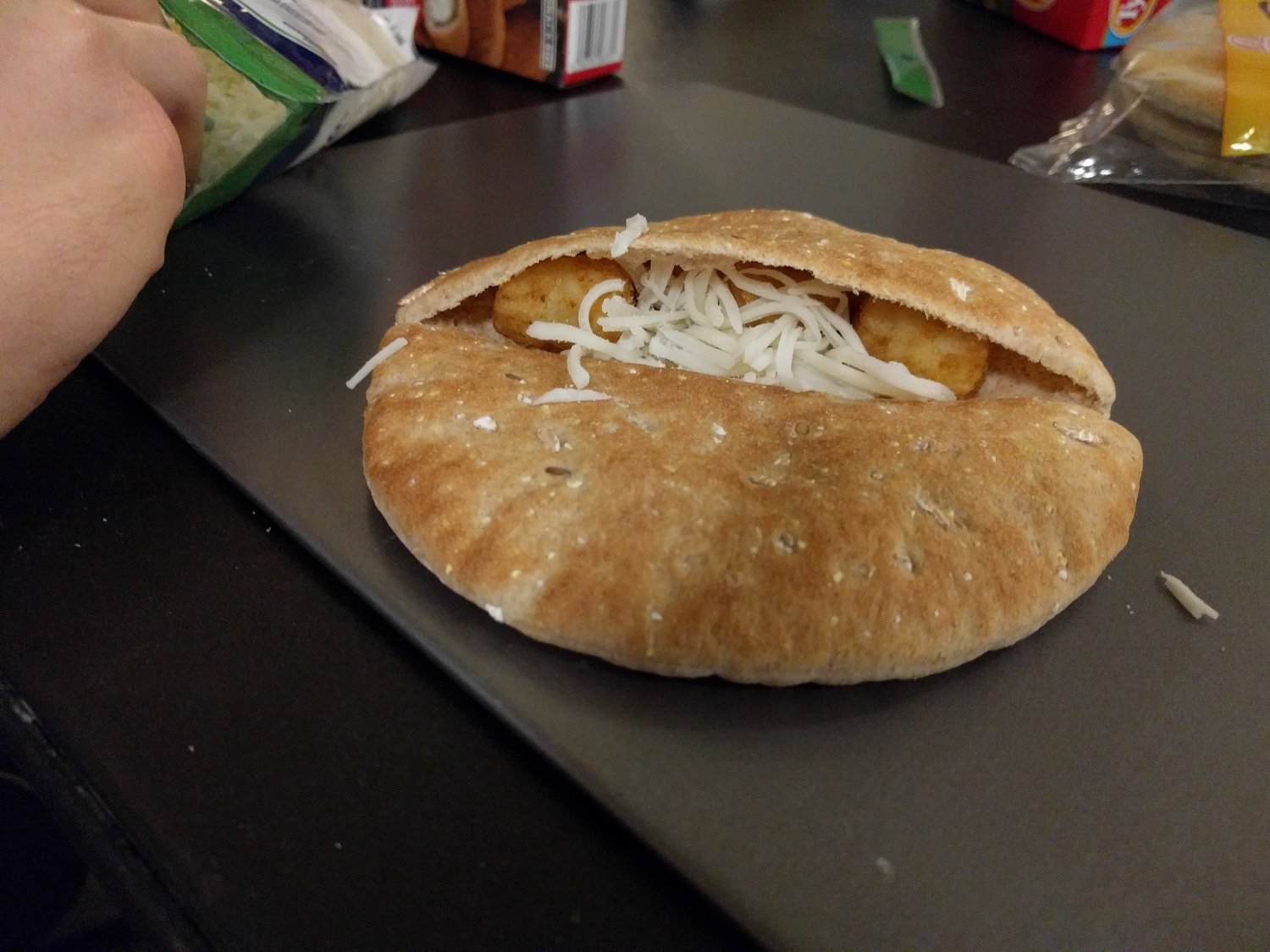 A knob of butter was melted in a frying pan at medium heat. The flat bread pocket with the tater tots, seam face up, was placed in the pan and topped with 3 slices of provolone cheese. The flat bread pocket with the jalapeno poppers, seam face down, was placed on top of the tater tots flat bread and the cheese. The “bottom bun” was cooked on both sides until a golden-brown surface was achieved on both sides, and the interstitial cheese was melted. 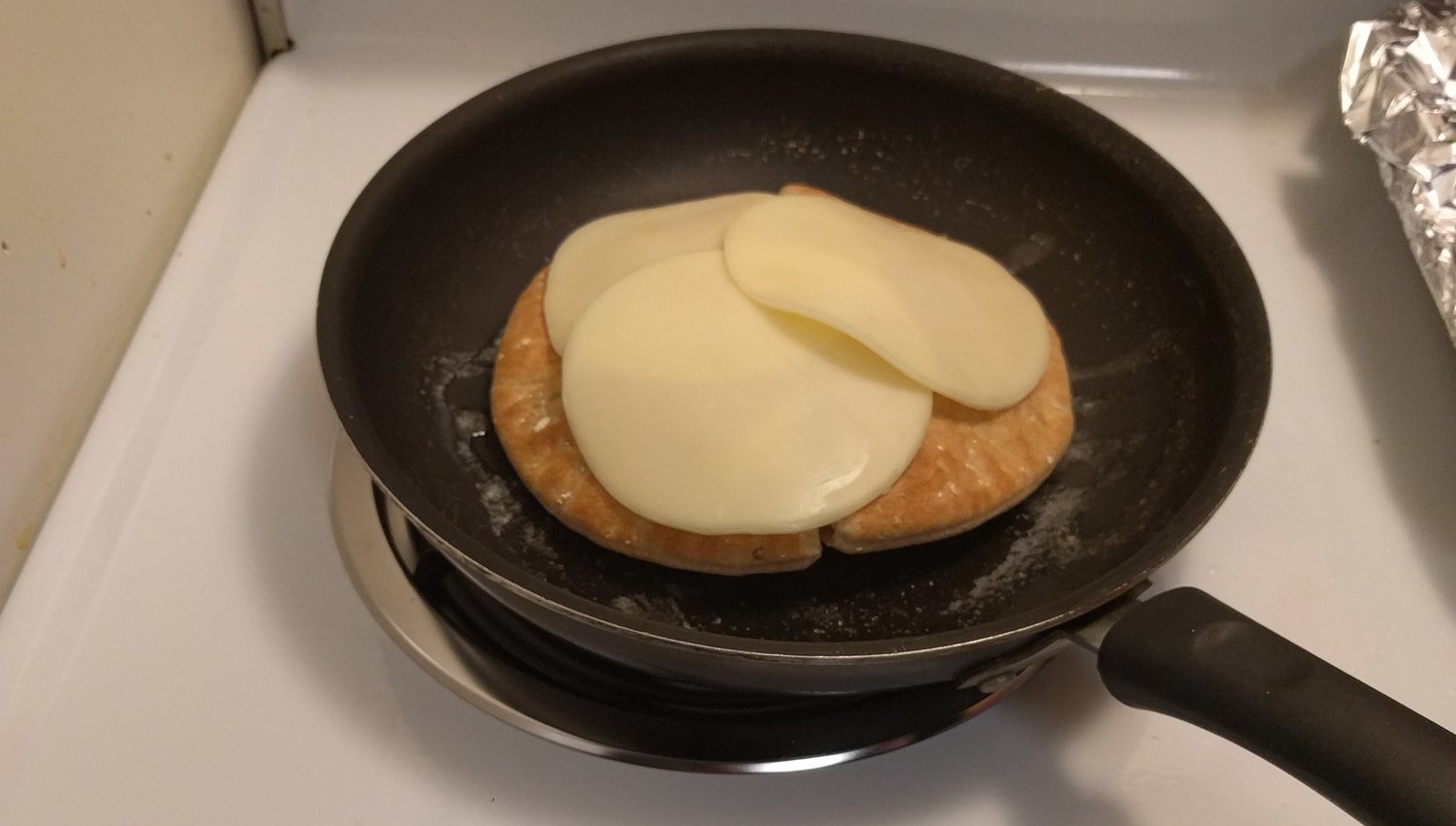 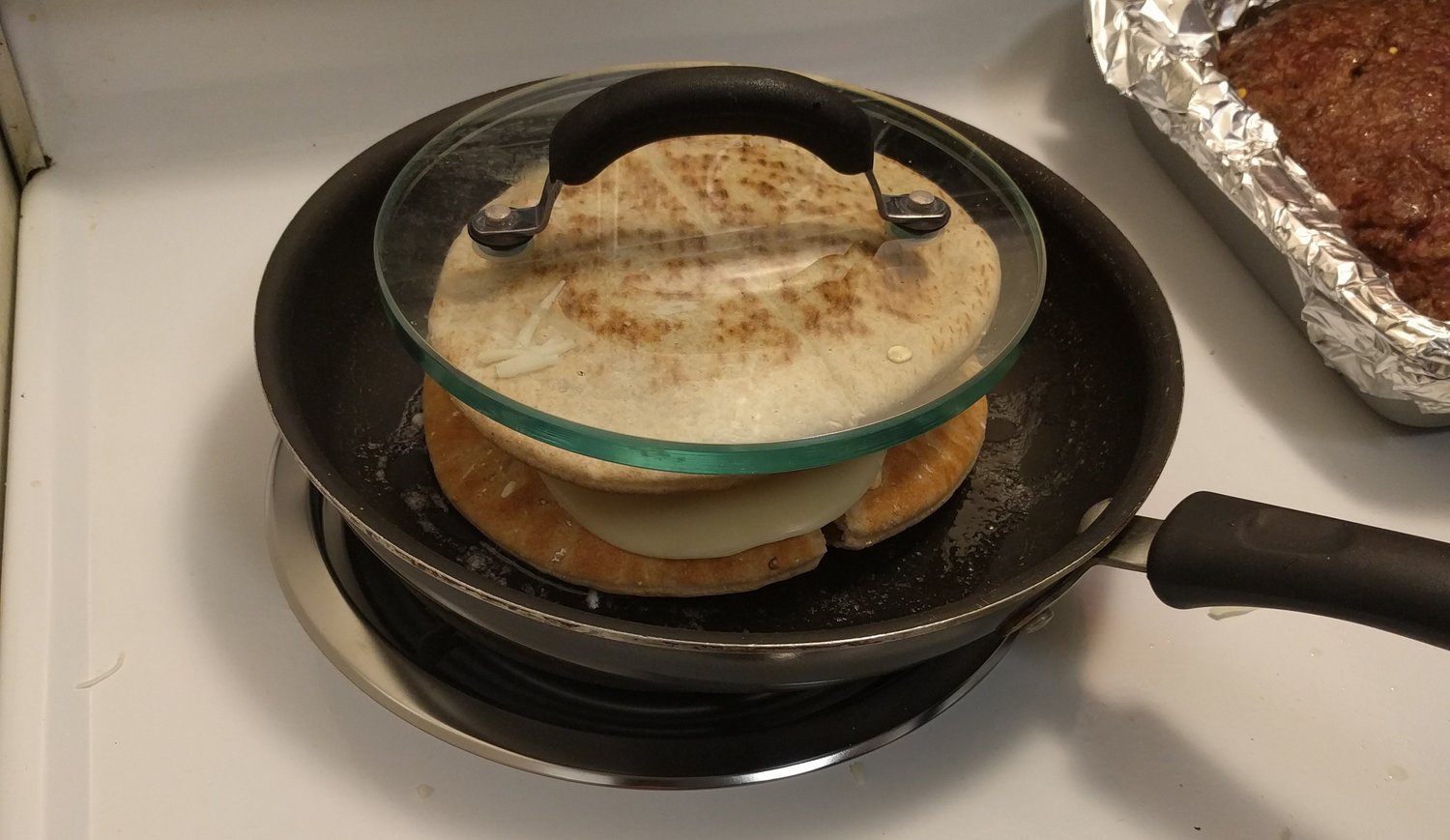 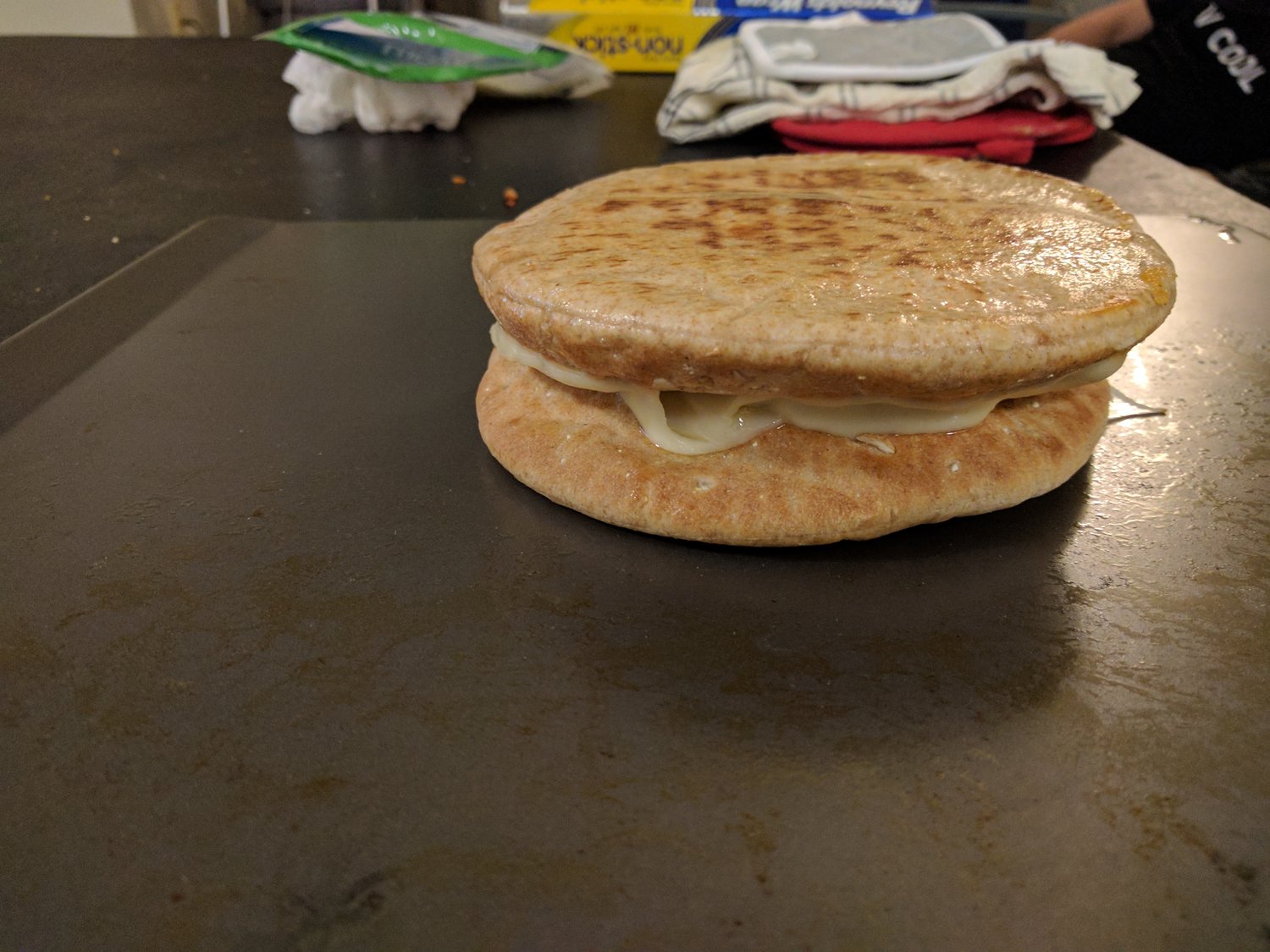 The “top bun” was prepared the same way using the flat bread pockets with the pizza rolls and the chicken nuggets.

Bacon was cooked on both sides until perfect crispiness was achieved. 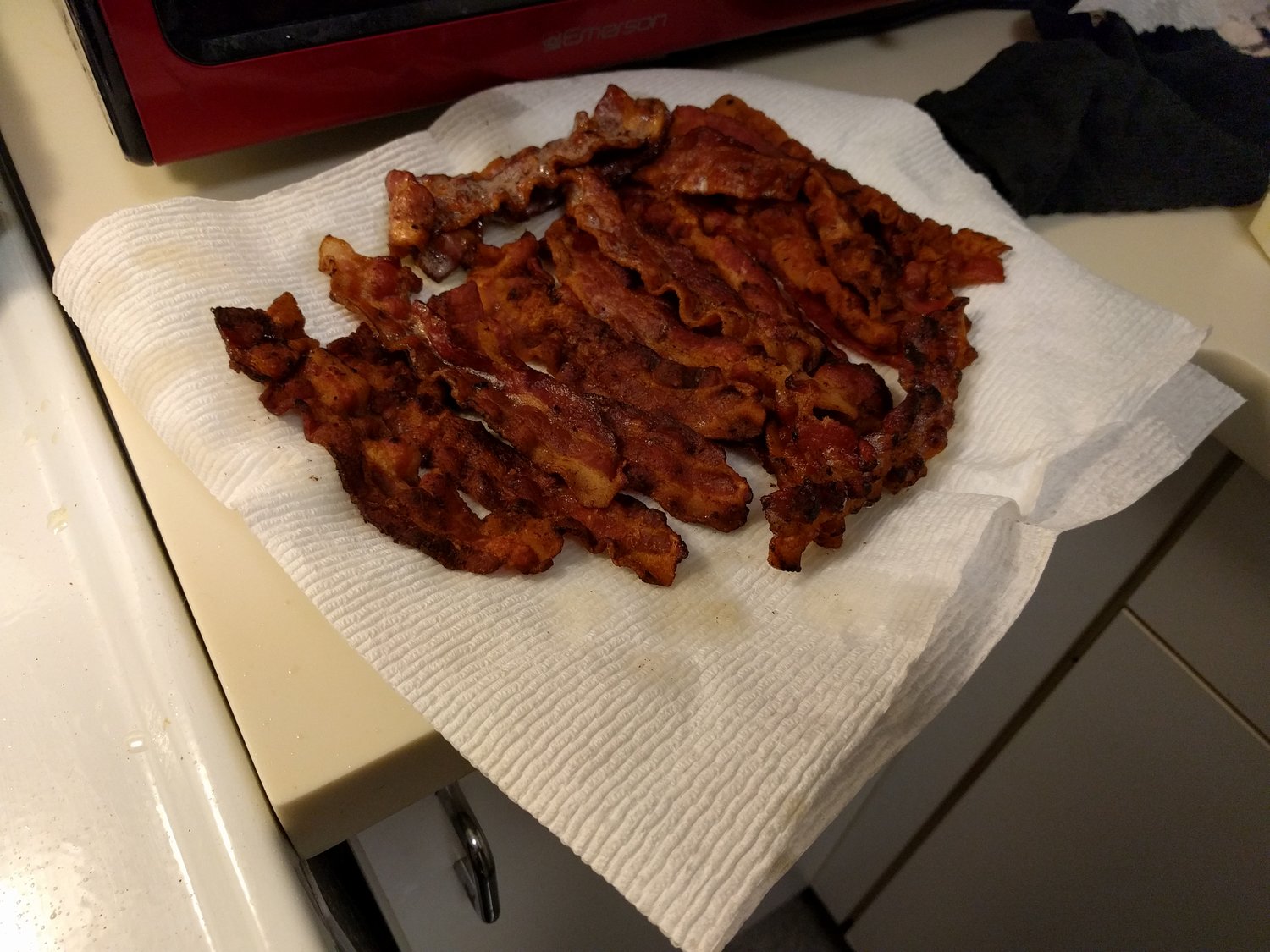 Bacon slices were placed on top of the bottom bun. 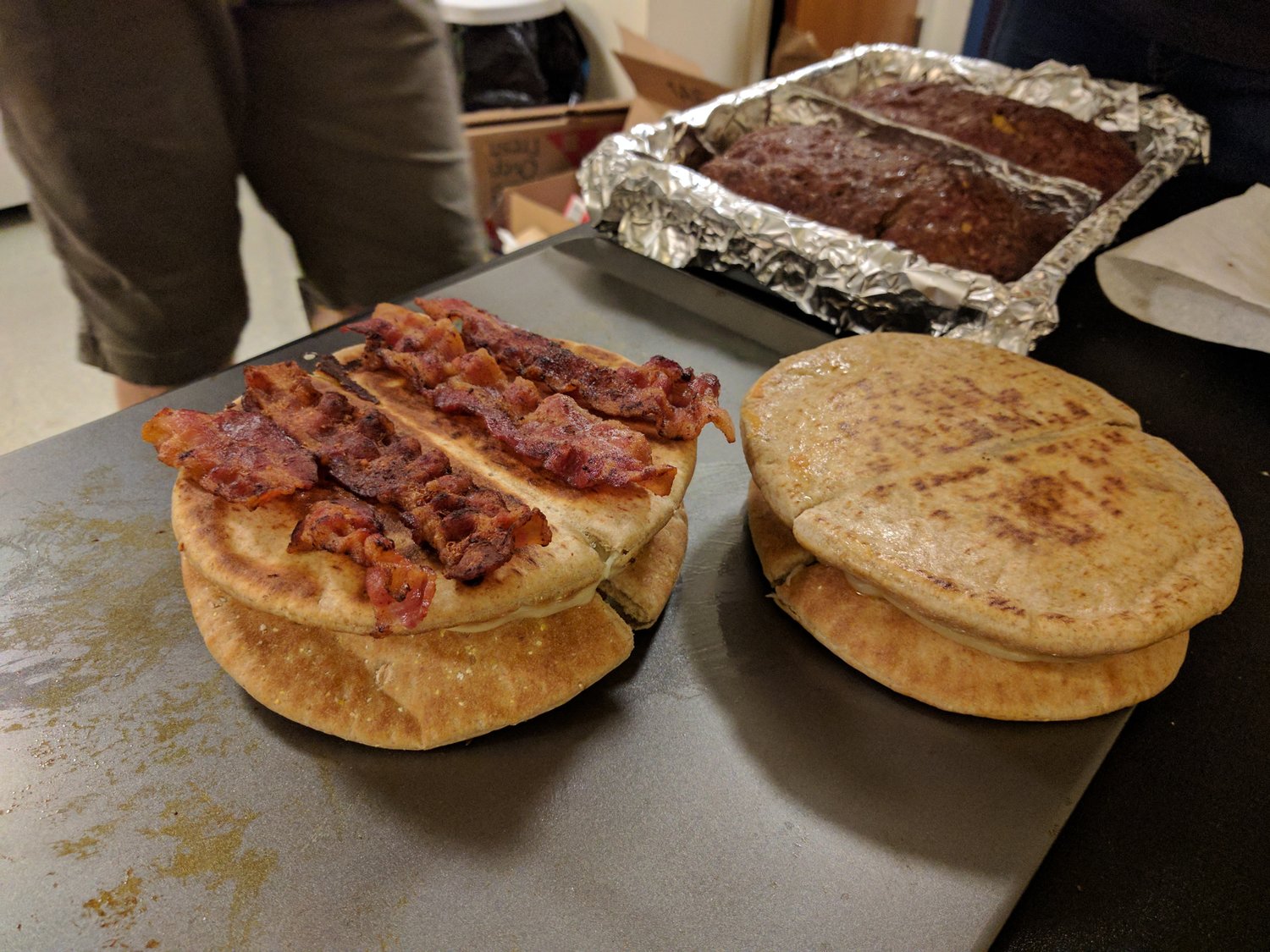 One beef patty was placed on top of the foundation, and was topped with provolone cheese and bacon slices. 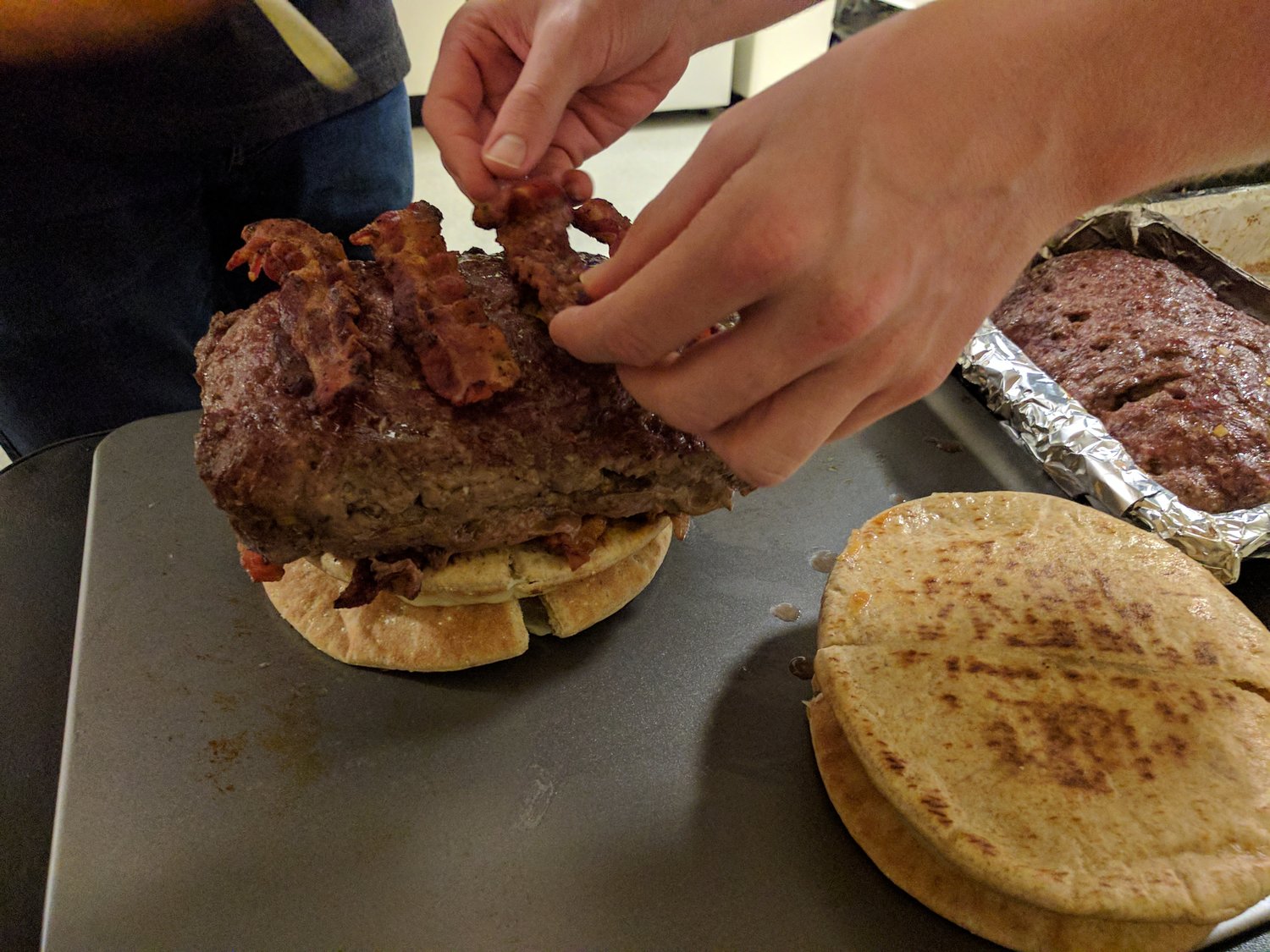 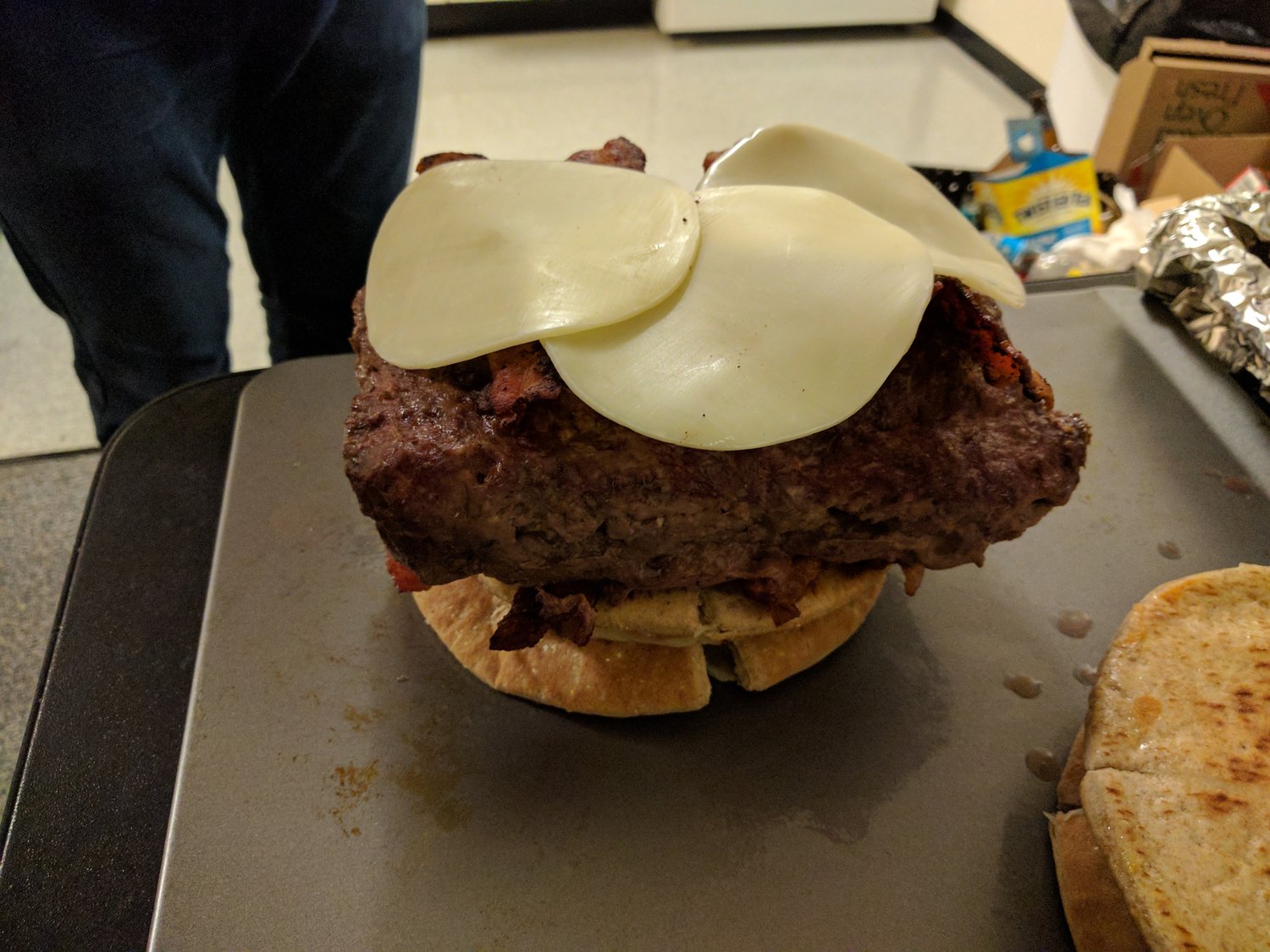 The second layer was assembled in the same manner with the other beef patty and additional provolone cheese and bacon slices. 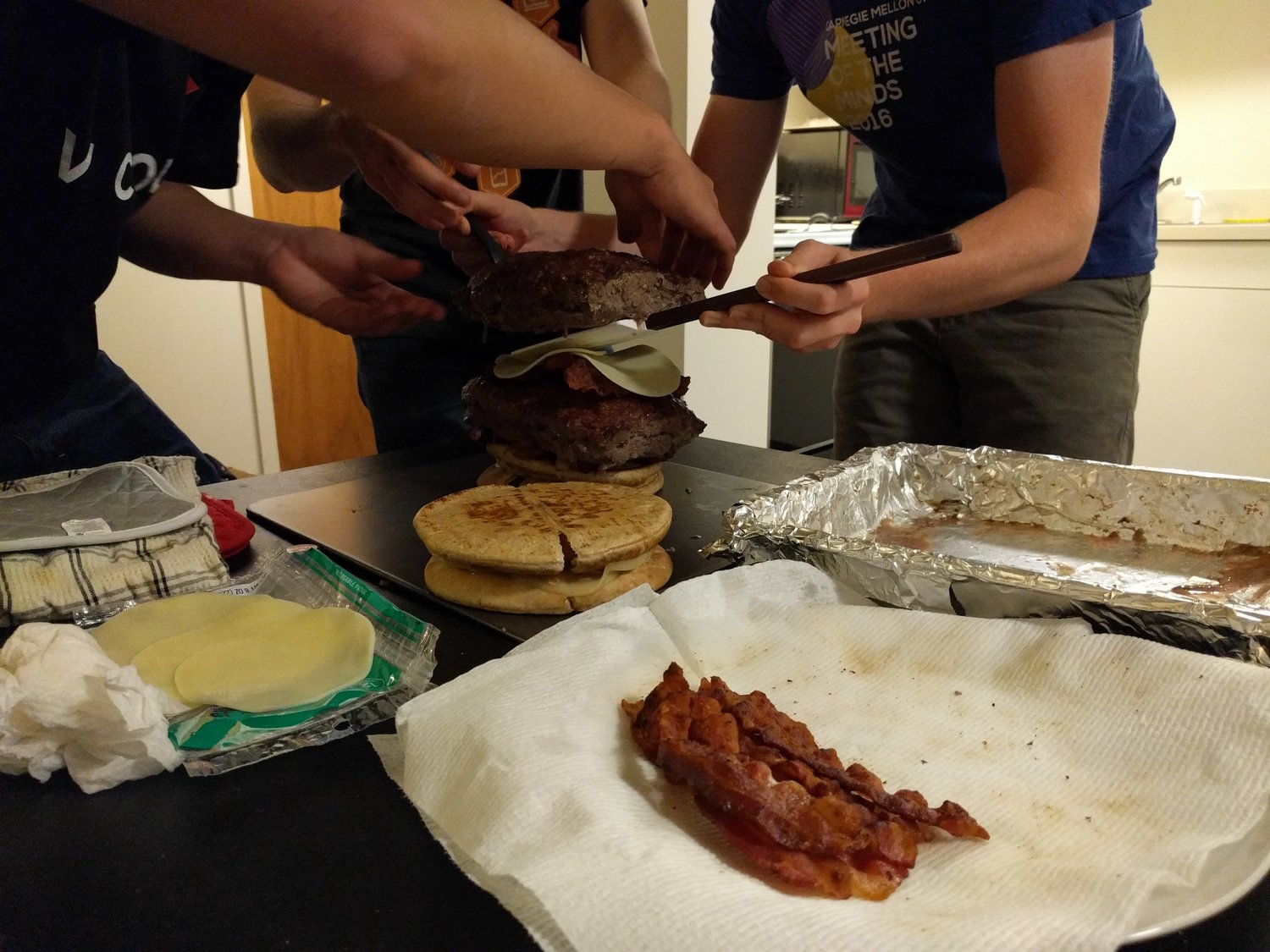 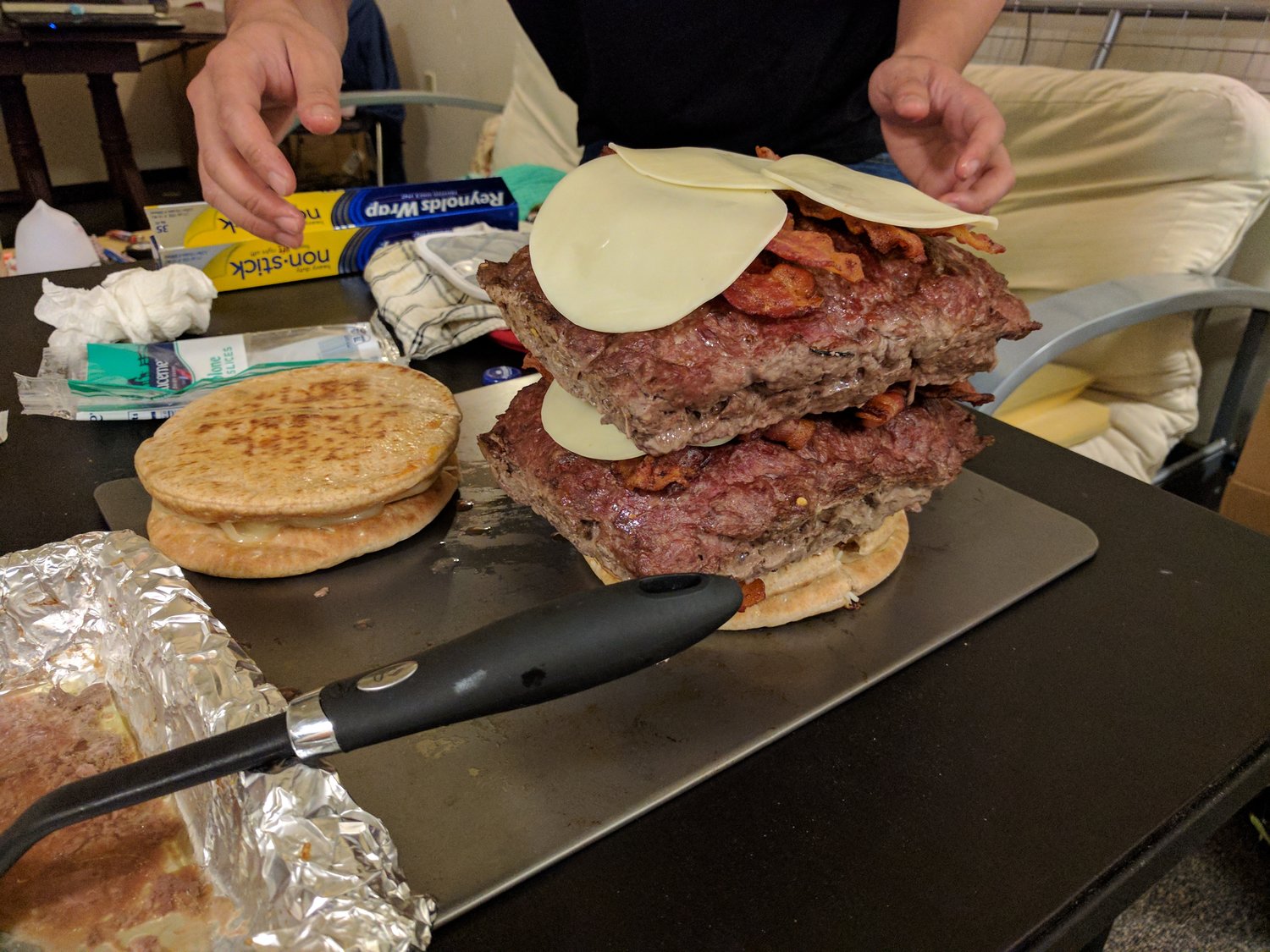 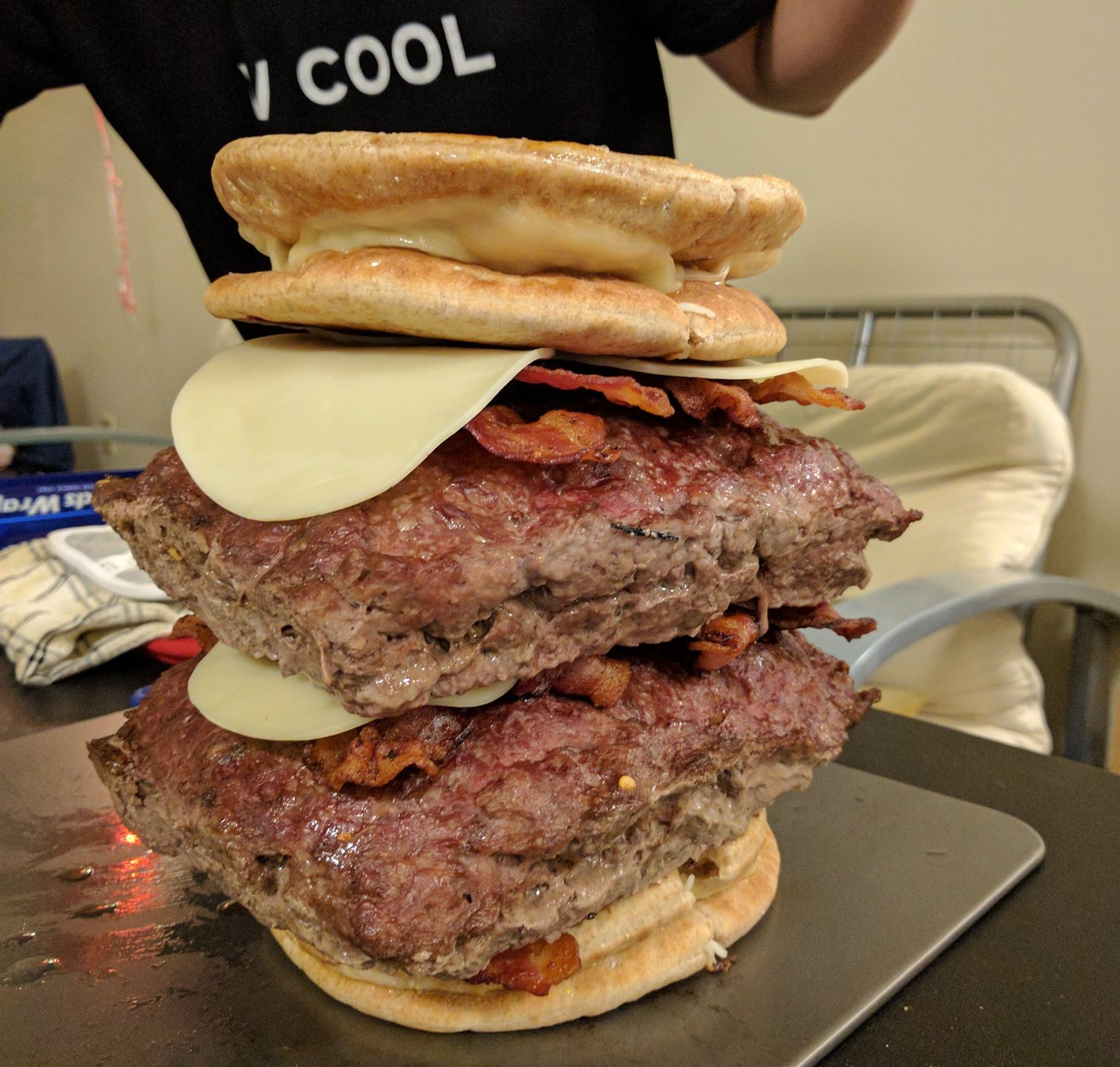 Only the best burger deserves the best knife. #plaid 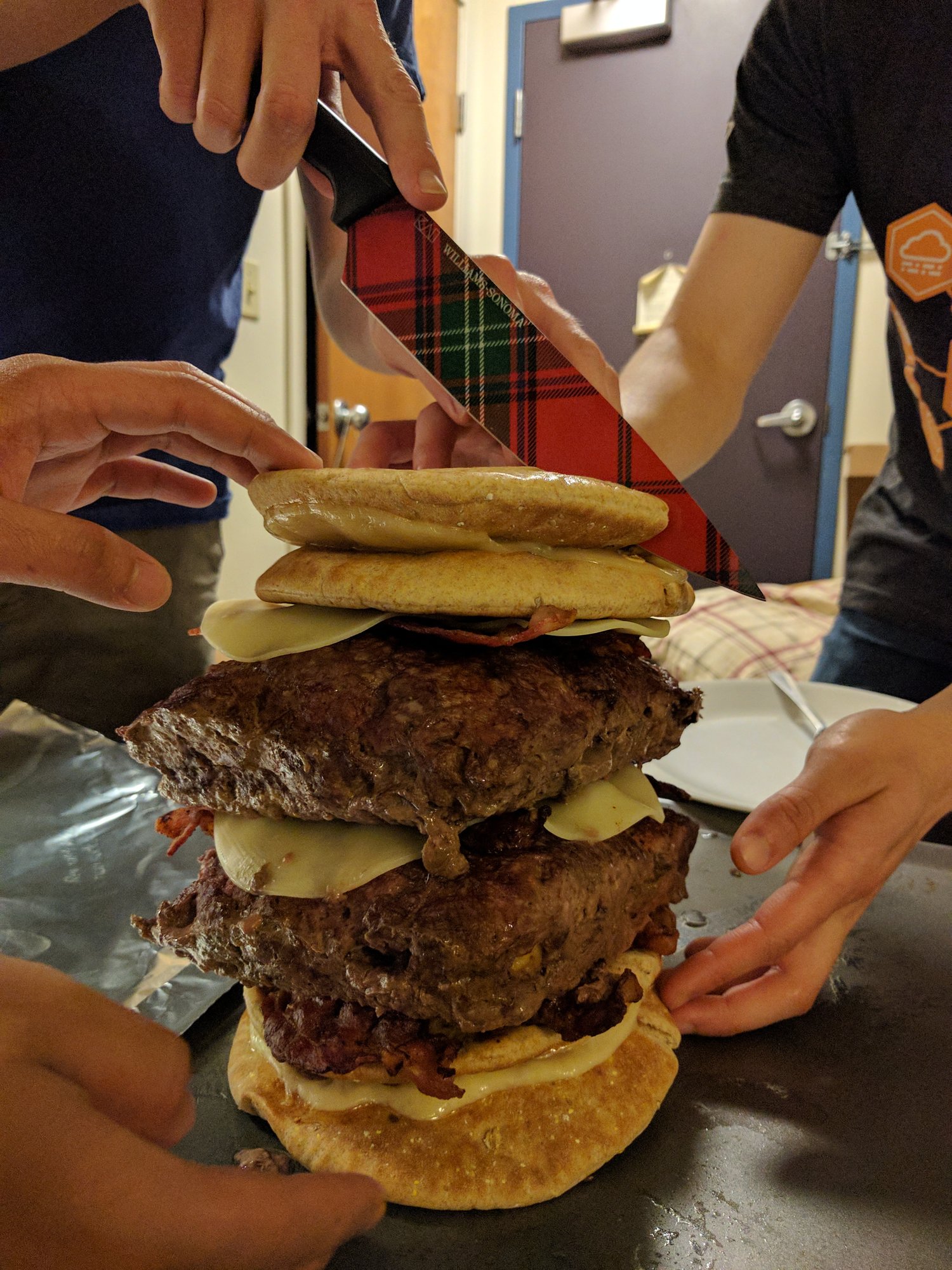 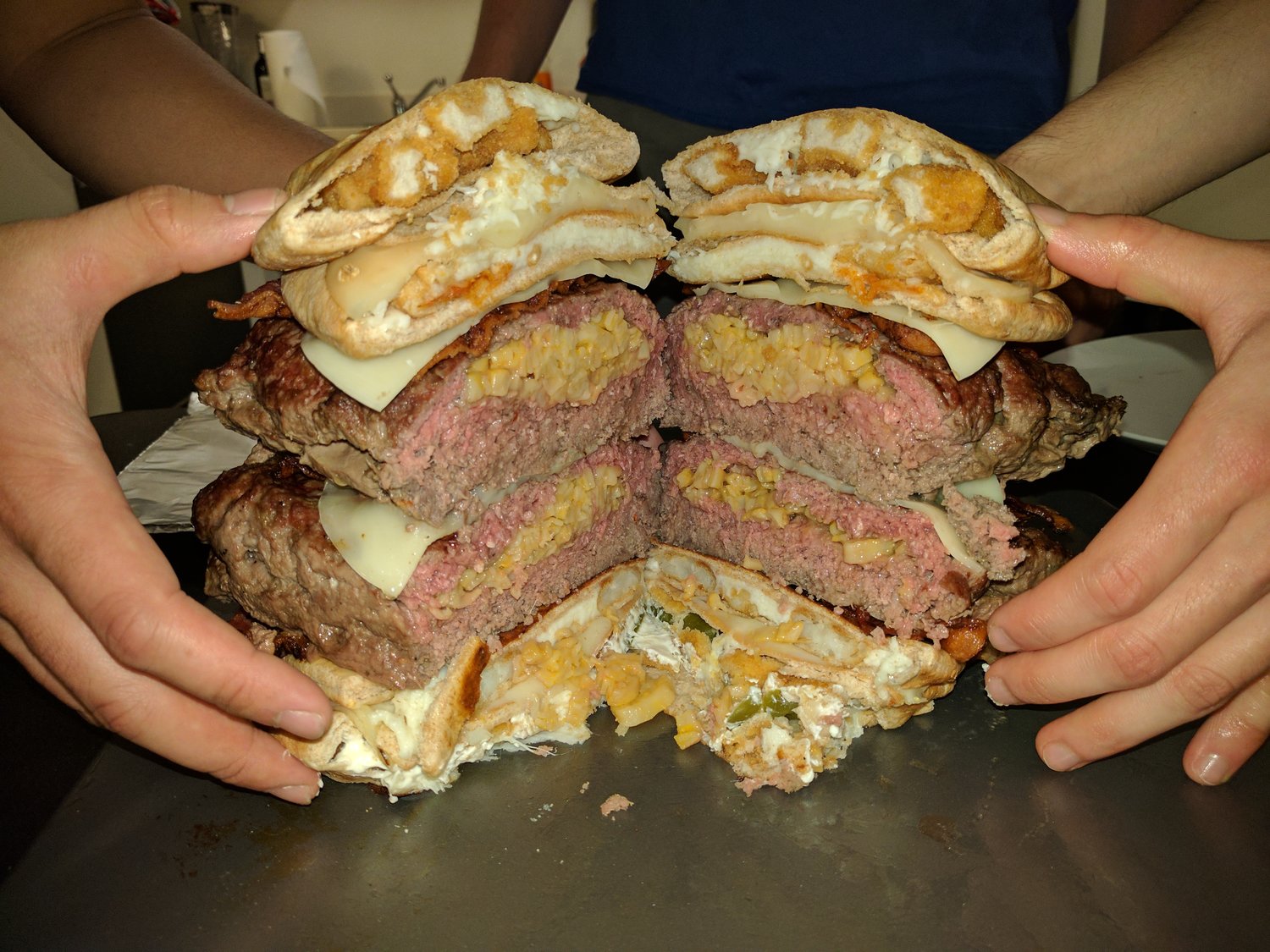 While the QL Epic Burger 2nd gen does not outweigh the original QL Epic Burger, it was certainly more cleverly designed and as epic in its own way.

While the buns were home-made in the Original, we were stripped of that option due to limited time. Several ideas were considered, including replacing the buns with pasta (yes, you read that right). In the end, it came down to the question: how to make a cheeseburger cheesier? Cheez up the meat and the buns!

Jimmy has previously explored incorporating cream cheese, and grated Parmesan and Romano into meatballs with great effect (Quantum Lion, 2016). However, it was feared prolonged cooking of the patties in the oven would result in significant cheese leaking. Therefore, mac and cheese was adopted. We had previously shown in our Meatball Deathstar project (featured below) that ground beef held in cheese-absorbed pasta and red sauce very well, so we were confident our beef patties would perform similarly. 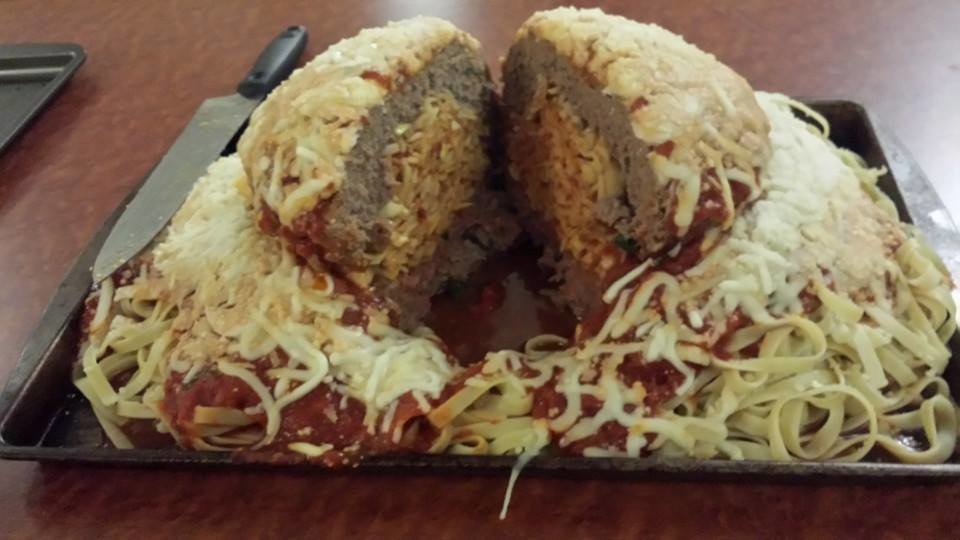 We were not disappointed by the results: the mac and cheese was secured in the beef patties, and they provided an extra flavor to the meat. In the future, cheese curds could be prepared ahead of time and replace the mac & cheese instead. 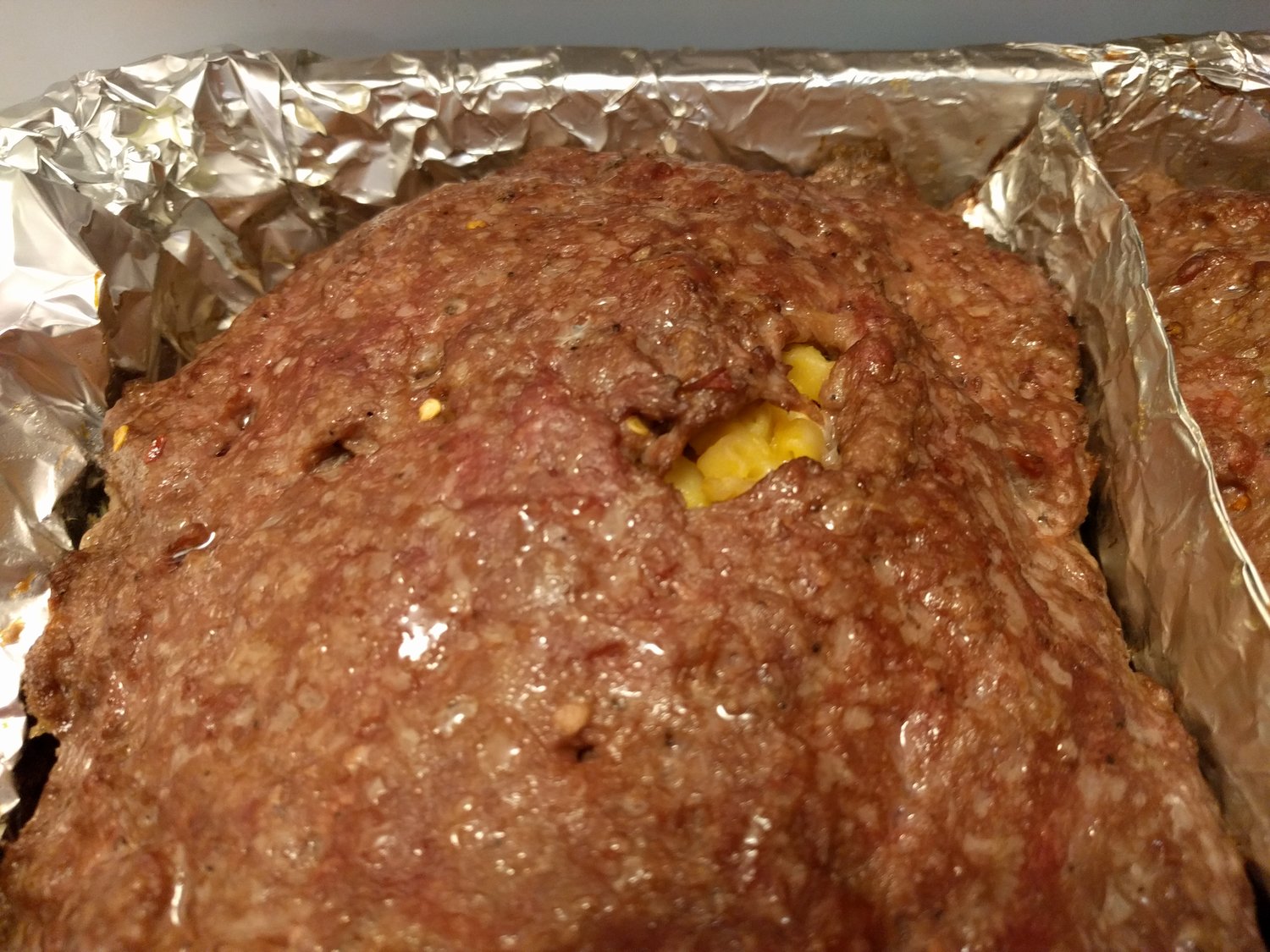 Using grilled cheese as buns was a radical idea, and stuffing them with appetizers made it more so. We were afraid the flat bread pockets would fall apart easily, so it was a pleasant surprise that upon grilling the mozzarella within and the provolone outside melted and held the buns together, allowing the successful assembly of Epic Burger 2nd gen. The choices for cheese were spot on. The buns were significantly smaller than the beef patties; bigger buns would be more appropriate in future experimentations. Additionally, bigger buns would also allow stuffing with more of the larger appetizers, namely jalapeno poppers and Dino chicken nuggets. Finally, instead of jalapeno poppers, freshly grilled jalapenos could be incorporated into the pocket, which would then be filled with cream cheese; the jalapeno heat would be felt more keenly this way.

The beef patties were cooked to a perfect medium-rare, as illustrated in the experimental section. This demonstrates the exceptional technical abilities the Quantum Lion Team possesses, and the progress we have made since the Original Epic Burger, which was cooked to well-done. Readers who prefer a more well-done burger should consider cooking the beef for an additional 20-30 minutes.

In conclusion, the Quantum Lion Epic Burger 2nd gen is presented here. Shout-out to CHeF KUBiAc for hosting and letting us destroy his kitchen and living room in the last 3 days!! 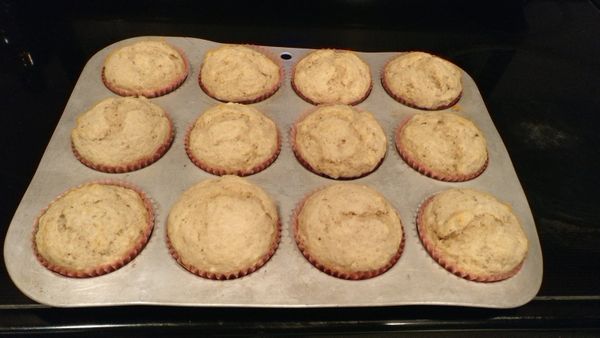 I fell off the face of Quantum Lion for a bit due to life happenings like job changes and moving across the country, but I'm back with new posts coming 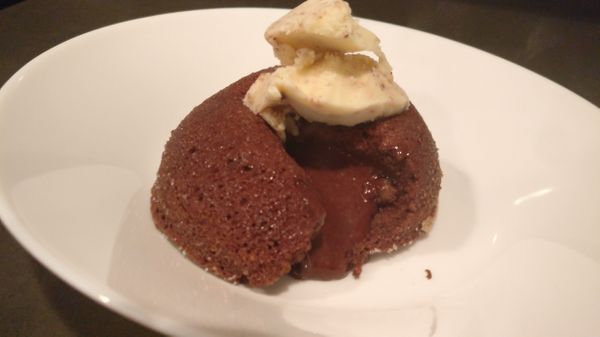 There are few things better than the combination of melty cake and ice cream. The craving suddenly hit me. Ingredients 1 egg 1/8 tsp salt 1 tbsp sugar + excess