Nothing goes according to plan this week as I make a ground beef recipe. Inspired by a surprise meat grinder which showed up at my doorstep earlier last week, I promptly searched the internet for recipes, ultimately settling on a Goulash for Americans dish (I will note that adding "for Americans" after a noun causes the phrase to be very condescending. I couldn't help but feel insulted when looking at the cover of my highschool textbook Latin for Americans). Having recently eaten some tasty beef goulash dishes in Budapest, I was very ready to start cooking my own goulash.

I bought 3.5 lb of bottom round and 3.5 lb of top round beef. After trimming off most of the fat, I cut the beef into geometric shapes which somewhat resembled (1in x 1in x 1in) cubes. 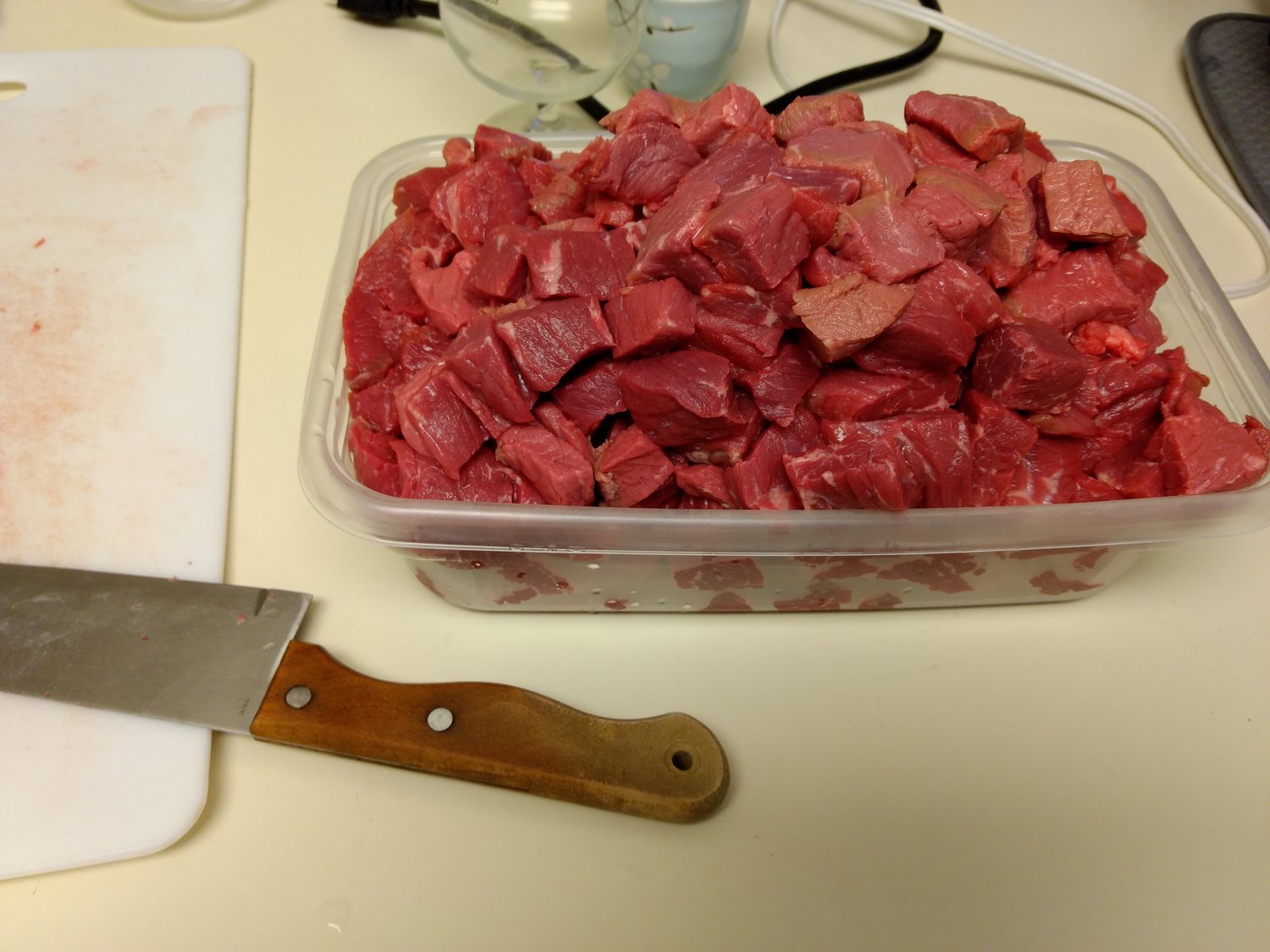 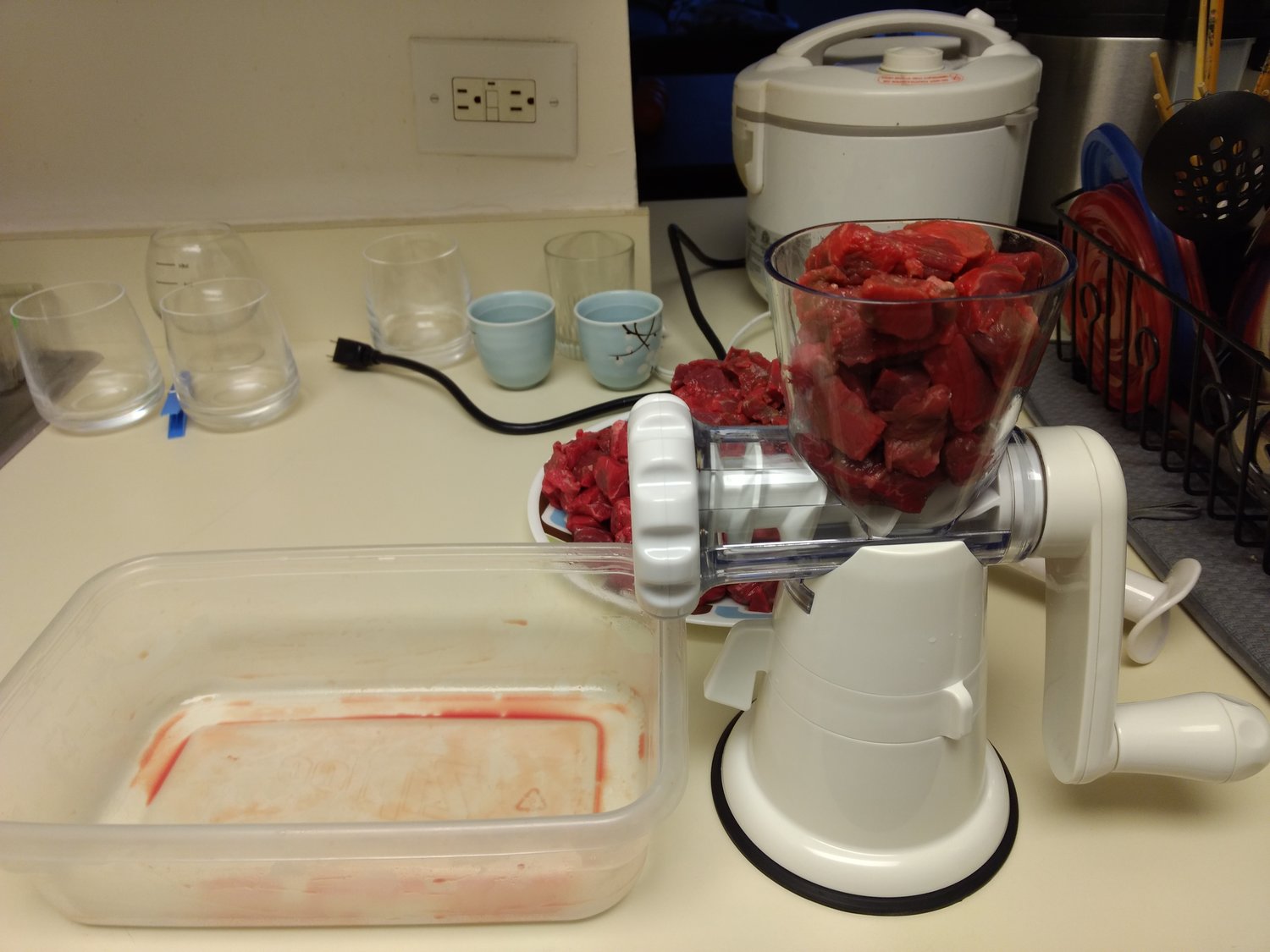 The quality of this ground beef is amazing. I don't think I've ever seen ground beef which looks this fresh. Note that I used the large die for this job. 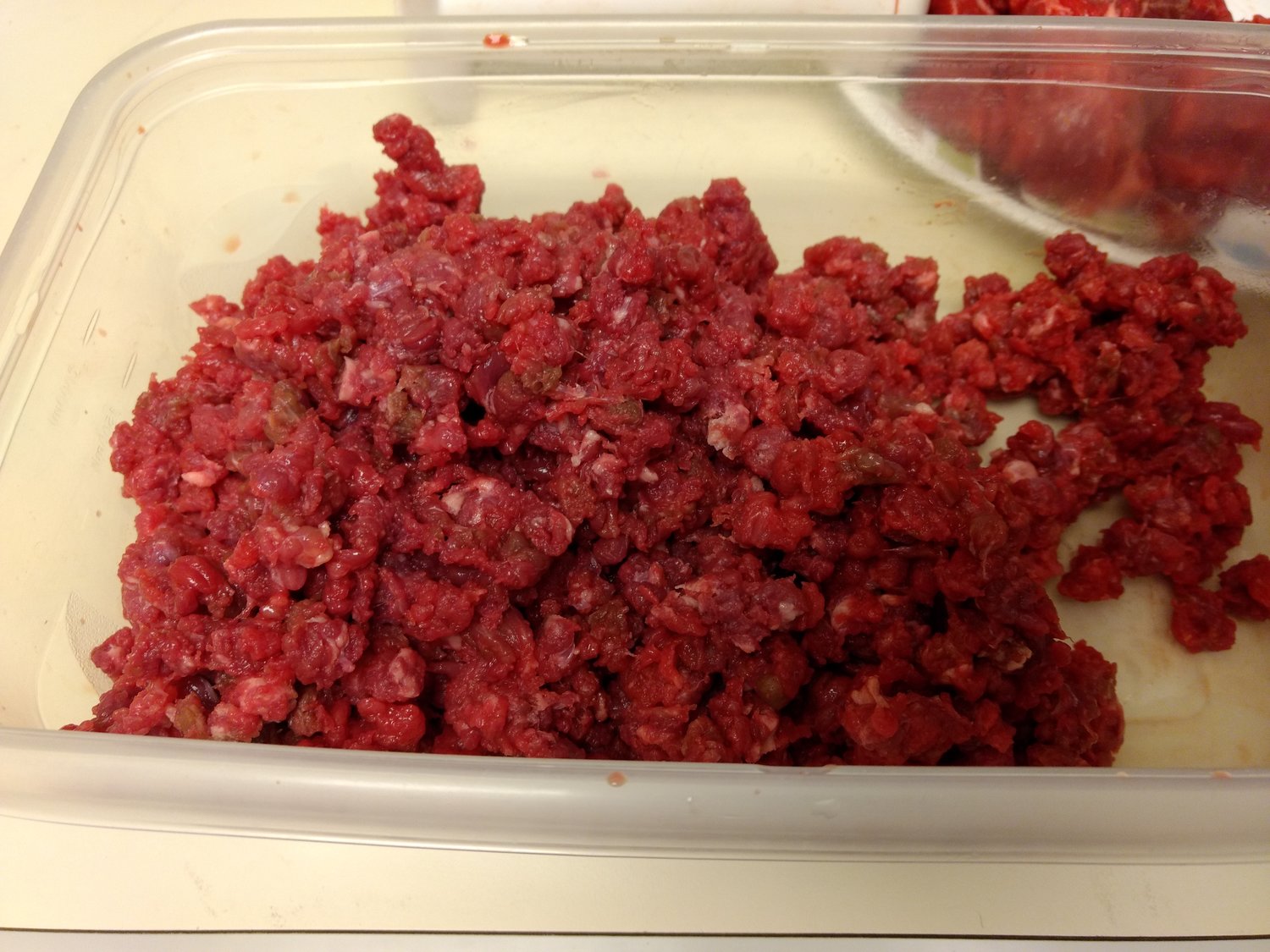 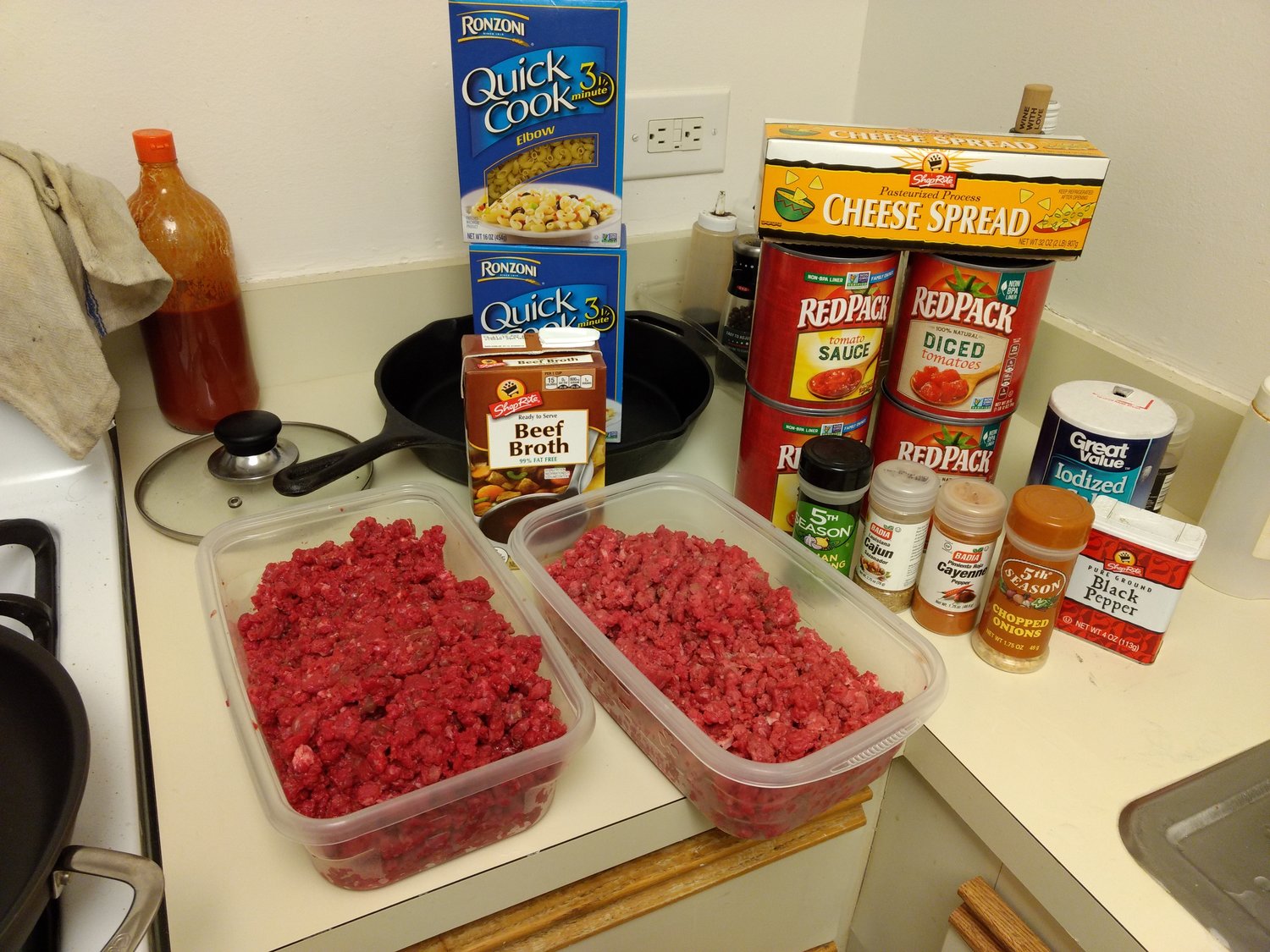 The meat was first browned in a Quantanium coated pan. 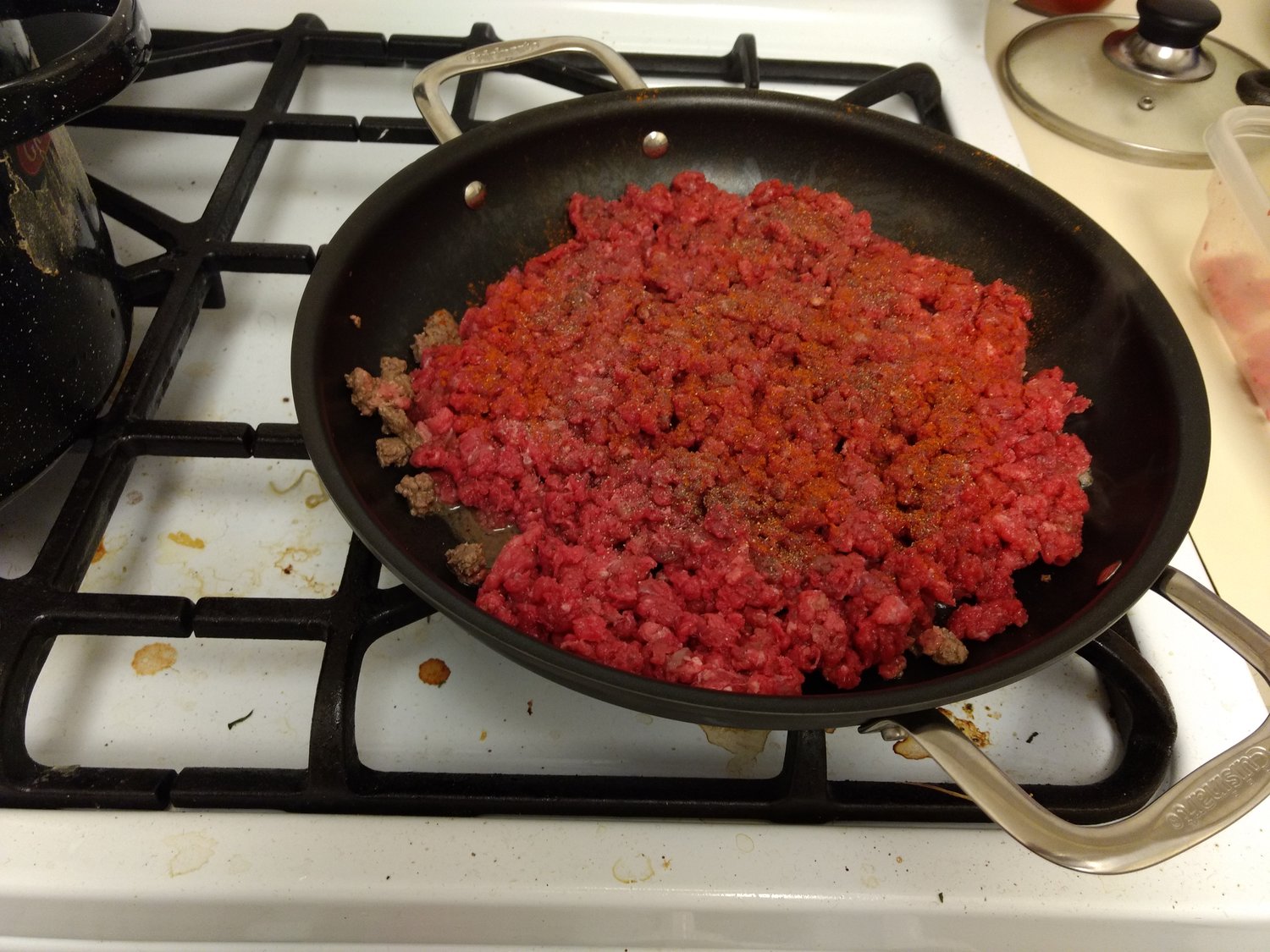 Then, everything except the noodles and cheese were added to a stock pot. The spices were not properly measured out; they were just added arbitrarily to the pot. 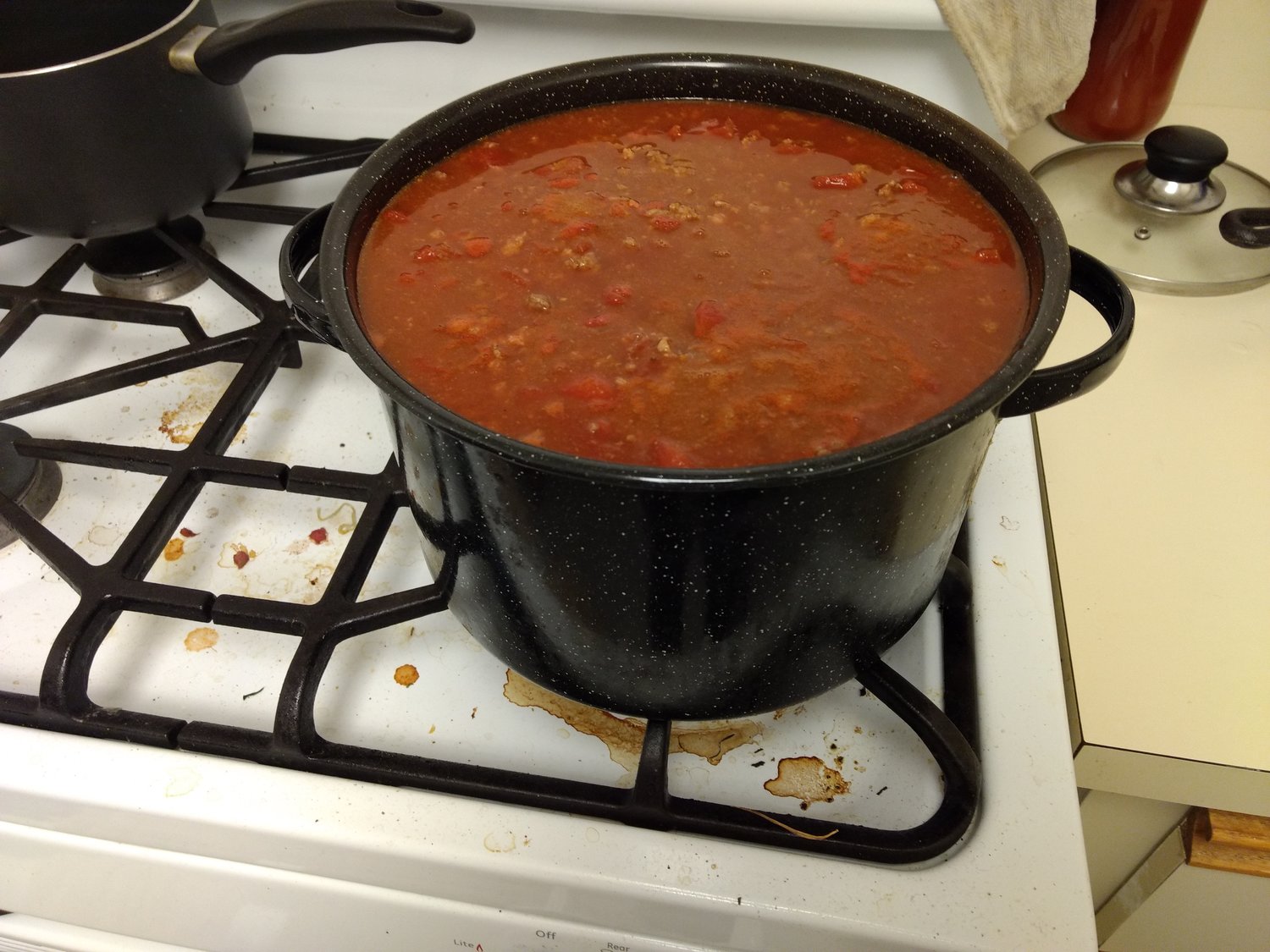 Error: the stock pot is out of capacity.

Notice that the stock pot is almost completely full. Furthermore, there was too much liquid in the pot. Since I actually wanted this to reduce to a more viscous consistency at some point before the day ended, I had to remove some of the liquid. Unfortunately, this also removed a lot of the spices which had mixed with that portion of the liquids. I recommend only using 1 can each of tomato sauce and diced tomaroes.

As the soup was reducing at home, I went to The Cheesecake Factory for the first time ever and ordered a 2400-calorie pasta. I finshed 90% of it. The chain was better than I expected, although I came in with pretty low expectations. 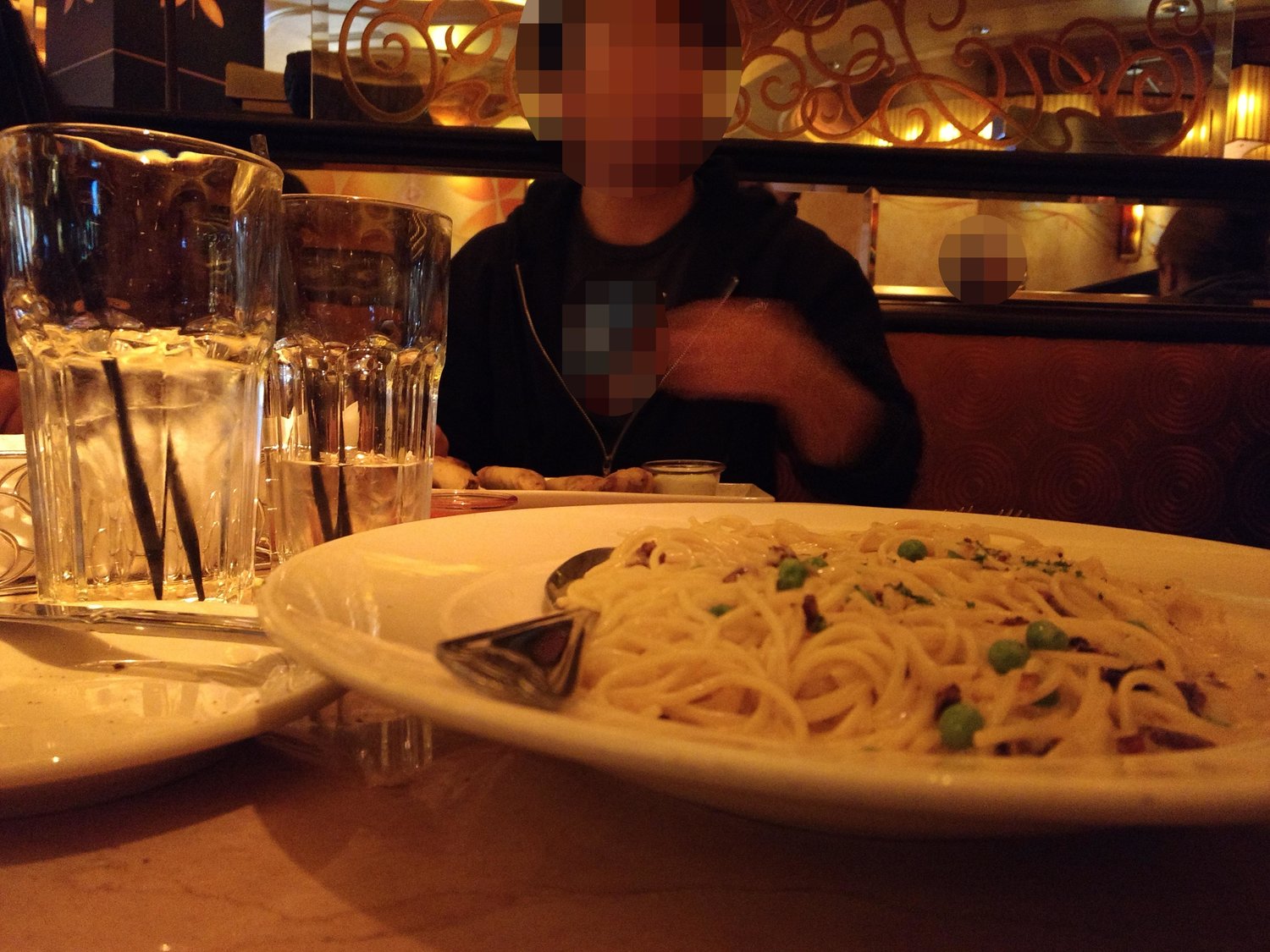 However, after returning home, I felt like even the sight of pasta made me feel a bit uncomfortable. I promptly put away the two boxes of elbow noodles and started to cook 3 cups of brown rice.

An experiment with cheese

After the soup was reduced, the dish was partitioned into two. 1/2 cup of cheese spread product was added to one partition and melted. 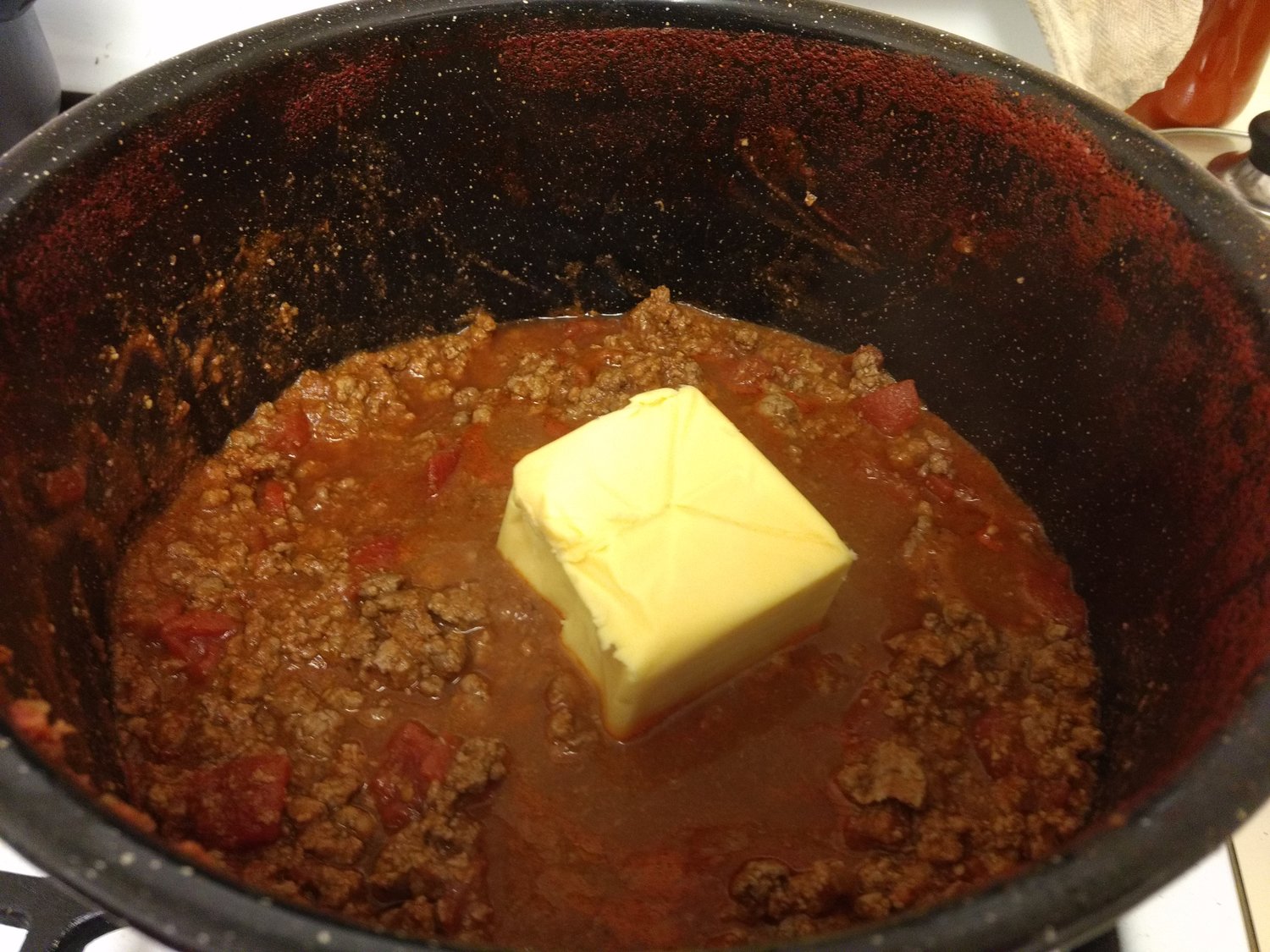 The result is two different-looking dishes with different consistencies. 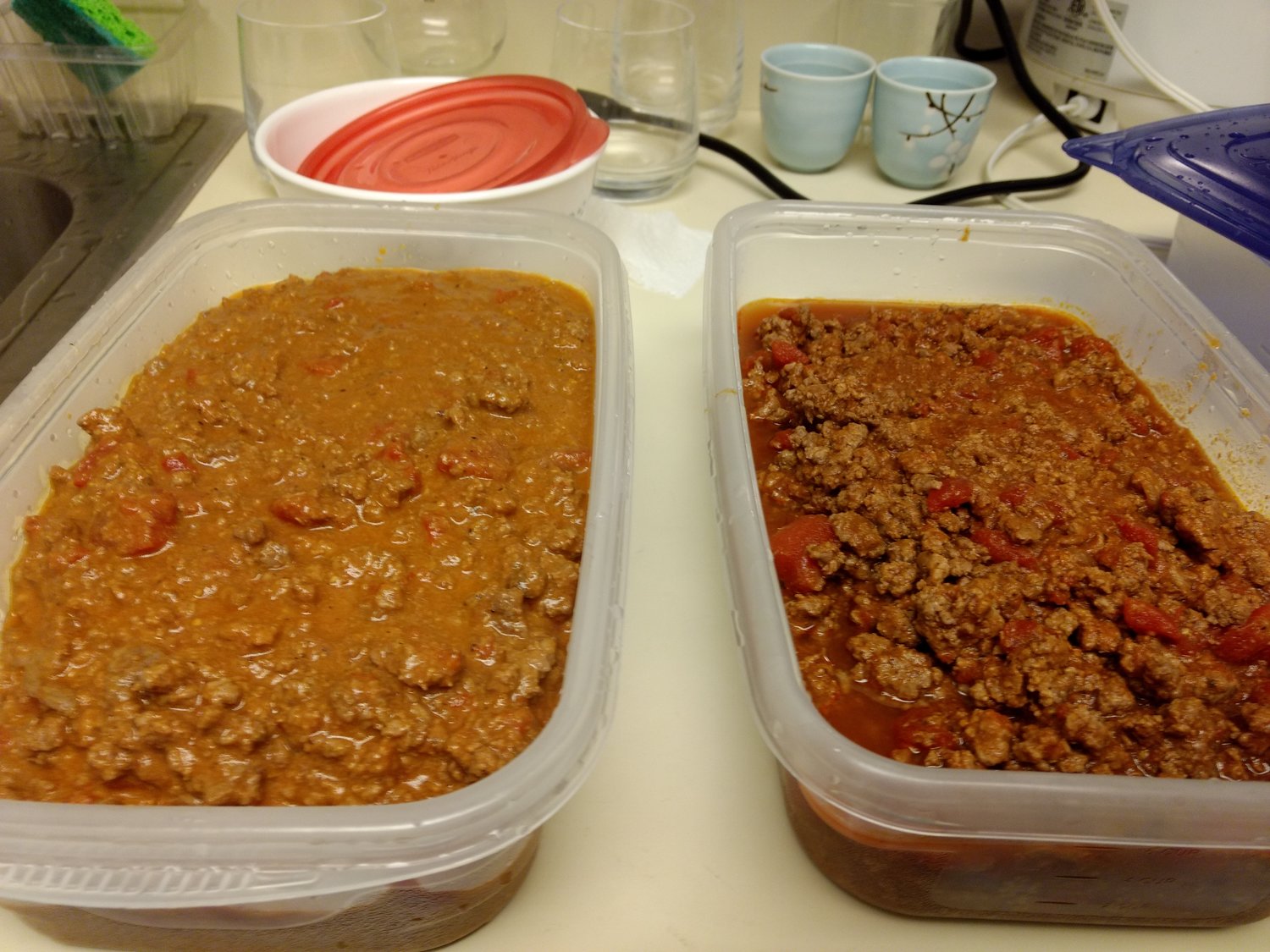 I packed this with brown rice to bring to work for my lunch and dinner. 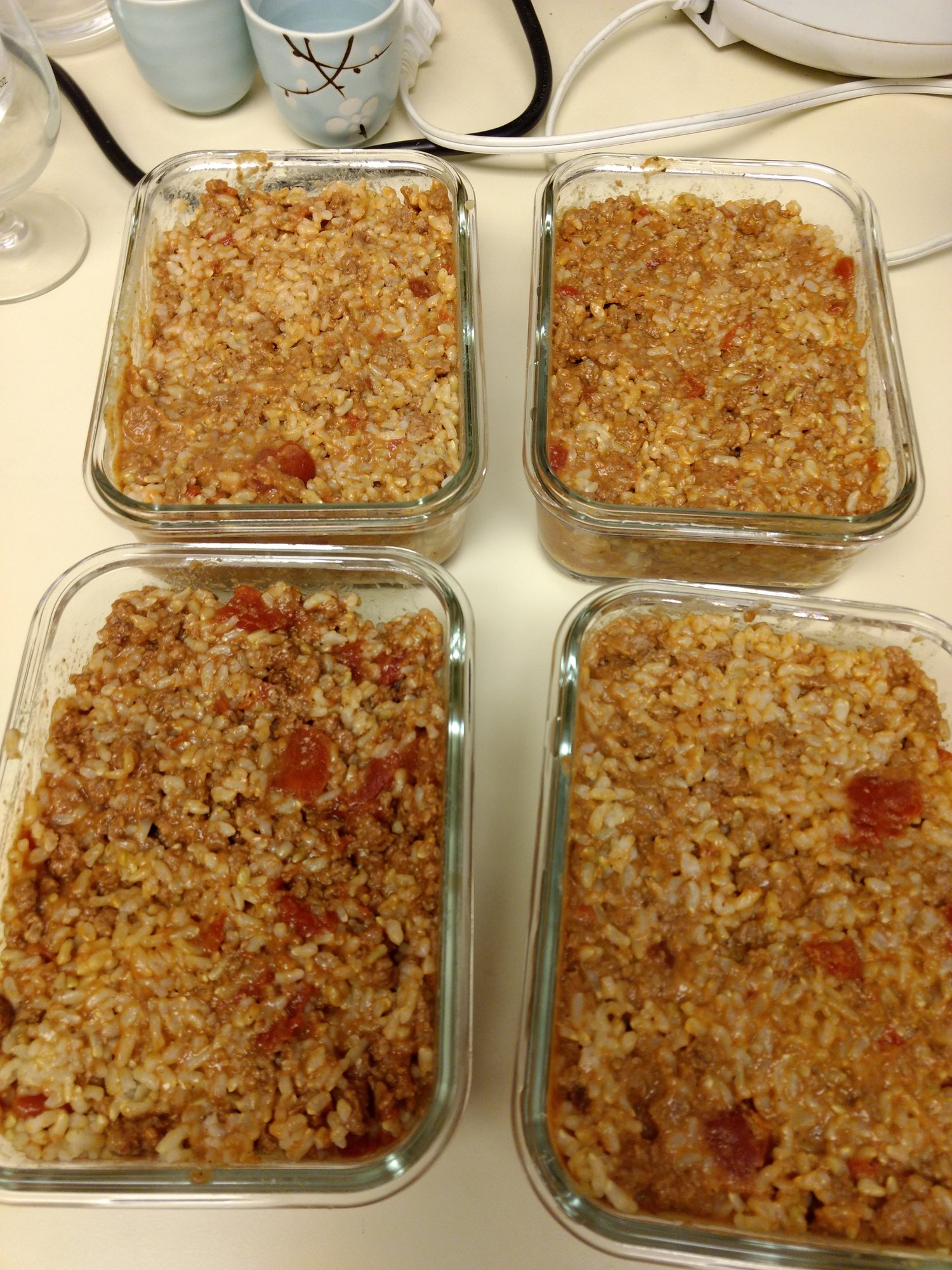 But it's pretty good.

I liked the cheese sauce version more. Both the flavor and the viscosity were an improvement over the non-cheese version. The dish worked surprisingly well with brown rice instead of noodles. Given how tasty it is, I'll call this dish a success, even though I don't quite know what it is. 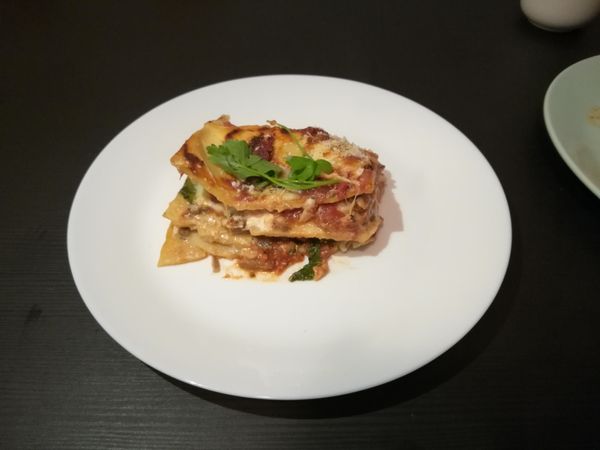 As part of a Quantum Lion challenge, we (aeghrur, RZ, and I) make a vegetable-based lasagna. With the absense of meat, we chose to focus on the strong flavors of 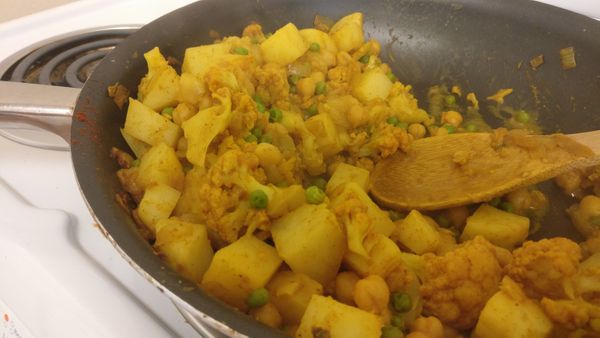 I'm sure my fellow posters can share the love for Taste of India that I have. It was one of my favorite places to eat on on campus because I