Background:
Anyone who knows me, (future) Dr. Bulldog, knows about my love affair with pasta. When I was young, once a week I would run home from school knowing a plate of spaghetti would await me. Pasta nights at Milton were always the best. Since I had started cooking for myself in college regularly, over 50% of my weekly diet has consisted of pasta. The top of my bucket list is to find the perfect recipe for fettucine alfredo (which I did, with my dear friends Jimmy and CHeF KUBiAc the last time I saw them).

During college, in spite of much intervention from said acquaintances, I took on a dark path that is otherwise known as obsession with Chef Boyardee’s Spaghetti and Meatballs. At one point, I was eating 6 cans of them every day. (250cal per serving * 2 servings per can * 6 cans ... you get the idea)

This past Christmas, CHeF KUBiAc got me a pasta maker (a Marcato Atlas 150 <3 <3 <3) as a last ditch effort to get rid of my addiction.

Finally, while waiting for my reaction to run in the lab, this holy instrument was used this President’s Day long weekend in a 2-part series, the first being my first attempt at making fettucine from scratch.

5 cups of all-purpose flour were sifted into a large bowl for mixing. A hole was dug in the middle of the flour, and water and eggs were added. The instructions called to blend the mixture using a fork; this was proven difficult after the initial mixing, so I switched to mixing by hand. After kneading the dough in the bowl for a couple of minutes, I added a small amount of water to the dry dough, and continued to knead the dough on a floured surface for a further 5 minutes. At this point I decided practice my carving skills on my beautiful dough. I then cut that bad boy into smaller pieces and fed them into the pasta maker. It has 10 thickness settings (0 – 9) and the recommended thickness for fettucine is 5. I fed the small pieces into the pasta machine at the 0 setting several times, flouring both sides and folding the sheets half in between. This was to make the pasta sheets really even, and to prevent the sheets from sticking to the grinder. I then fed through the evenly-thick pasta sheets at settings 1 through 5. Look at how long the pasta sheet got! After the last thinning process, the sheets were cut into ~10 inches long pieces. The pieces were cut into the appropriate width of fettucine. I have always wanted to do this: The fettucine was put in boiling water that was heavily salted – more-than-normal amount of salt was used since the pasta dough was not seasoned. It is recommended to cook freshly made pasta for 2-4 minutes; I ended up doing 7 minutes. The fettucine was just the right amount of firmness.

Results
The fettucine was served with turkey meatballs and marinara sauce. Discussion
This freshly home-made fettucine tasted different. Good different. Comparing to commercial pasta, this production tasted … fresh. The pasta felt elastic in my mouth; it was just the right firmness, and I was not even trying to achieve al dente.

I would recommend making the fettucine from a small piece of dough without stopping, instead of trying to do every step in large batches in sequential steps. This would eliminate the need to put the pasta sheets down after every step. If the sheets are stacked on top of each other, after more than 5 minutes they would begin to stick to each other. If extra flour is applied on the top and bottom, the pasta becomes too flour-y. If the sheets are not stacked on top of each other, a large kitchen countertop is needed. A quarter of my dough became too dry as I played around with the conditions because the wait time was too long.

I would also recommend against lightly coating the pasta sheets with flour every time it is fed through the pasta maker. Uncoated pasta sheets were attempted, and they did not stick to the machine.

Until next time! ... The second part of this President's Day long weekend series is coming soon.

Abstract: (Future) Dr. Bulldog revisited a tried-and-true meatball recipe with some spicy(?) modifications. Background: Somehow I met a surprising number of Italians in my college years. Being an Italian cuisine enthusiast, I had been passed on several incredible family recipes. The most prominent one 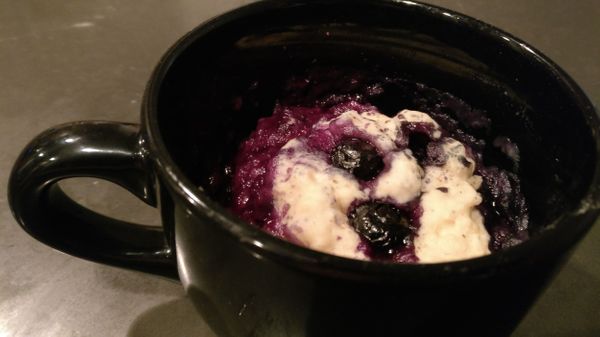 A friend at work has been bringing in blueberry muffins everyday, and a few friends upstairs in my apartment bought and offered me some too...I needed to make some