Cabbage was $0.17/pound this week, so I decided to pick up a head. Usually, I just like to chop it up and stir-fry it with some salt and pepper, but today I decided to pay homage to one of the greatest chefs of our time--Cooking Mama.

This was my most played game on my brother's DS (next to Picross), and I remember one of the recipes was for cabbage rolls. I've never made them IRL, so it was time to give it a go.

I made enough for six cabbage rolls, figuring that I could eat three immediately and save three for another meal later. 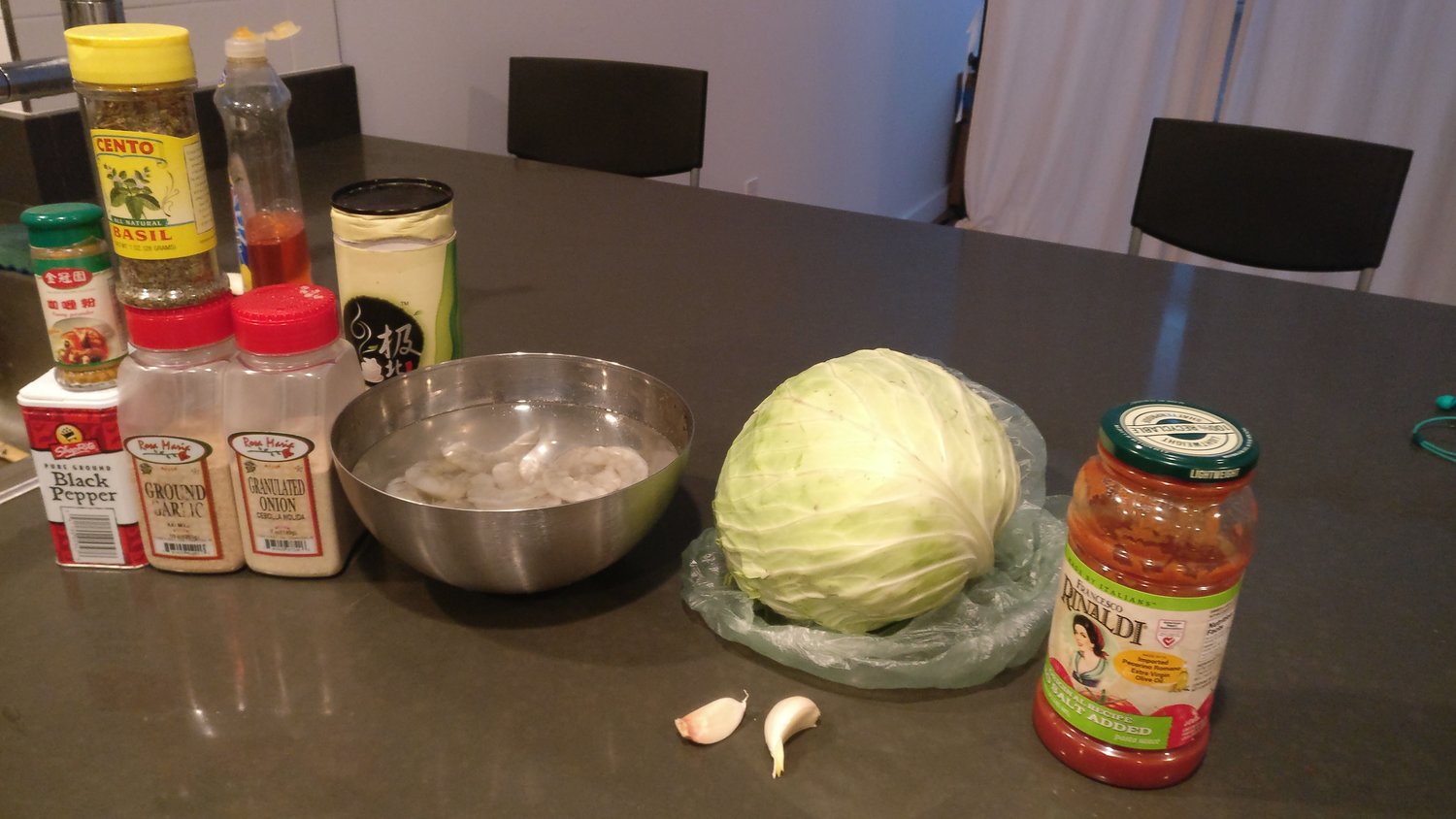 While you heat up a pan and get water boiling on the stove, mince the garlic. Toss it into the oiled pan to infuse the garlic flavor. 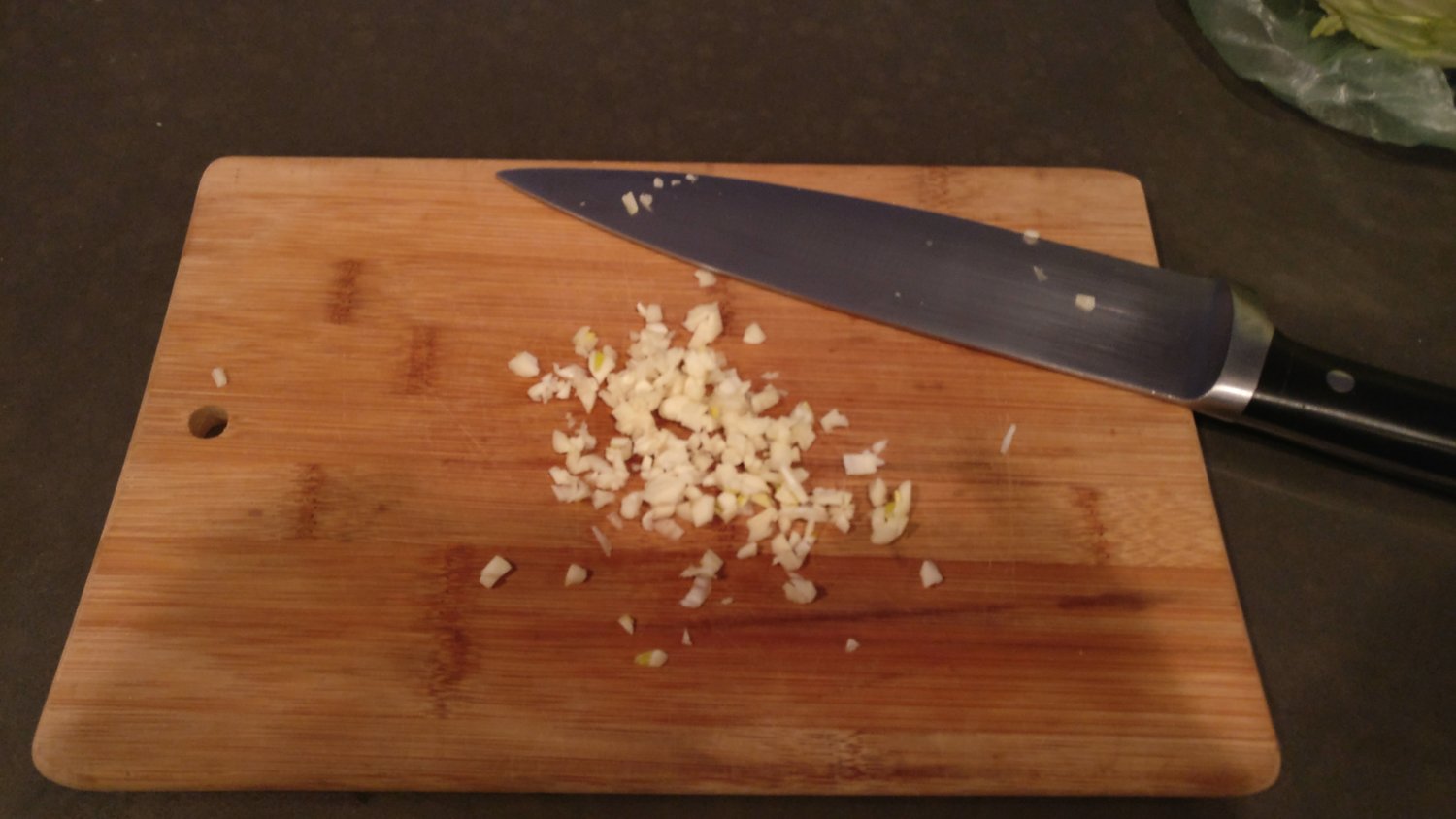 Carefully pull off six cabbage leaves (or however many depending on how many rolls you wish to make), and cut off the hard vein. Don't throw it out though! Chop that into small pieces and add it to the pan to include as part of the filling for the cabbage roll. This is a no waste kitchen. 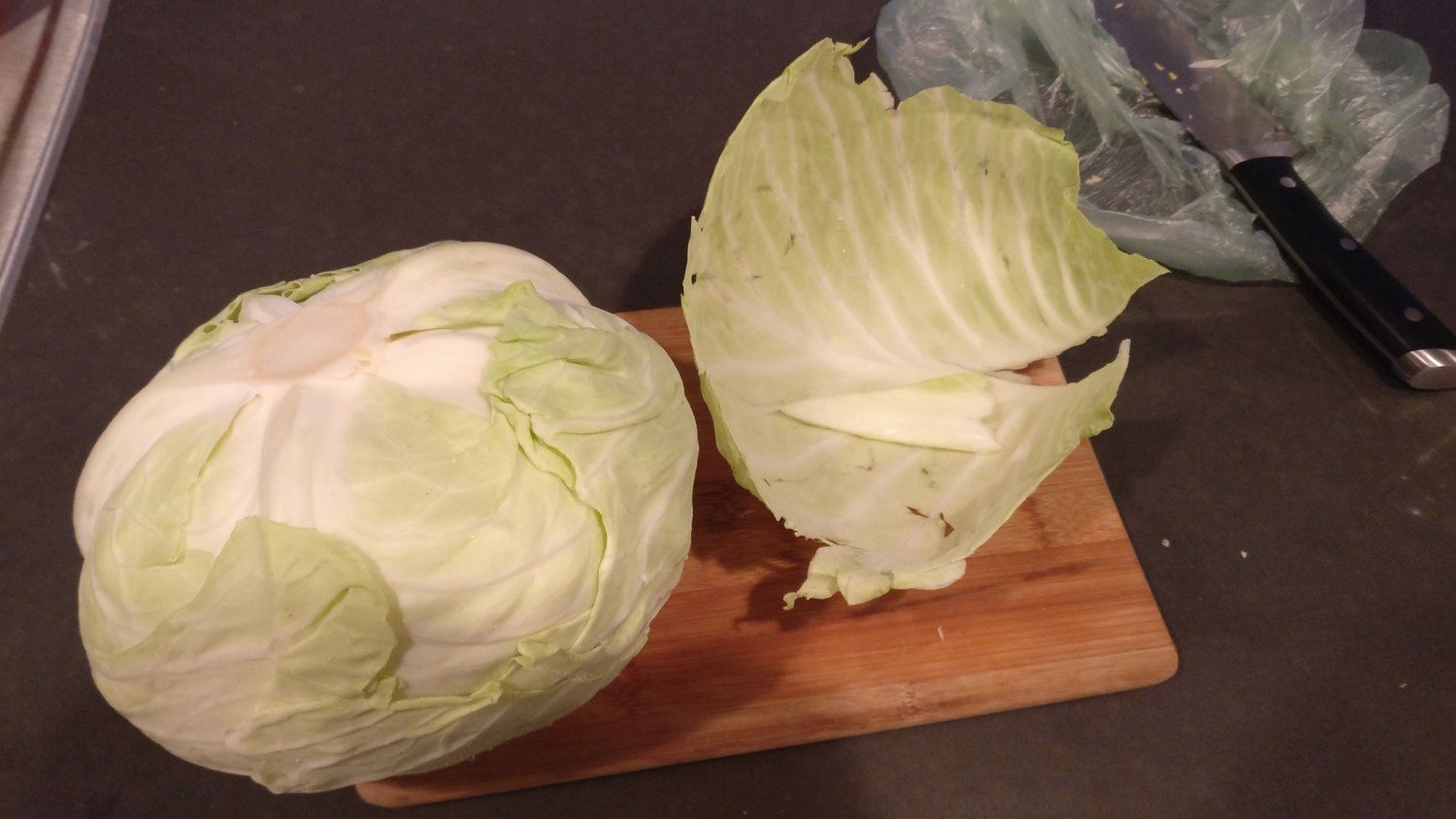 Put the cabbage into the boiling water for a few minutes just to let the leaves become pliable so they don't break when you roll them. 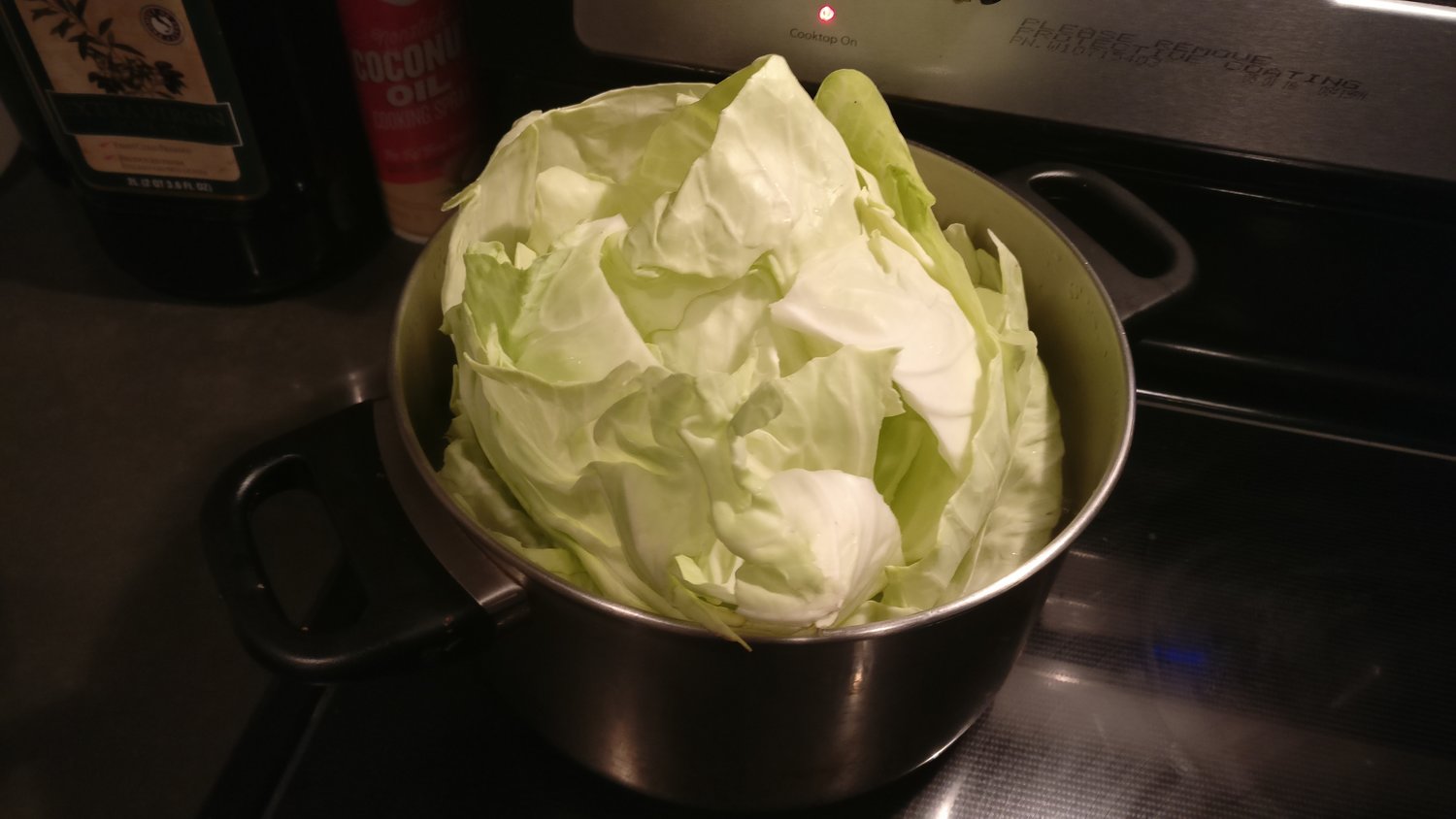 It'll become like this--still fresh and green, but softened. 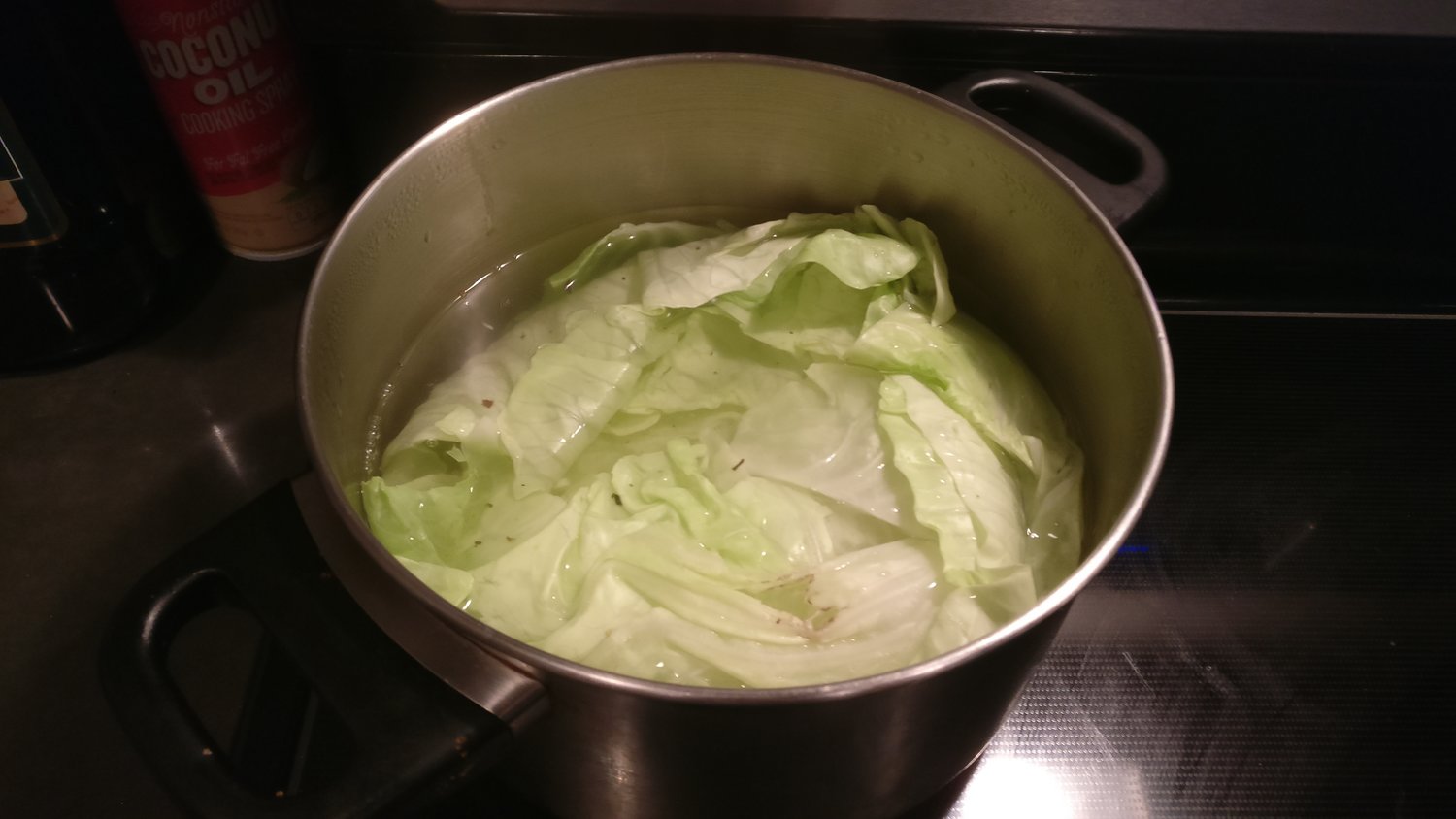 Add the shrimp to the pan along with the seasonings. When I gave it a taste, it seemed like I accidentally added too much salt, but when the whole roll was assembled, it was very good since I didn't season the cabbage with any salt.

Cook the shrimp through. This shouldn't take longer than 5 minutes. 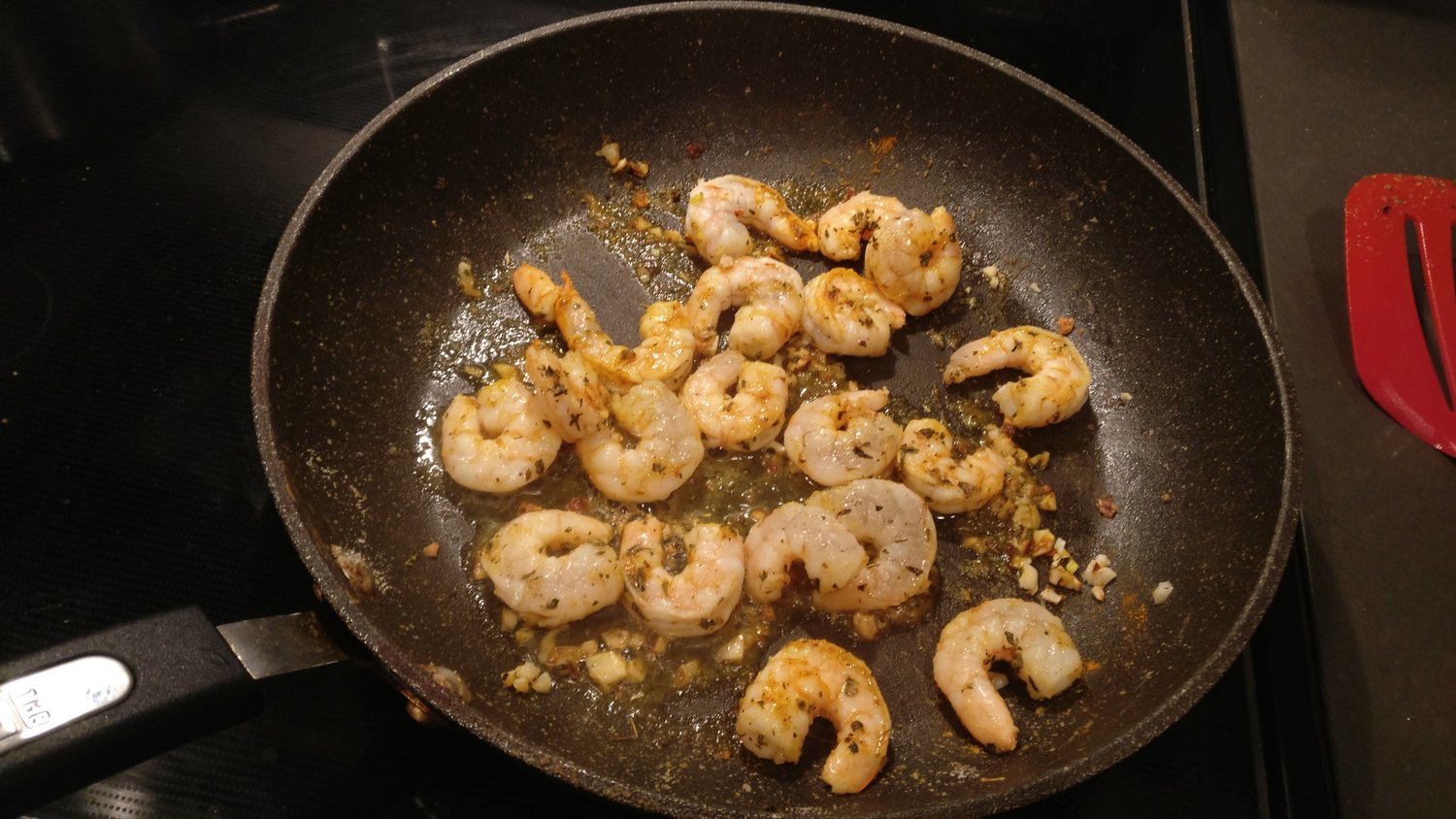 When the shrimp and cabbage leaves are ready, assemble your workstation for rolling. 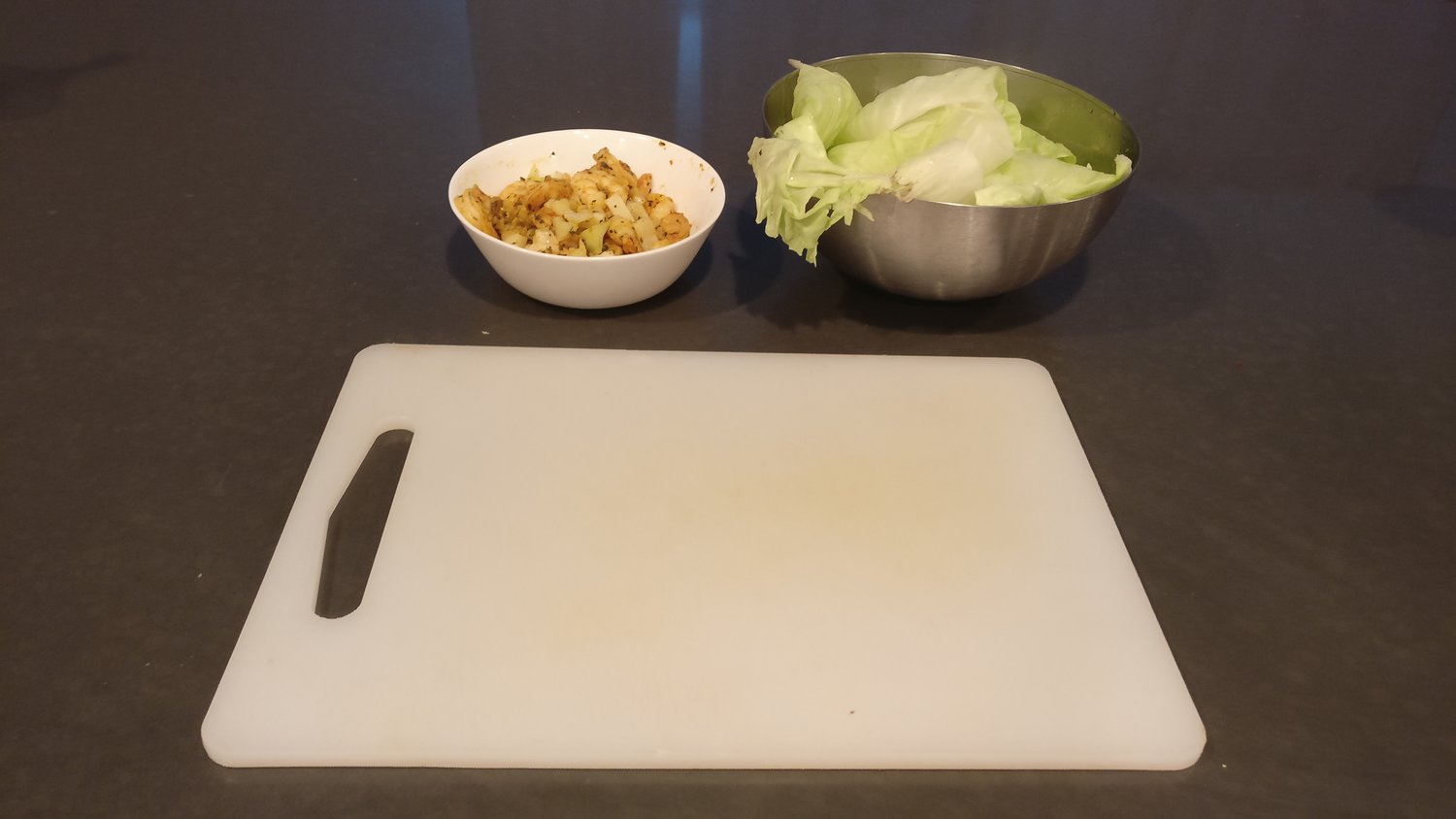 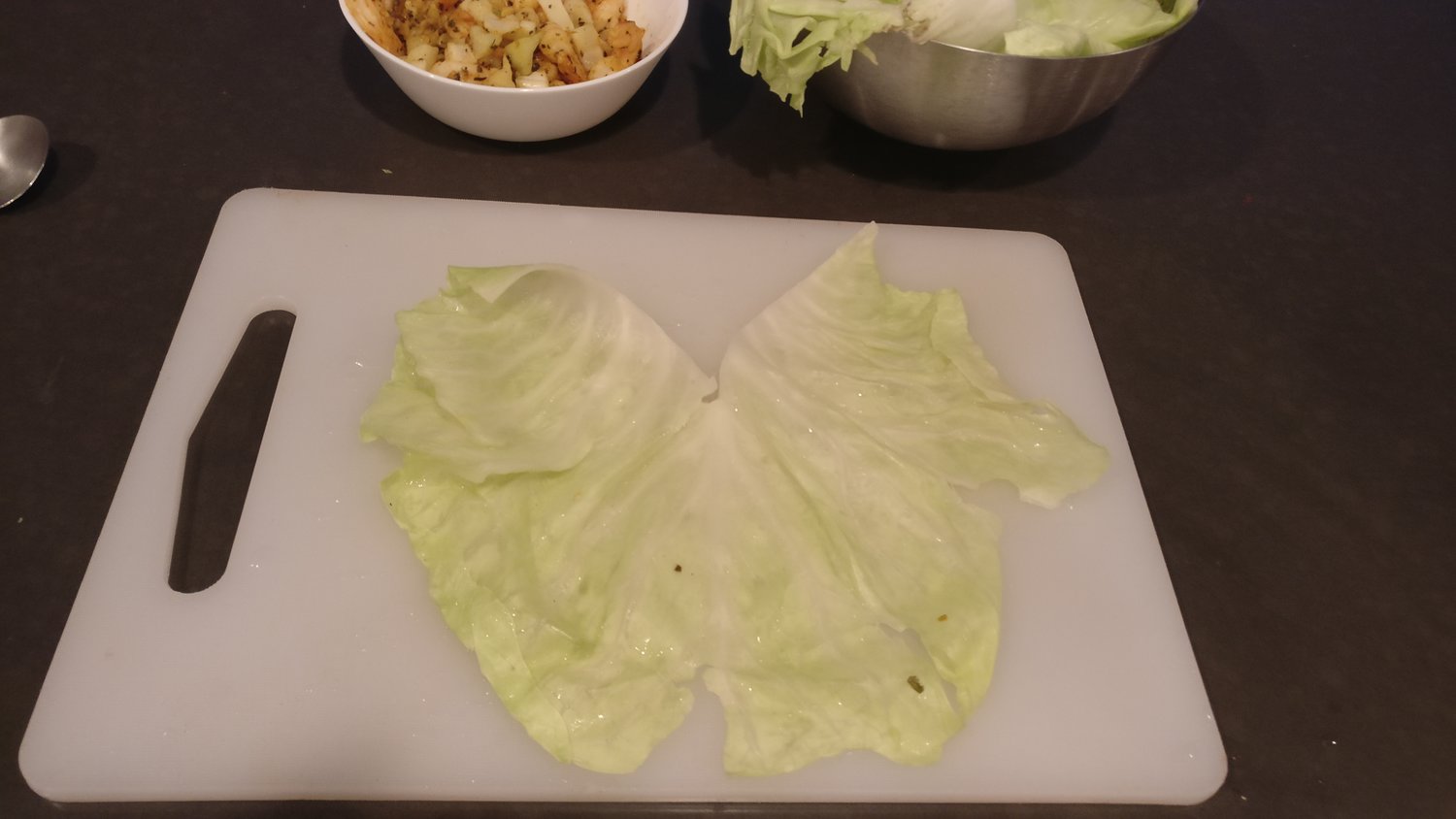 Add filling in a line near the bottom of the leaf. 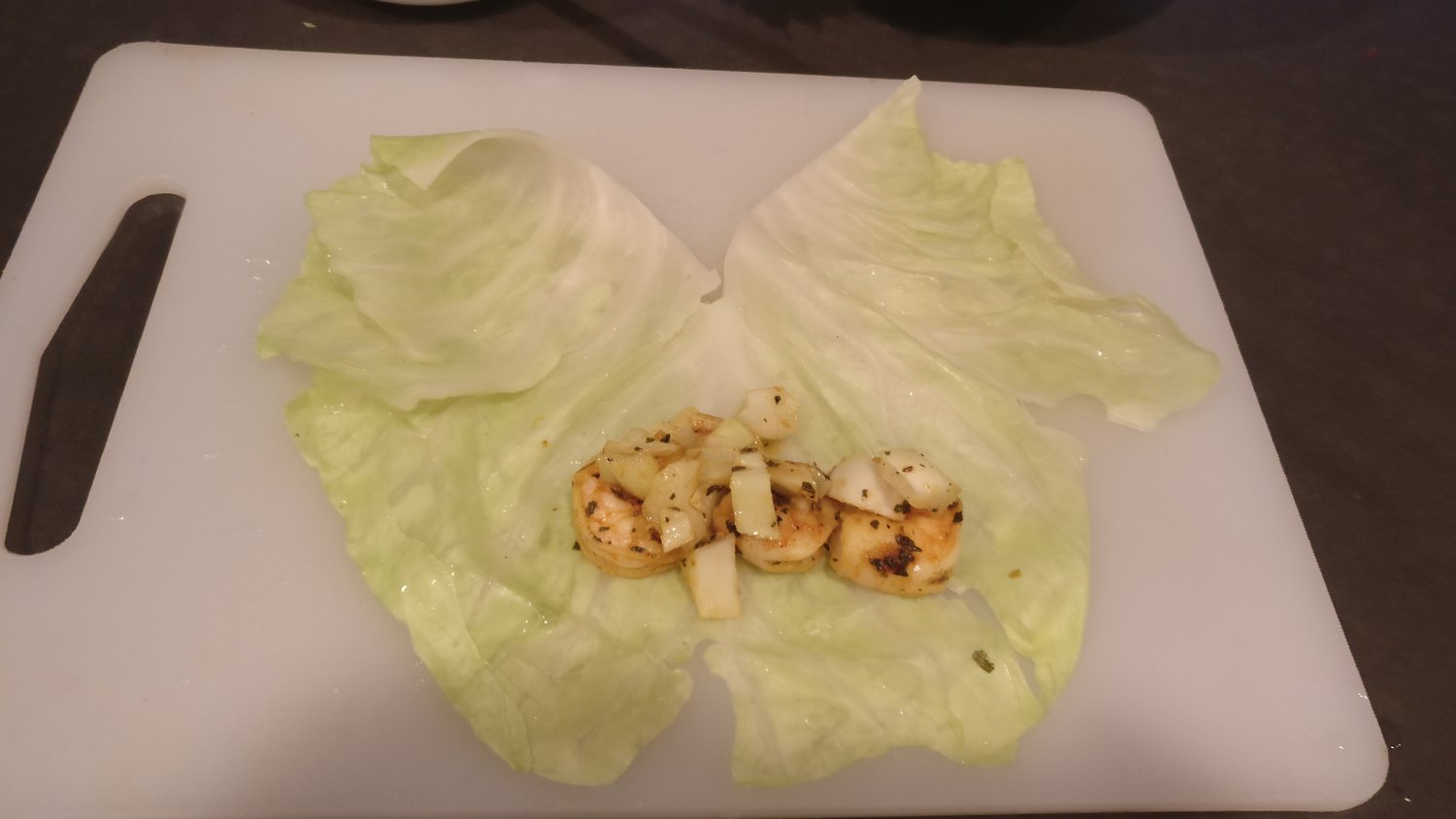 Roll that bad boy up like a burrito by folding the left and right sides in, and then rolling from the bottom to the top. 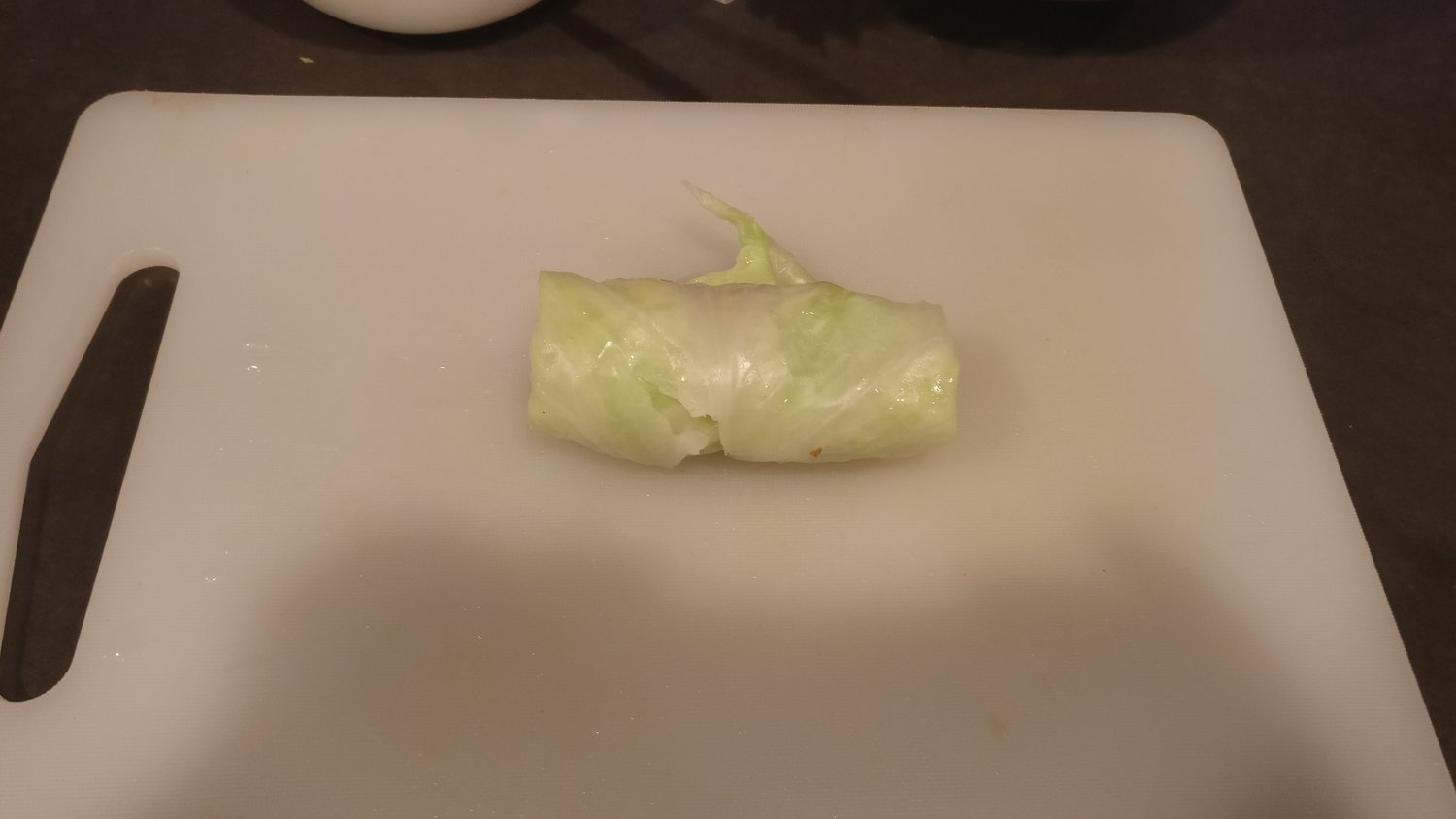 Continue with the rest of the leaves and filling. 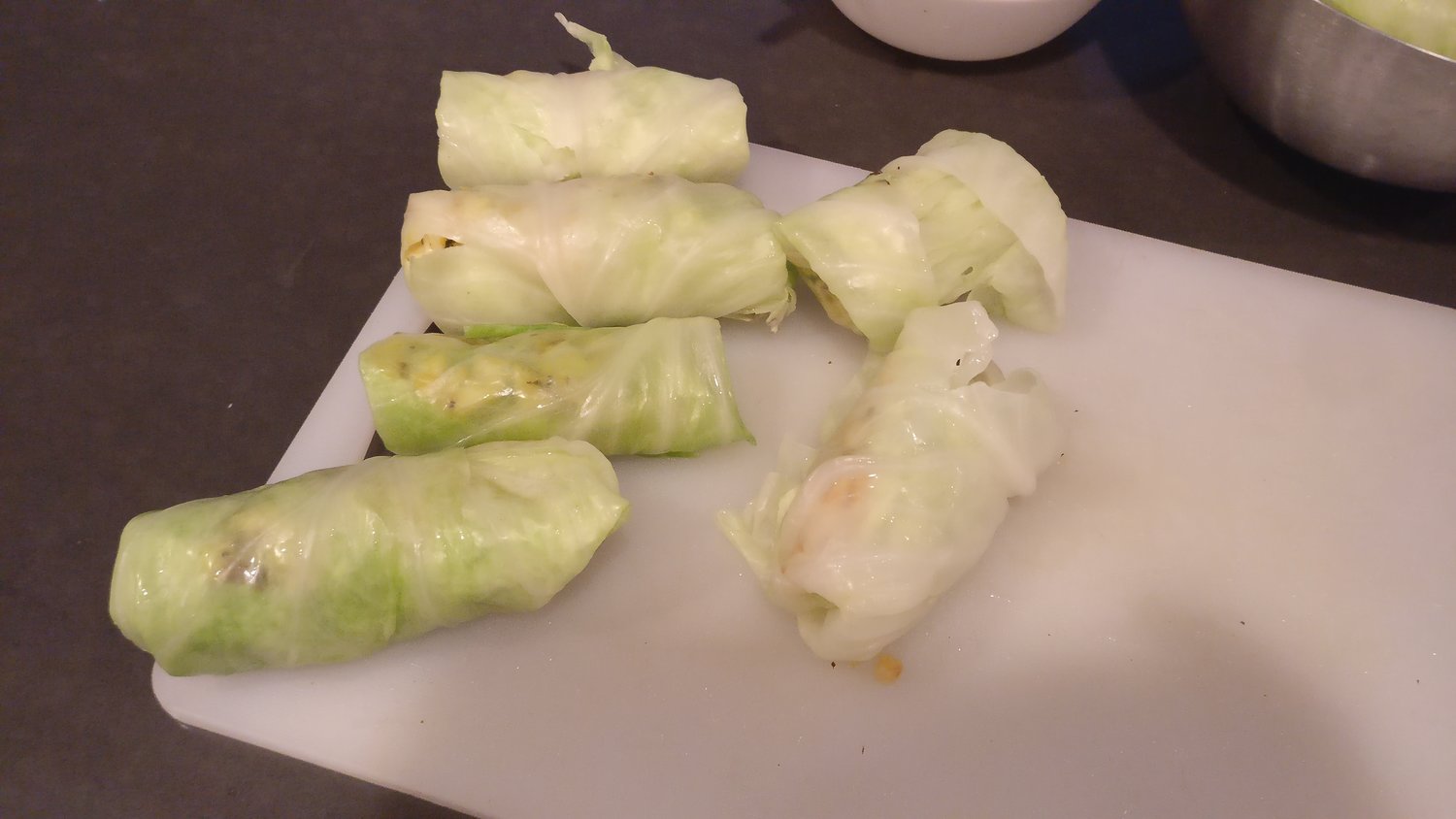 In the pan that you cooked the shrimp in, add some water and tomato sauce, and heat that up. The tomato sauce will add some sweetness and acidity to the dish. 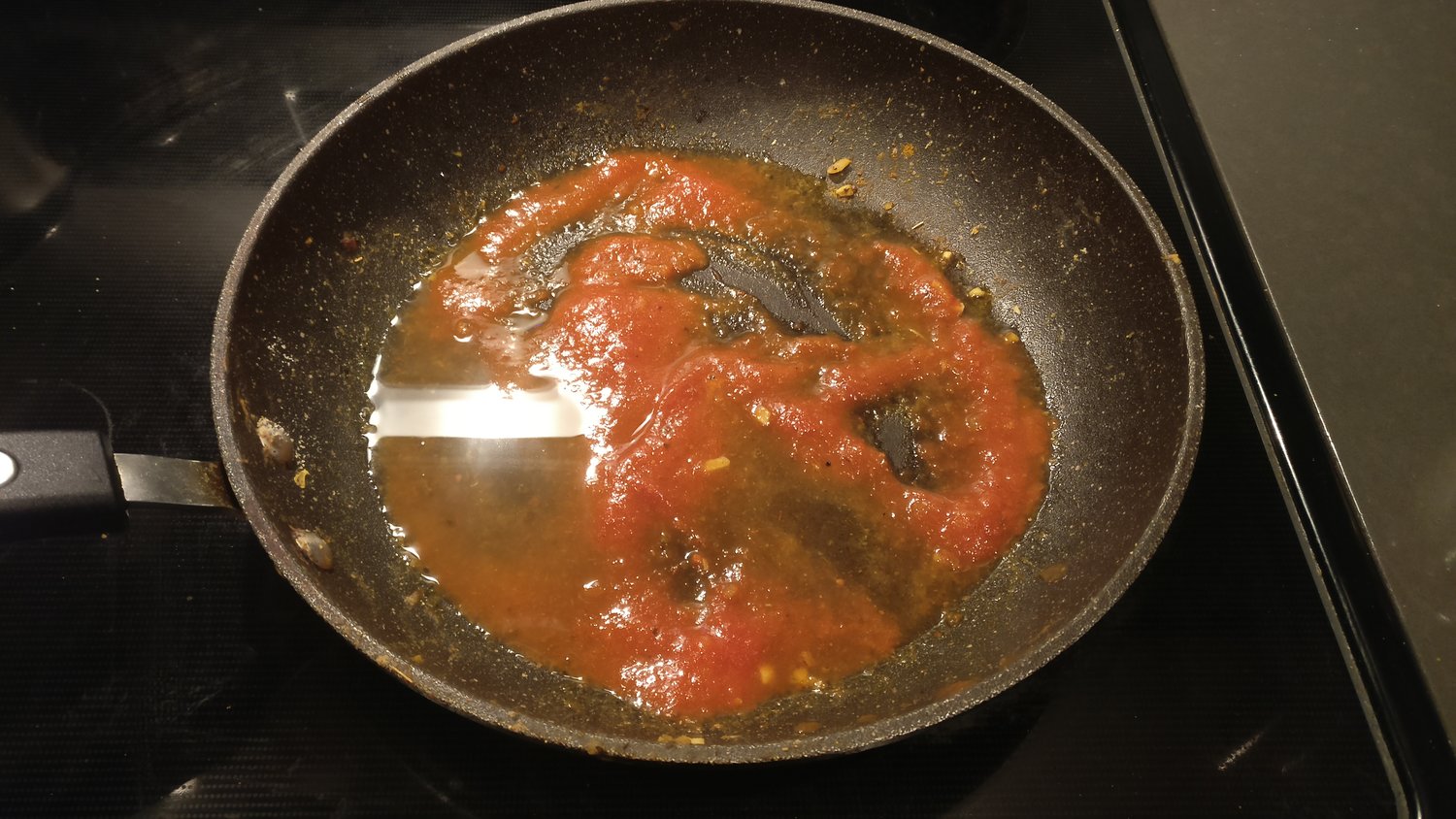 Plop the cabbage rolls in the pan and add a bit of sauce on top of each. 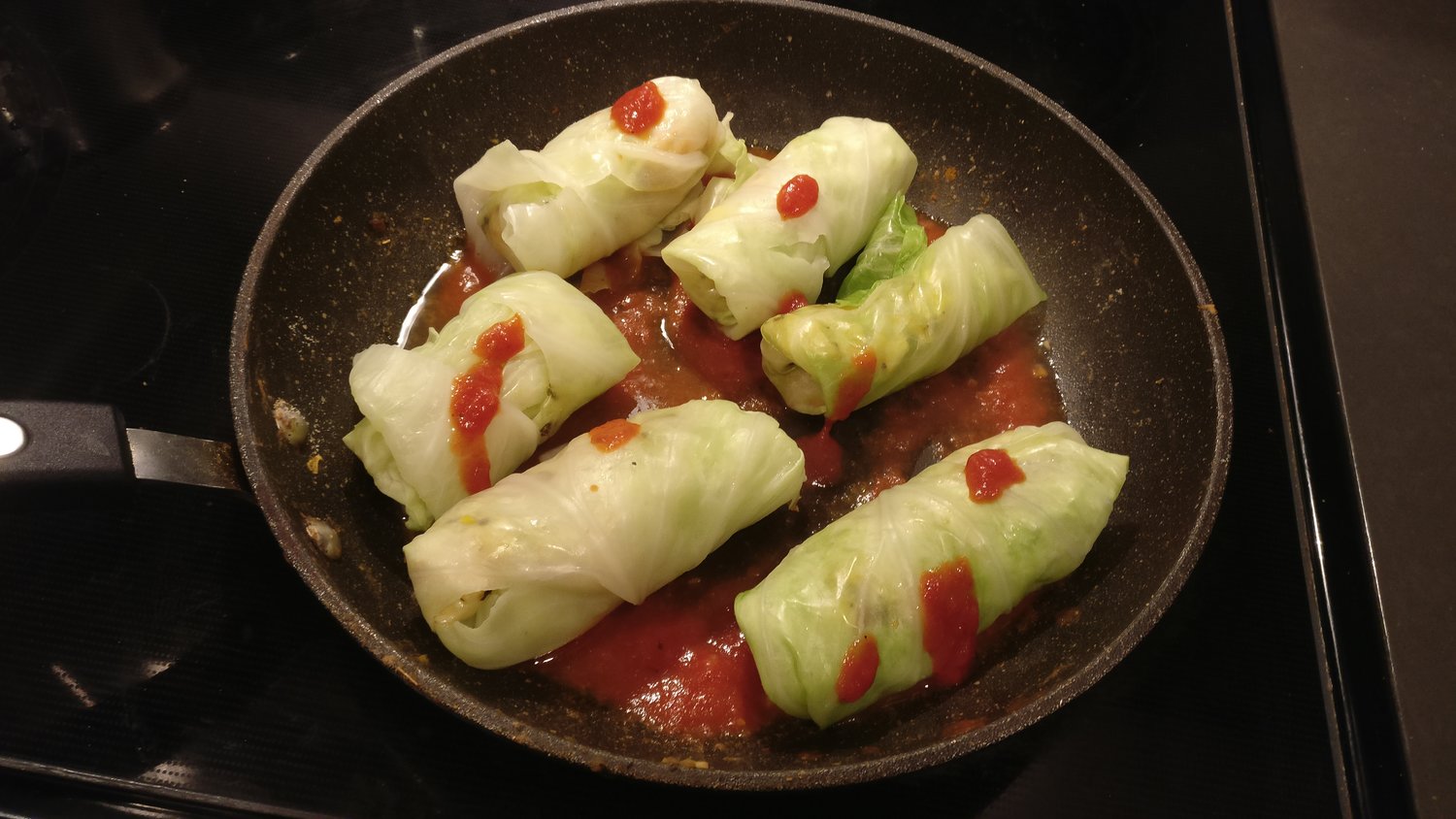 Heat through, and we are done! 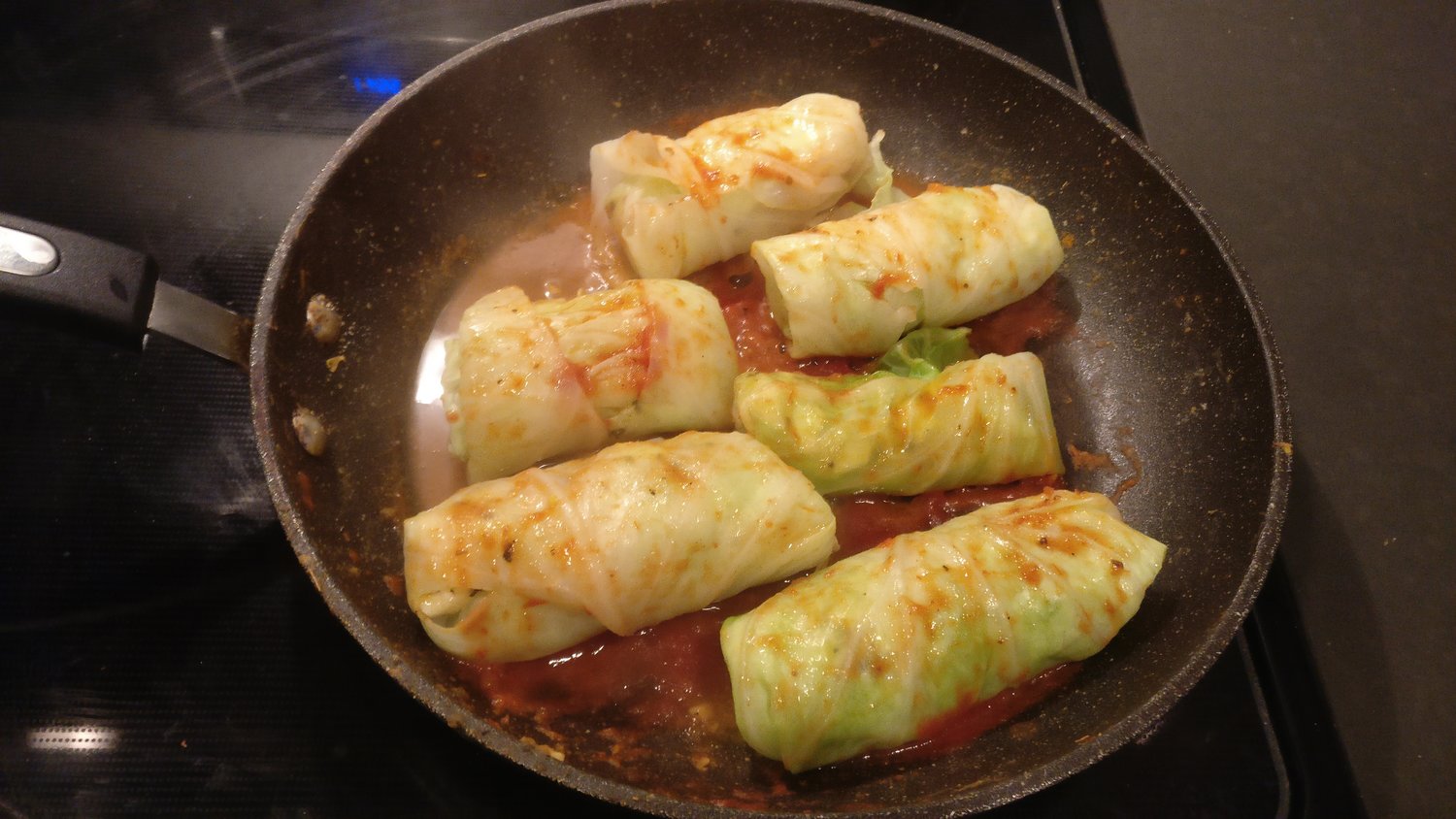 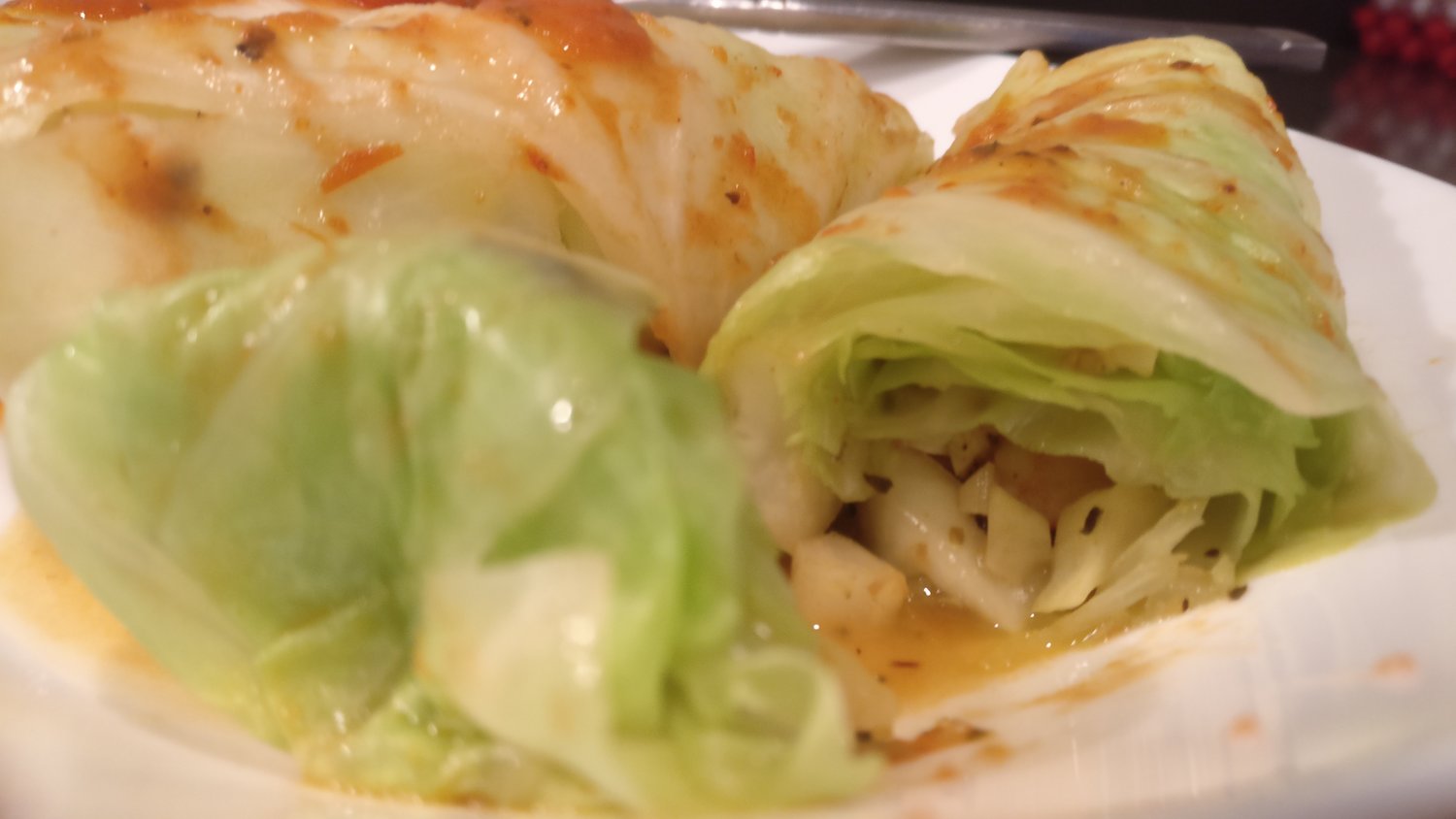 I wish I had more vegetables on hand to add, like carrots or onion or ginger, but this was pretty good! It took about 30 minutes to put everything together and clean while waiting for things to cook, so next time, I might make a larger quantity of the rolls. I'd be curious to see how well they freeze.

I went crazy on seasoning the shrimp, and I would definitely suggest you do the same unless you plan to also season the cabbage.

Overall, yum. Would make again if cabbage went on sale again and if I were feeling in the mood for something fancier than a simple stir-fry. 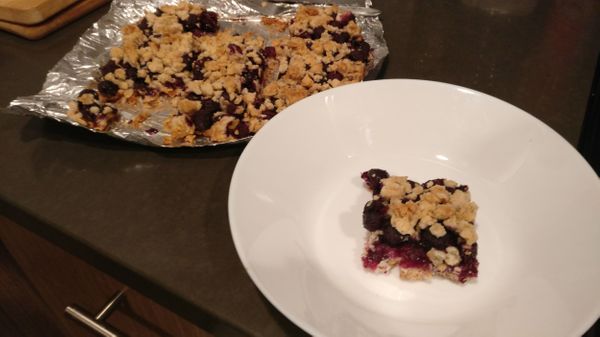 We're back with another blueberry dessert. I'm a big believer in retrying foods that you might not have liked the last time you had it every once in a while, 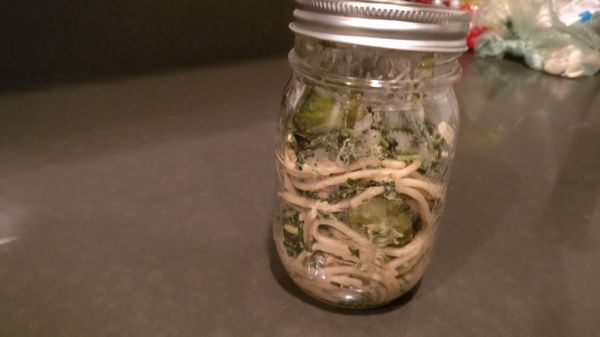 Everyone I share this recipe with always reacts the same way with a "What?!! Is that even good?" If you're a fan of cold sesame noodles, it's basically