As part of a Quantum Lion challenge, we (aeghrur, RZ, and I) make a vegetable-based lasagna. With the absense of meat, we chose to focus on the strong flavors of mushroom and eggplant.

The flour was formed into a well on a chopping board. The eggs were cracked and mixed inside this well. 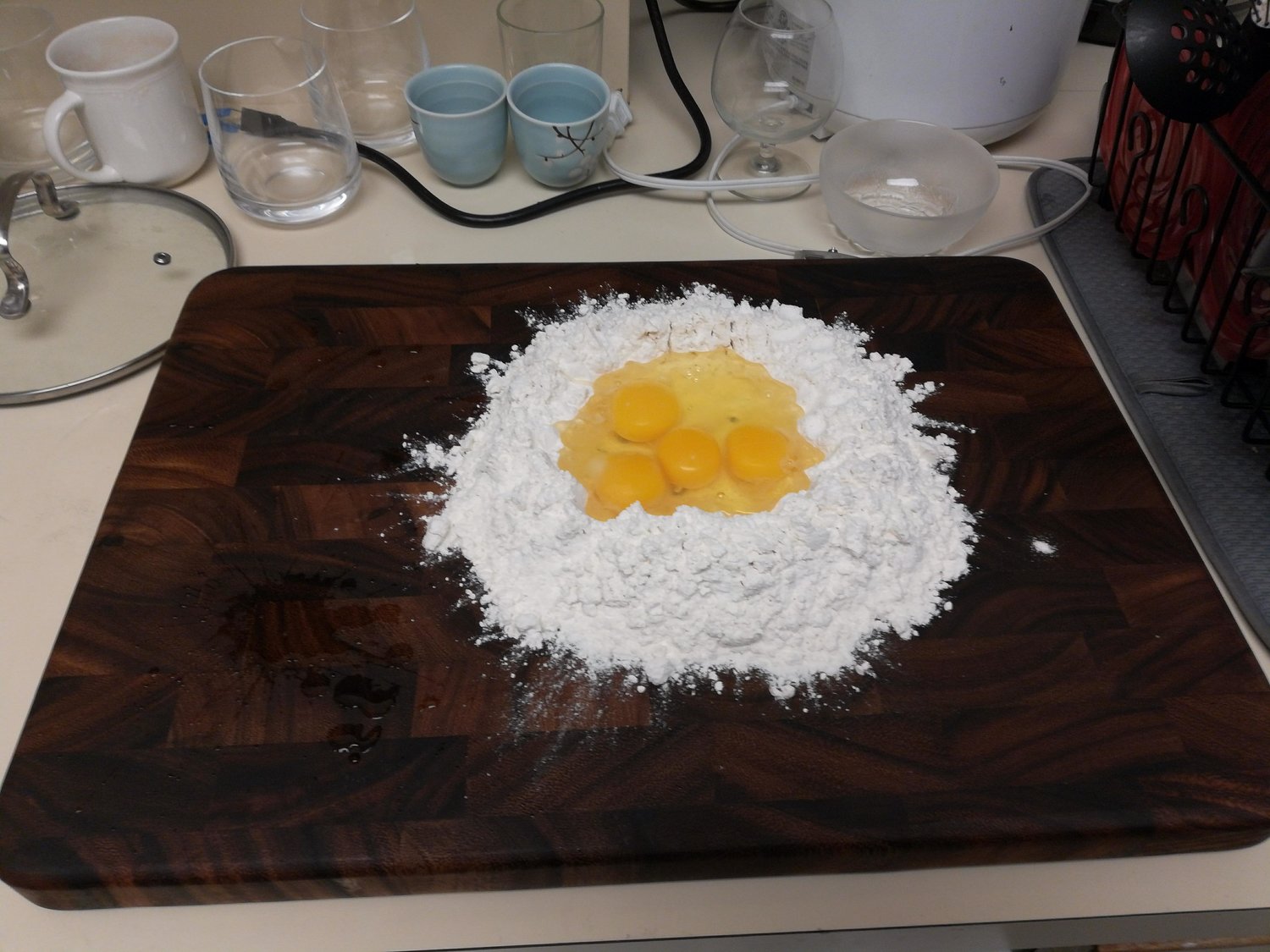 The flour will slowly become incorporated into the egg mixture. Continue mixing until the structure is somewhat malleable and holds its shape. At this point, fold the flour inside and start kneading. 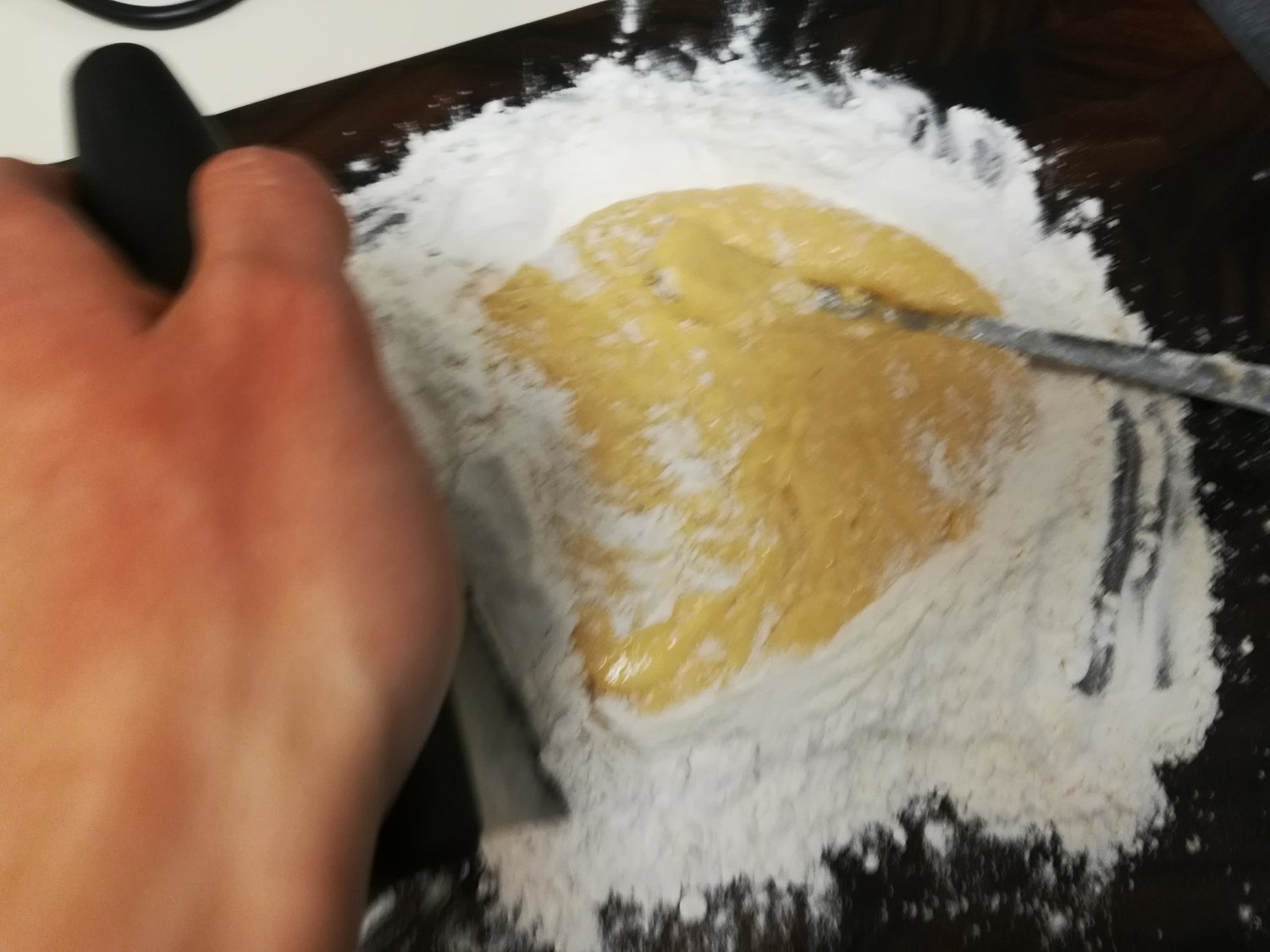 The dough was split into 6 small balls and wraped immediately with plastic wrap. It was then chilled in the fridge for a couple hours. 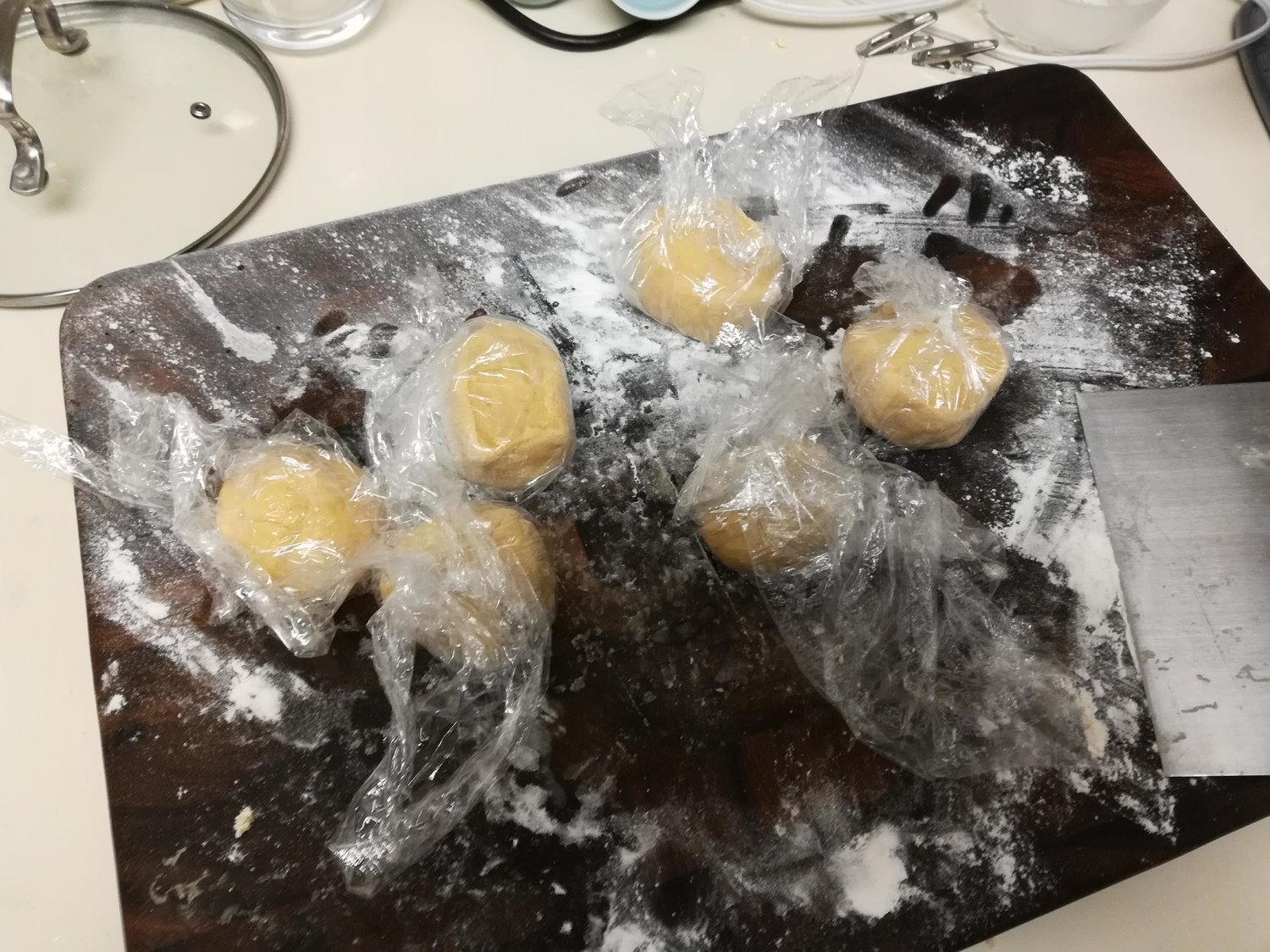 After removal from the fridge, each ball was rolled into a lasagna noodle. The ends were chopped off for aesthetic purposes. 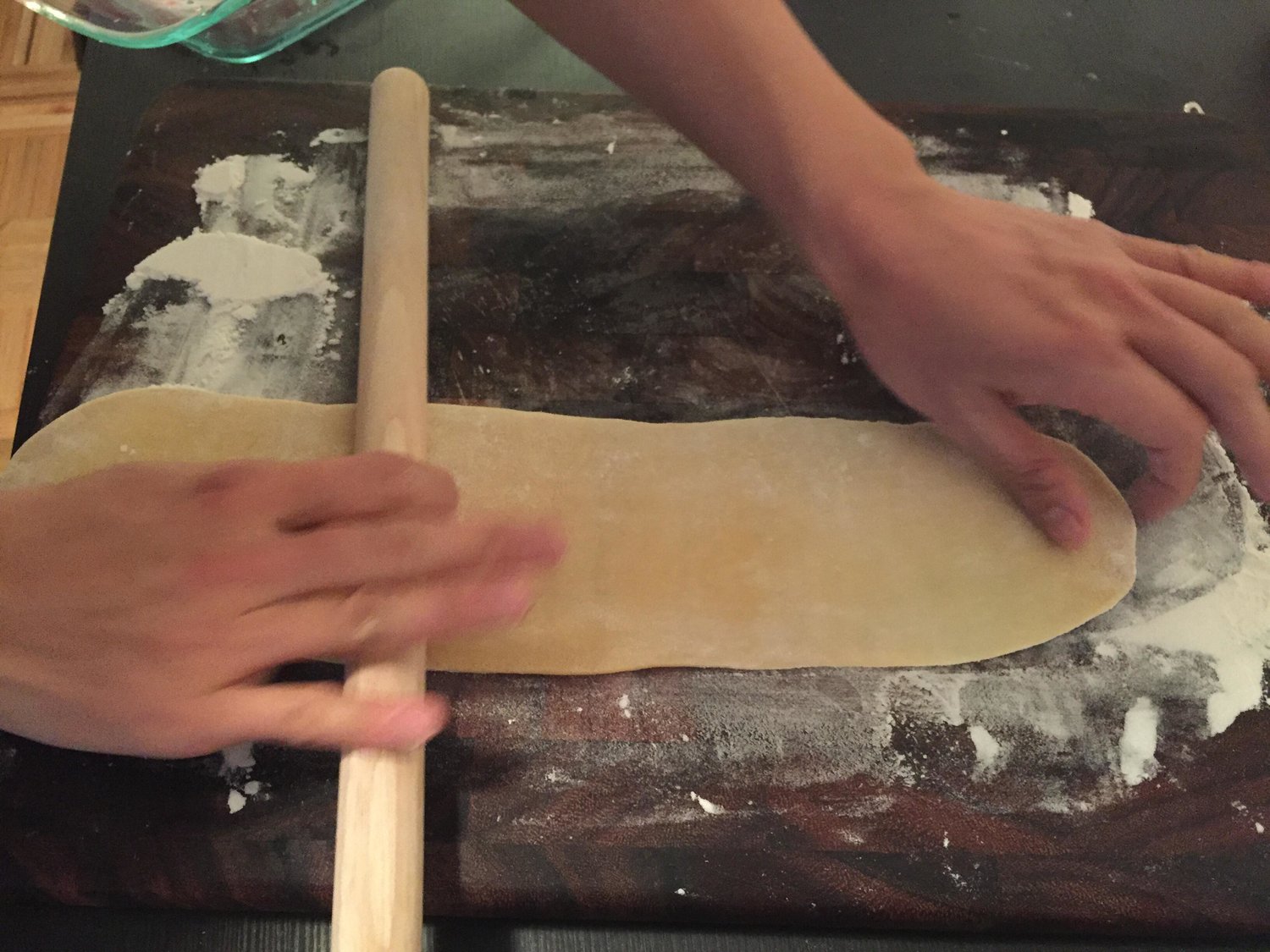 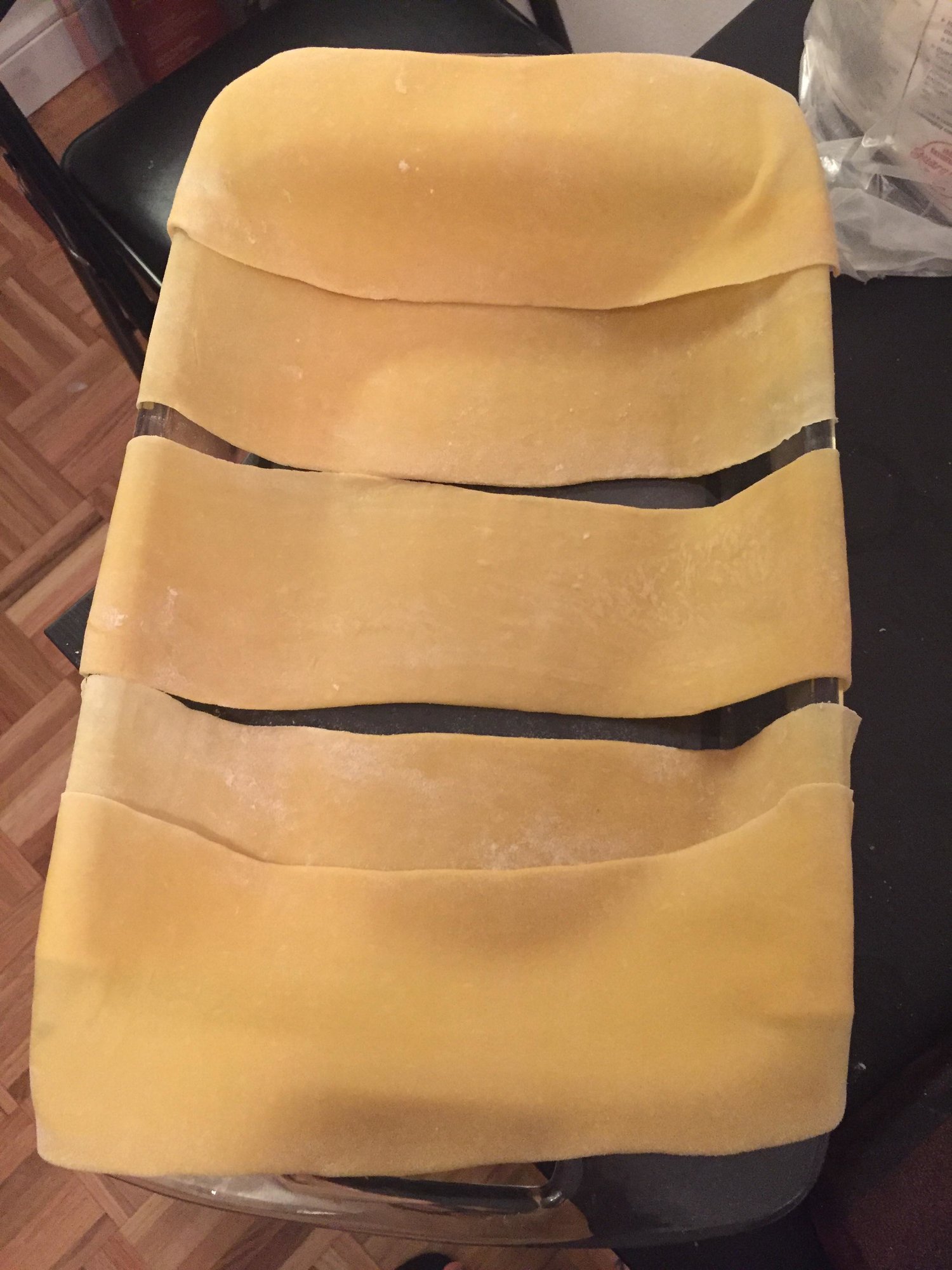 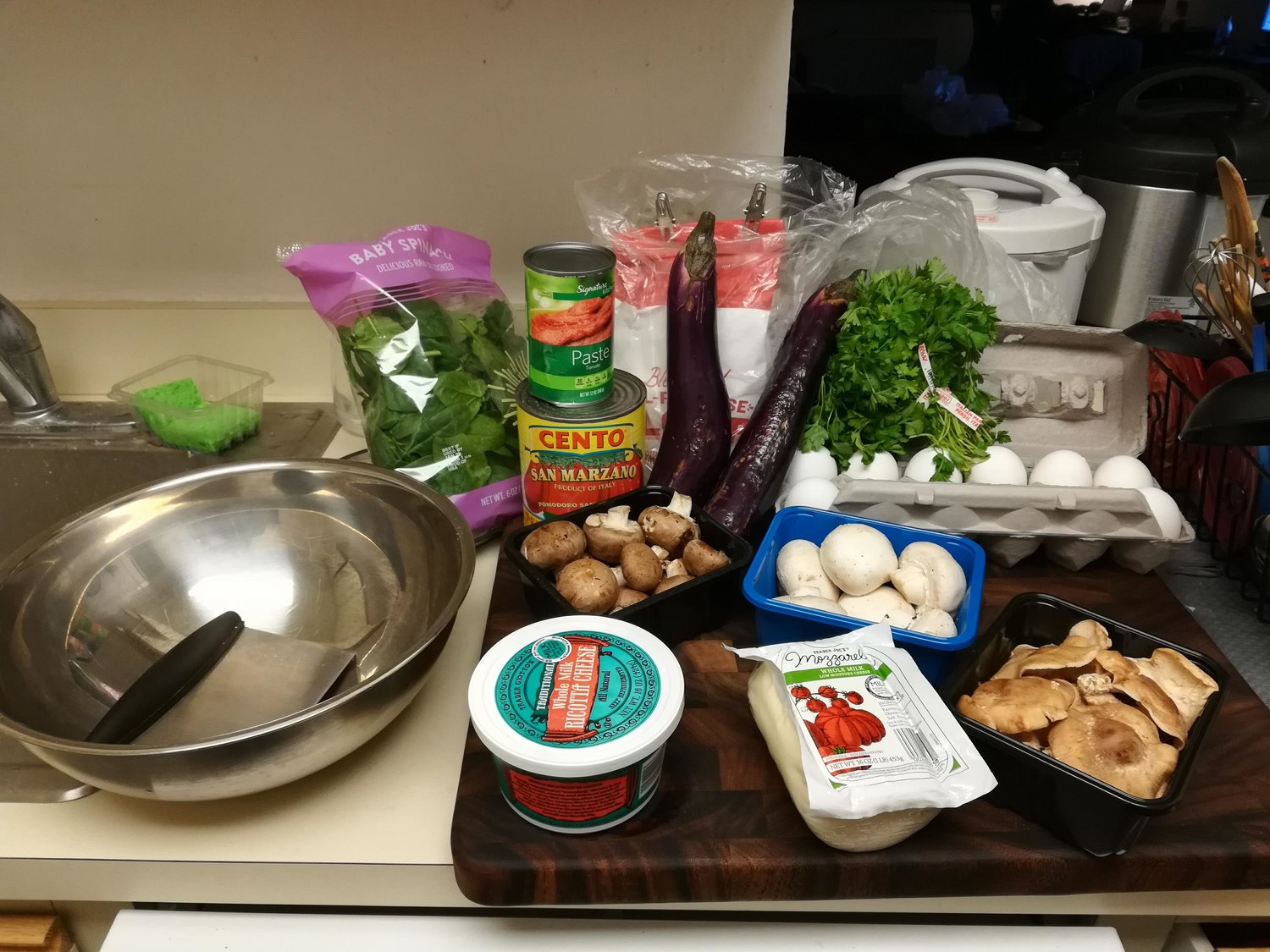 This is the easiest step, as it just involves dumping several ingredients into a pot. We just emptied the contents of the two cans of tomato products into the pot, then added the white wine and the gin (we used Tanqueray). Half an onion was chopped, browned, then added to the sauce. Some black pepper was also added to the pot. Finally, dashes of both fish sauce and worchestershire sauce were added to the pot in order to provide some balance to the strong tomato taste. The heat was turned on and the pot was left alone to reduce. 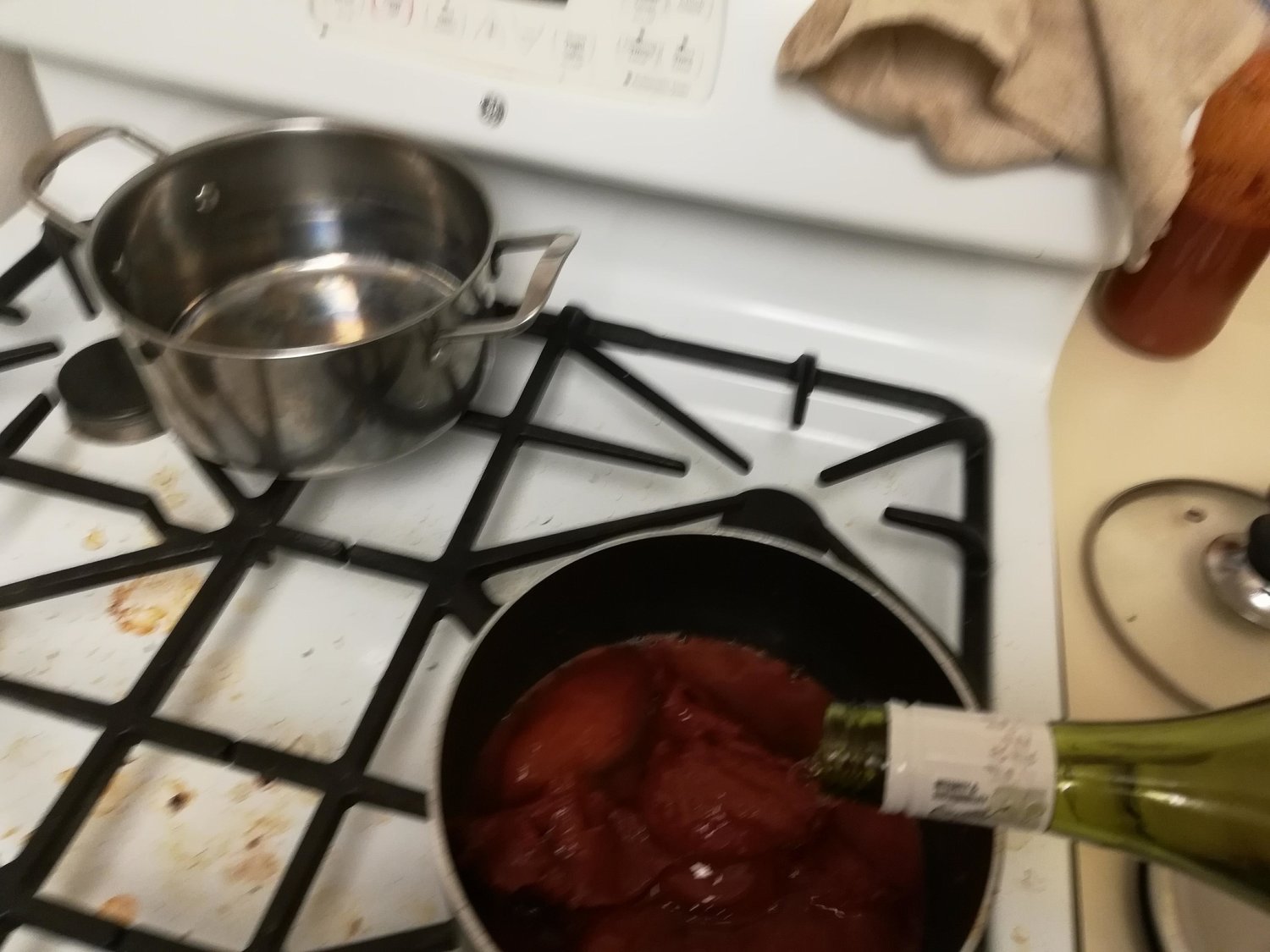 Half an onion was chopped and browned. The shiitake and cremini mushrooms were chopped into small chunks. These three ingredients were then mixed.
Separately, an eggplant was thinly sliced.
Again separately, the mozarella cheese was chopped into chunks.

This is the most fun step. We constructed the lasagna in a glass baking dish. Pre-heat the oven to 400F while assembling in order to save time. The construction of the lasagna can be summarized by the following steps:

The above steps were performed twice (i.e., two layers). To top off the lasagna, we used the following procedure:

The below image shows a partially-constructed lasagna, highlighting the layers. 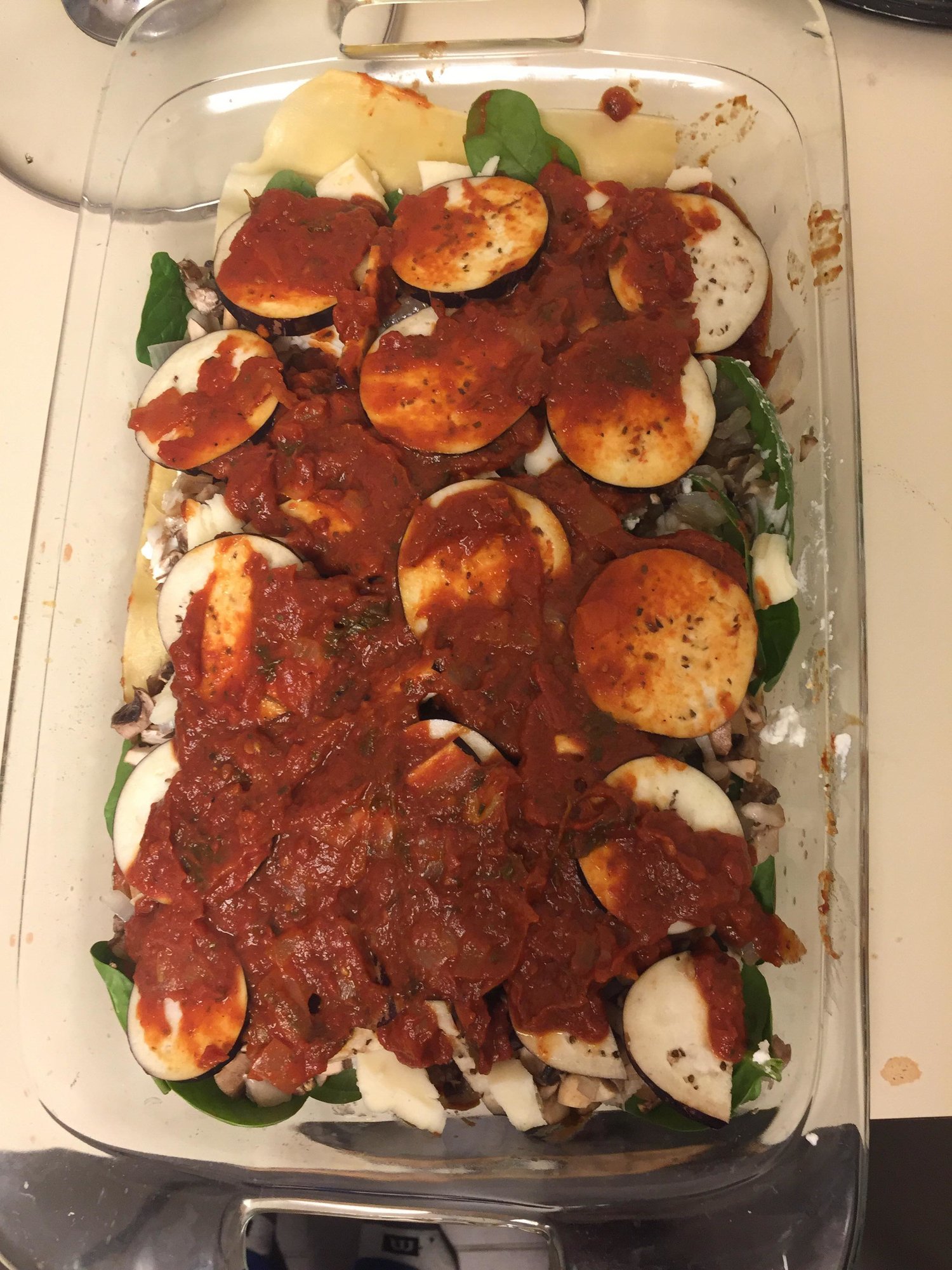 The below image shows a fully-constructed (but still uncooked) lasagna. 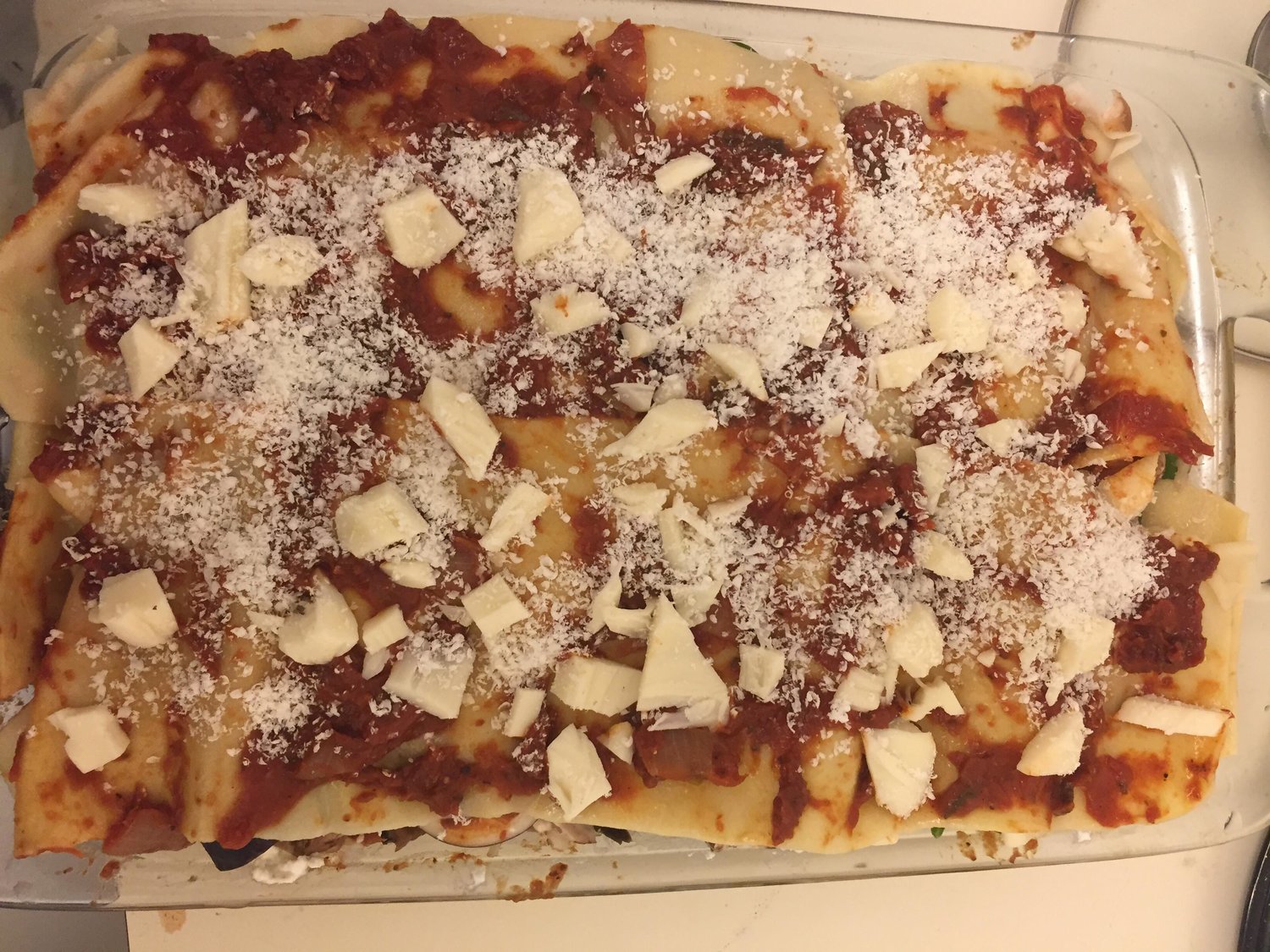 Finally, the lasagna is ready for cooking. The top of the baking tray was covered with aluminum foil and baked at 400F for 30 minutes. The foil was then removed, and the lasagna was allowed to bake for another 15 minutes. A slightly-charred lasagna emerged from the oven. 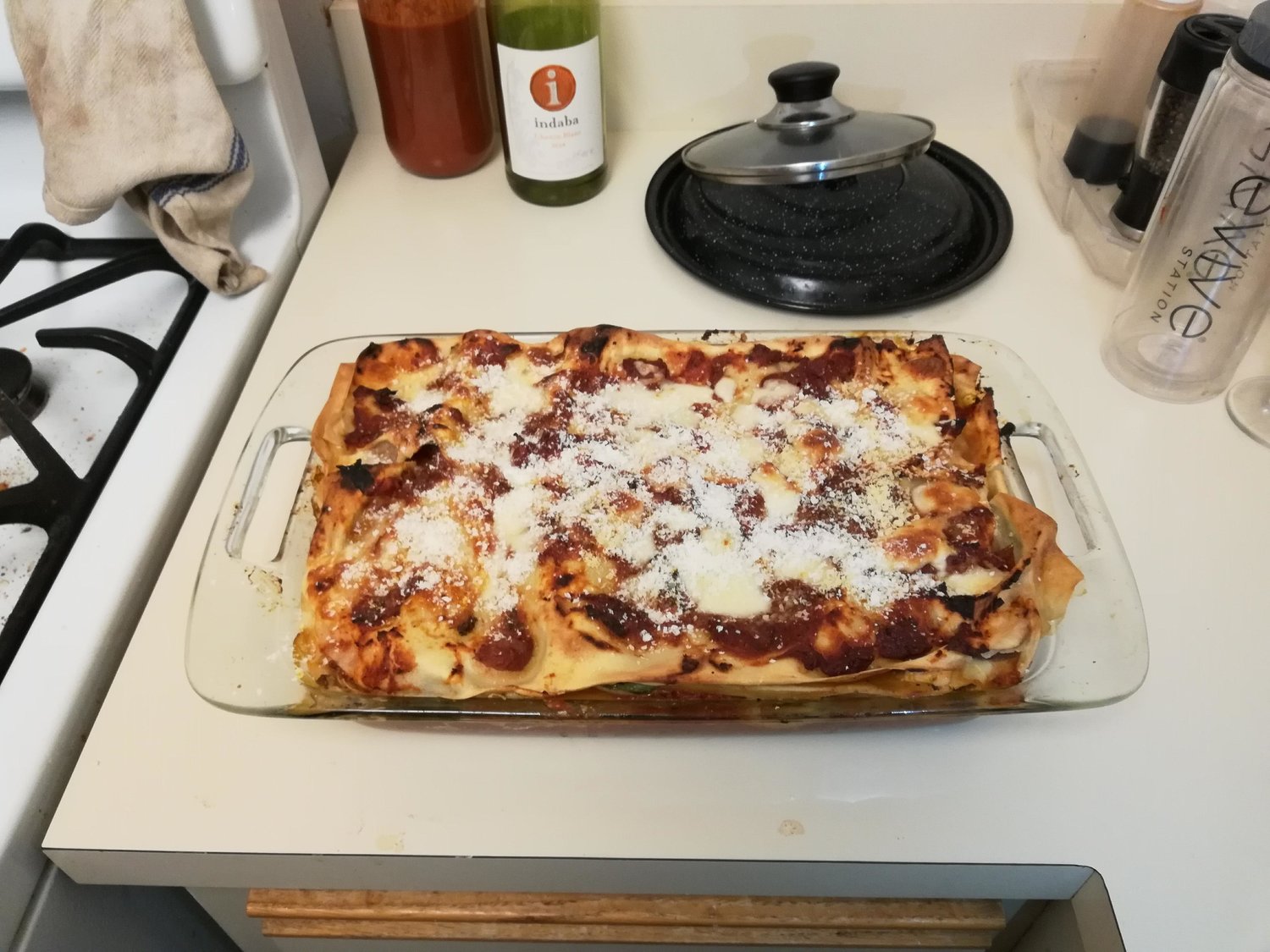 Lasagna tends to be difficult to cut cleanly, but RZ managed to slice a picturesque piece. 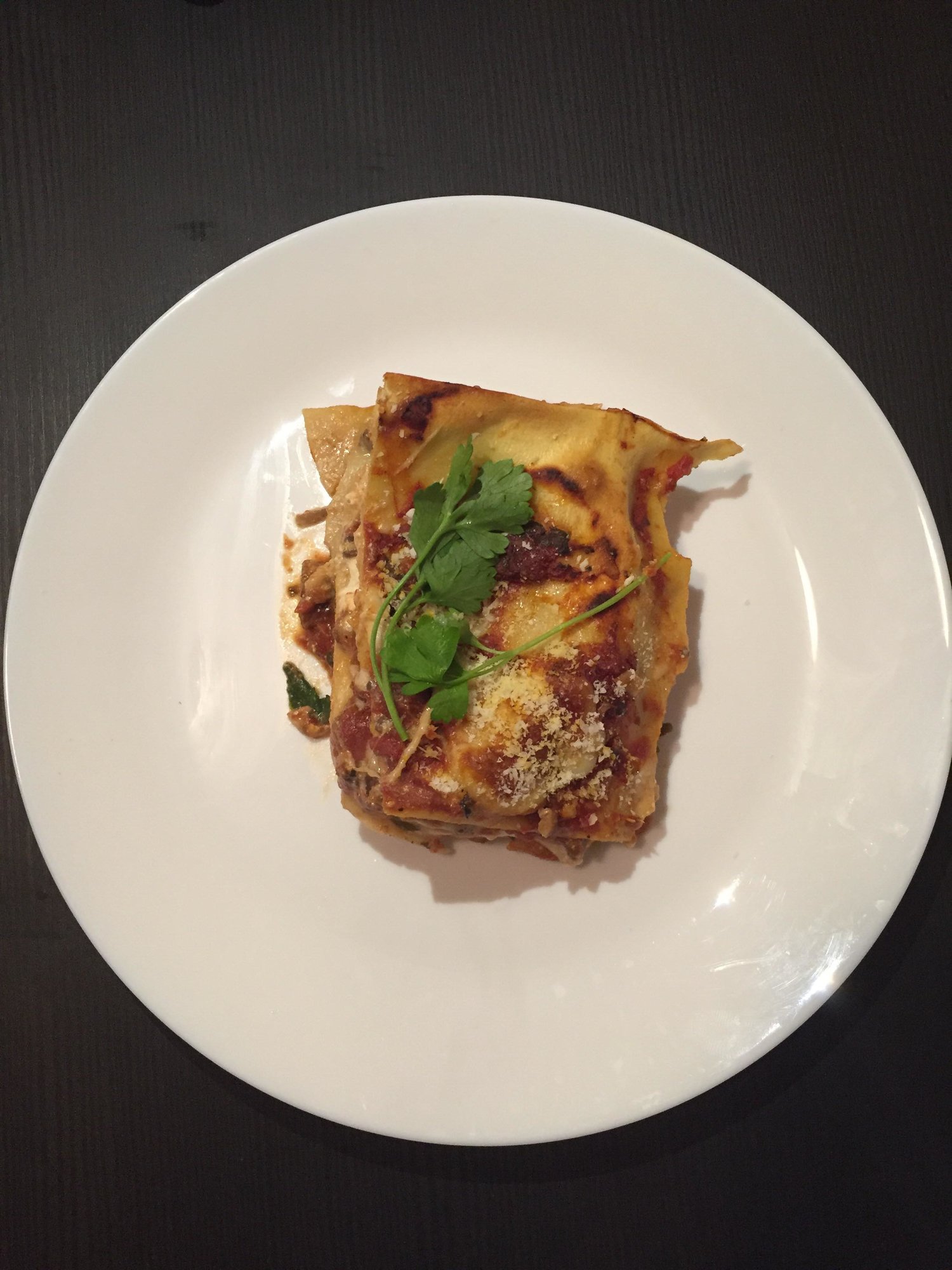 This lasagna exceeded all our expectations. The eggplant and the mushrooms deliciously complement the tomatoes and cheese. Despite being a vegetable-based lasagna, it was still quite heavy. It was easy to forget that there was no meat in the dish!

Some thoughts for next time: 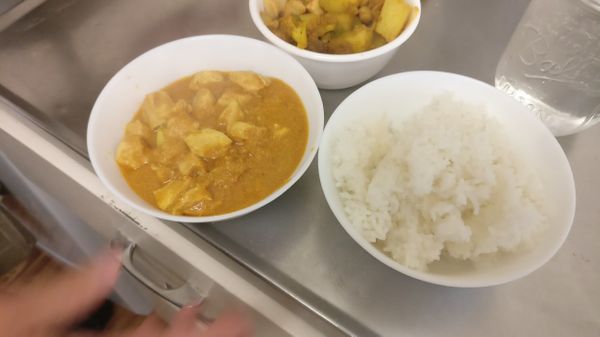 This recipe doesn't use fatty parts of chicken or excessive amounts of butter or cream, so apologies in advance. Ingredients 1 tbsp butter 1 onion 2 cloves garlic 1 knob 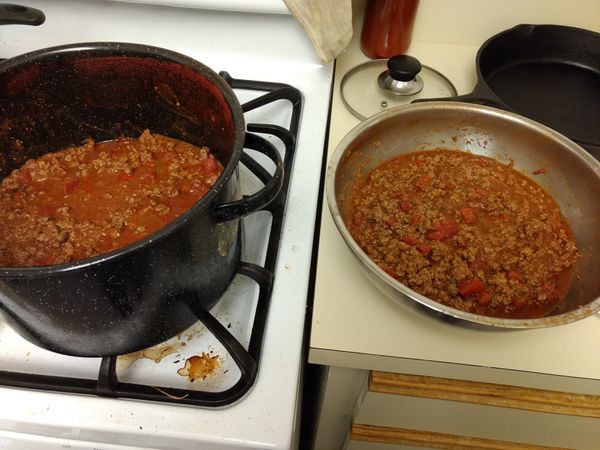 Nothing goes according to plan this week as I make a ground beef recipe. Inspired by a surprise meat grinder which showed up at my doorstep earlier last week, I